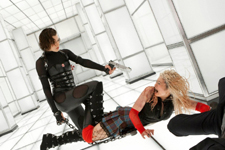 Nupur Barua / fullhyd.com
EDITOR RATING
4.0
Performances
Script
Music/Soundtrack
Visuals
5.0
4.0
4.0
6.0
Suggestions
Can watch again
No
Good for kids
No
Good for dates
No
Wait to rent it
No
The great thing about franchises (besides the numerous sequels that can be spawned) is the fan following. And Resident Evil has its share of fanatic enthusiasts, who are responsible for the staggering $700 million (almost) that the makers have managed to rake in so far.

Some statistics: Resident Evil: Retribution is the fifth movie of the series that is based loosely on the Capcom game, the second one to be shot in 3D, the fifth movie that Paul W S Anderson has written, the third that he has directed - all this in a decade and a half.

Quickly then, the plot. The opening credits are a slow-motion montage in reverse, of the attack on the cargo ship in the last movie. When the credits end, the same sequence plays in real time and ends with an explosion that knocks our Super Woman Alice (Milla Jovovich) overboard.

Cut to a very distorted and confusing montage that quickly recaps what happened in the past four movies - a deadly T-Virus was released, all those infected became zombies, Alice was the exception (she became super-strong after the infection), she beat up a lot of people, the world went to pieces, and then her powers were taken away.

Now, Alice is a blond housewife in a suburb, with a hearing-impaired daughter Becky (Aryana Engineer), and a charming husband Todd (Oded Fehr). As soon as you discover this about her, her family is attacked by zombies, and although she is rescued by Rain (Michelle Rodriguez), a zombified Todd attacks her.

But wait... that was not the real Alice. That was a clone. What a relief. The original Alice is still alive, held captive by the Umbrella Corporation (the T-Virus guys). She can go back to the surface (yes, all this nonsense can only take place underground/underwater) if she can manage to zip past the various artificially-simulated cities (NY, Tokyo, Moscow) that the Umbrella Corporation has built for their warped experiments.

Much like a video game, each level has a threat that needs to be eliminated. These include zombies, undead armies in tanks and on bikes, gigantic axe-men, and the humongous, monster-sized Licker, who eats humans. And just when you begin to think that Alice is rather frigid, she discovers Becky, who has been hiding in a closet (with a zombie, but both are unaware of each other). Alice gets about two minutes to establish a connection with the girl (enough to risk her life for her), before picking up heavy guns to continue with the shooting and the beating up (in her skin-tight costume, of course).

In short, there is no screenplay. Anderson was apparently too excited about getting to work with his wife (Jovovich) again to actually plot a screenplay. Alice does not seem to know why on earth she is doing whatever on earth she is doing - mostly killing everything that moves. The pathetic effort to give her a reason for living - Becky - is so lame that you almost cringe as stone-face Alice attempts an emotional moment.

Also, with her superpowers now gone, Alice has nothing much to look forward to anyway, which is why is she introduced to various blasts from the past, including a good Rain and a bad Rain, a good Carlos and a bad Carlos, and so on.

To celebrate a decade of mindless bloodshed, Anderson revisits virtual realities of cities that existed (in the movie) 10 years ago, before the T-Virus mutated living beings. If he is trying to make a statement here (read: environmental awareness), then it is lost somewhere between the slimy Licker's growls and the stilted dialogues that all the characters have to deliver.

The actors ham their way through the movie, even Milla Jovovich. Alice is a character that was designed specifically for the movies, maybe to give Kate Beckinsale and the Underworld franchise a run for their money. Whatever the intention, and despite the popularity of the series and shots of her half-naked, Jovovich remains cold and wooden. She also looks tired of being Alice in Apocalyptic Land, with the Red Queen getting more and more schizophrenic.

The other actors are in it for the money - you can tell. The men, specially, are like boys with toys, playing make-believe and having so much fun that they forget to act. Michelle Rodriguez grunts and breaks bones, while Sienna Guillory drifts in and out gracefully, and both of them look rather annoyed at being asked to reprise their roles in the previous films.

The visuals, on the other hand, are noteworthy. Anderson justifies the use of 3D by randomly throwing objects out of the screen at regular intervals. Some of the fight sequences are eye-catching, to be fair, and so are some of the CGI characters (Wesker may be one, too, given his strange body language, but that needs to be confirmed). Costumes are depressing. Music by tomandandy is the same grunge and electronica mix, albeit louder.

To all those who love the series, take heart. Resident Evil: Retribution may not be the best movie in the series, but it promises at least one more sequel, which Wesker hints at as being the beginning of the end. We are not sure if it will be the final movie, but there is always hope.
Share. Save. Connect.
Tweet
RESIDENT EVIL: RETRIBUTION (3D) SNAPSHOT 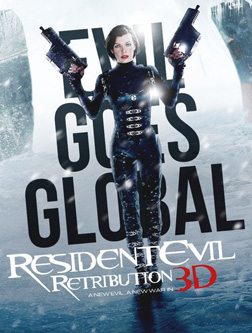 ADVERTISEMENT
This page was tagged for
Resident Evil: Retribution (3D) english movie
Resident Evil: Retribution (3D) reviews
release date
Milla Jovovich, Sienna Guillory
theatres list
Follow @fullhyderabad
Follow fullhyd.com on
About Hyderabad
The Hyderabad Community
Improve fullhyd.com
More
Our Other Local Guides
Our other sites
© Copyright 1999-2009 LRR Technologies (Hyderabad), Pvt Ltd. All rights reserved. fullhyd, fullhyderabad, Welcome To The Neighbourhood are trademarks of LRR Technologies (Hyderabad) Pvt Ltd. The textual, graphic, audio and audiovisual material in this site is protected by copyright law. You may not copy, distribute, or use this material except as necessary for your personal, non-commercial use. Any trademarks are the properties of their respective owners. More on Hyderabad, India. Jobs in Hyderabad.