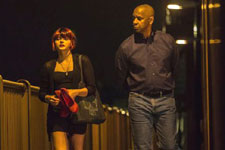 Nupur Barua / fullhyd.com
EDITOR RATING
6.0
Performances
Script
Music/Soundtrack
Visuals
6.0
5.0
6.0
7.0
Suggestions
Can watch again
Yes
Good for kids
No
Good for dates
Yes
Wait to rent it
No
"The two most important days in your life are the day you are born and the day you find out why." This line by Mark Twain is the opening of The Equalizer, based on the 1980s CBS series of the same name. The quote sets the mood for where the film is headed, but what does it mean by "the equalizer"? Simple, really, and quite self-explanatory, but you need to find out yourself.

Robert McCall (Denzel Washington) is a man with a past. These days he works in a hardware store, and is content leading a simple life. He is reliable and calm, and a little aloof, but popular enough. And he has an unlikely friendship with a teenage girl he calls Teri (Chloe Grace Moretz), who is actually a prostitute whose bosses are men from the Russian Mafia.

When Teri is hospitalised after some severe torture at the hands of her bosses, McCall finds himself reacting like the person he was earlier, before he promised his late wife that he would get away from it all. McCall tries the easy way first - to pay off Teri's debts, so that she can be a free person. His offer is rejected, and that is where the trouble begins.

The big boss of the Russian Mafia is Vladimir (Vladimir Kulich), and he is not happy with this turn of events. So he sends in his toughest right hand man, Teddy (Marton Csokas), to take care of McCall. And thus begins the clash between the ordinary McCall and the dangerous Teddy. McCall knows that he has to destroy Vladimir if he ever wants to live in peace again. However, before that, he has to teach Teddy a lesson.

If you have any idea of the 1980s shows, then the first thing that will strike you besides the changes in the movie, is how superficial McCall is, relatively. The series McCall led a complex life, but the film McCall just exists. True, he broods and seems to have a mysterious life, but that is all. To be fair, the character in the series could be explored well because it was a series. In the movie, both sides of his personality are introduced to you, without explanation.

He identifies one person, or rather group, that needs to be eliminated, and he spends all his time working towards that goal. The series McCall was more of a vigilante. Again, to be fair, the movie may become a series of vigilante movies, where McCall is The Equalizer, and either people ask him for help, or he jumps into situations that require his presence. In fact, the ending of the film leaves the possibility of a sequel wide open.

One of the most fascinating aspects of McCall's modus operandi is his ability to calculate the time he will take to handle a situation, to the exact second. How this plays out in action, you will have to see for yourself to understand. Unfortunately, these moments are too few.

McCall himself is a rather expressionless man, and even though his heart is in the right place, he can be dangerous. This is the main theme of the screenplay - if you push a common man too far, he will retaliate. Of course, McCall is no common man, given his history, but the story makes him relatable enough for you to empathise with him, and therefore root for him.

The Equalizer can be considered the equivalent of any Indian masala movie worth its salt. The emotions are glossed over, and the action becomes the most important aspect of the story. The plot points in this film revolve around McCall getting the better of Vladimir at every turn, and you know that McCall is going to overcome every obstacle. That however does not keep you from biting your nails (well, not really) in suspense every time the hero is in a fix.

Denzel Washington is apt casting for the role of Robert McCall. He does not say much, but his eyes reflect his change of mood as and when required - he looks harmless with the innocents of society, but menacing with the goons. Chloe Grace Moretz is terrific as the troubled teenager with a life-threatening problem. Like her co-star, she can go from innocent to evil depending on the people around her.

Bill Pullman and Melissa Leo make a cameo appearance, of sorts, which is a pity, because you would have liked to see more of them. Marton Csokas is scary enough to be the villain, and Vladimir Kulich is a great super-villain.

The production design, the clothes and the camera work all blend together to give The Equalizer a rather dated look. We are not sure if it is deliberate, but the movie looks like it was shot in the 1990s. The camera work in particular outdoes itself with the sequences in which McCall calculates his timing. The visual experience is gritty, and depressing, despite the colours. The film is over two hours long, and can get monotonous in parts, so maybe it could have been edited better.

Watch The Equalizer if you like action movies that are not too pretentious and do not claim to have the answer to life, the universe and everything. It is a feel-good film about good overcoming evil, and we need more of that in our world these days. This one is escapism and Utopian idealism at its best.
Share. Save. Connect.
Tweet
THE EQUALIZER SNAPSHOT 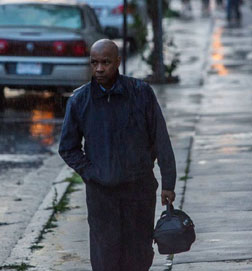 ADVERTISEMENT
This page was tagged for
The Equalizer english movie
The Equalizer reviews
release date
Denzel Washington, Marton Csokas
theatres list
Follow @fullhyderabad
Follow fullhyd.com on
About Hyderabad
The Hyderabad Community
Improve fullhyd.com
More
Our Other Local Guides
Our other sites
© Copyright 1999-2009 LRR Technologies (Hyderabad), Pvt Ltd. All rights reserved. fullhyd, fullhyderabad, Welcome To The Neighbourhood are trademarks of LRR Technologies (Hyderabad) Pvt Ltd. The textual, graphic, audio and audiovisual material in this site is protected by copyright law. You may not copy, distribute, or use this material except as necessary for your personal, non-commercial use. Any trademarks are the properties of their respective owners. More on Hyderabad, India. Jobs in Hyderabad.