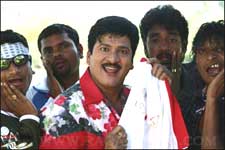 EDITOR RATING
3.0
Performances
Script
Music/Soundtrack
Visuals
NA
NA
NA
NA
Suggestions
Can watch again
NA
Good for kids
NA
Good for dates
NA
Wait for OTT
NA
Once upon a time, a Rajendra Prasad film was a true Vivaaha Bhojanambu. You’d find the entire pantheon of Telugu comic gods there – Velu, Veerabhadra Rao, Kota, Brahmanandam, Rallapalli, Tulasi, Subhalekha Sudhakar, Chandramohan, Nirmala, Gollapudi, Giri Babu… the works. The scripts were innovative, the exchanges were hilarious, the idiosyncrasies were uniquely side-splitting. These were movies for the entire family, and you were willing to write a testimonial at the end.

Once upon a time.

Iddaru Atthala Muddula Alludu is so low-budget, you’re surprised they spent money on the reel to show the titles. The entire film is shot in lesser outdoors than an average episode of an ETV serial, and perhaps lesser money. The scrimping extends into even whoever they hired to write the script and the dialogues, which is the entire pity.

Anyway, Balu (Rajendra Prasad) is an aspiring singer who comes to Hyderabad and meets up with his uncle Chandra (Suman), who has 2 wives (Sita and Kovai Sarala) who stay in neighbouring bungalows, and who hate each other. Chandra splits his time between them, and tells Balu to work as a servant in his houses so his wives do not consider him a burden.

Balu is street-smart and quickly ingratiates himself with both of them – and his heroics (yes, this one has Rajendra Prasad as an action hero) win over the daughters (Harathi and Keerthi Chawla), both of whom want to marry him.

Each of the wives takes it up as a personal challenge to get Balu to marry her daughter, and, unable to decide what to do, Balu and Chandra hatch a plot where Balu tells them that Chandra has committed suicide.

The wives are shattered, and, after being made to leave their bungalows by the finance companies which Chandra had borrowed from, move to a small house that Balu has searched for them. There the women bond, and the daughters get pally enough where each wants to sacrifice Balu for the other, causing a completely different problem now.

The film doesn’t have enough of the funny lines that characterize a pure-comedy film, nor the cast. Venu Madhav is the only other reputed comic actor, though he is in a completely independant and brief side-track. Kovai Sarala has a few moments, but what strikes you most about the film is the complete TV serial look.

It’s hard to see where Rajendra Prasad goes in his career. Does he migrate into the kind of roles he did in Hitler? Does he coalesce into the group of Chandra Mohan and SPB in becoming a father? Does he turn a character artist? Will people accept him in any of these? It all depends perhaps on a good director who finds him.

Until then, the erstwhile king should perhaps concentrate only on keeping old memories intact, instead of acting in films whose main theater will be Amaravathi.
Share. Save. Connect.
Tweet
IDDARU ATTALA MUDDULA ALLUDU SNAPSHOT

ADVERTISEMENT
This page was tagged for
Iddaru Attala Muddula Alludu telugu movie
Iddaru Attala Muddula Alludu reviews
release date
Rajendra Prasad, Kirti Chawla
theatres list
Follow @fullhyderabad
Follow fullhyd.com on
About Hyderabad
The Hyderabad Community
Improve fullhyd.com
More
Our Other Local Guides
Our other sites
© Copyright 1999-2009 LRR Technologies (Hyderabad), Pvt Ltd. All rights reserved. fullhyd, fullhyderabad, Welcome To The Neighbourhood are trademarks of LRR Technologies (Hyderabad) Pvt Ltd. The textual, graphic, audio and audiovisual material in this site is protected by copyright law. You may not copy, distribute, or use this material except as necessary for your personal, non-commercial use. Any trademarks are the properties of their respective owners. More on Hyderabad, India. Jobs in Hyderabad.