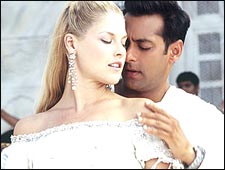 Ravi Mundoli / fullhyd.com
EDITOR RATING
3.0
Performances
Script
Music/Soundtrack
Visuals
NA
NA
NA
NA
Suggestions
Can watch again
NA
Good for kids
NA
Good for dates
NA
Wait for OTT
NA
It says something about Hyderabad's relationship with Salman Khan that he got more cheers and whistles and catcalls than Ali Larter in a form-fitting outfit. But by the time the ending of "Marigold" rolls around laboriously like a mediocre long-distance runner wheezing his way over the finish line, it becomes clear that not even Salman is going to save his "Marigold" from wilting.

It isn't clear whether "Marigold" was ever intended for Indian audiences in the first place. The original is entirely in English, and appears to have been made with a purely Western audience in mind. The dubbed slop that we're forced to endure sounds so stilted and lame that it can cure insomnia.

"Marigold" is about Marigold Lexton (Ali Larter), a spoilt and explosive American starlet with such masterpieces as Basic Instinct 3 and Indecent Proposal 2 to her credit, who arrives in India for a film shoot, only to find that the project has been canned and that she's stuck in Goa with no way of getting back Stateside.

Marigold ("phool ki tarah", as they ceaselessly remind us) gets hired by a Bollywood film director, mostly because she's blonde and available (for the movie). Needless to say, she has to learn the jhatkas and matkas that are to Bollywood actresses what addition and subtraction are to accountants.

Enter Prem (Salman Khan), the somewhat moody, strong silent sincere type choreographer, who helps Marigold, mainly by offering Yoda-style aphorisms on letting the music touch her soul and what not. Slowly they hit it off, and have interminably soulful conversations with each other. The audience, meanwhile, is getting very, very restless trying to figure out when the slapstick Salman comedy and the kissing and the fighting and the bare-midriff dancing and all the fun stuff is going to start.

Prem turns out to be a Rajasthani prince, estranged from his father (Vijendra Ghatge) and pursuing his Bollywood dream, like all normal Indian boys. Prem and Marigold make the trip to his ancestral haveli, where the rest of "Marigold" plays out, trying to resolve many standard Bollywood complications.

"Marigold" is full of spectacle - kitschy Bollywood sets and song-and-dance sequences, stupendous Rajasthani palace surrounded alternately and mysteriously by sandy desert as far as the eye can see and the lush greenery of lawns and foliage, Salman Khan acting etc. But for all that, it simply isn't a Bollywood movie - it's hanging in some limbo between Bombay and Boston, and heaven only knows how one is supposed to enjoy it.

As we have already noted, Salman Khan trying to act is a novelty in itself, and is something to be carefully avoided. Ali Larter, whose only memorable appearance on the big screen as far as we can tell involved her in whipped cream (and nothing else), is suitably irritating as a pricey American. Unfortunately, the dubbing totally and completely kills her lines and comebacks, and leaves everyone perplexed.

The rest of the cast is so-so. Suchitra Pillai as Rani stands out. Perhaps Gulshan Grover has the best role in the movie, because he only has to say one line, and otherwise just look like the menacing bodyguard he plays.

To sum up, if "Marigold" is to be avoided like the bubonic plague, the reason is in no small measure the dubbing of an essentially Western movie into an insipid Hindi version. Releasing the English version in multiplexes would probably have done more for the producers' balance sheet.
Share. Save. Connect.
Tweet
MARIGOLD SNAPSHOT

ADVERTISEMENT
This page was tagged for
Marigold english movie
Marigold reviews
release date
Salman Khan, Ali Larter
theatres list
Follow @fullhyderabad
Follow fullhyd.com on
About Hyderabad
The Hyderabad Community
Improve fullhyd.com
More
Our Other Local Guides
Our other sites
© Copyright 1999-2009 LRR Technologies (Hyderabad), Pvt Ltd. All rights reserved. fullhyd, fullhyderabad, Welcome To The Neighbourhood are trademarks of LRR Technologies (Hyderabad) Pvt Ltd. The textual, graphic, audio and audiovisual material in this site is protected by copyright law. You may not copy, distribute, or use this material except as necessary for your personal, non-commercial use. Any trademarks are the properties of their respective owners. More on Hyderabad, India. Jobs in Hyderabad.