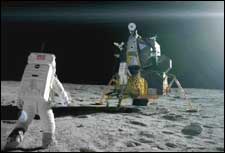 Priyanka Pulla / fullhyd.com
EDITOR RATING
7.0
Performances
Script
Music/Soundtrack
Visuals
NA
NA
NA
NA
Suggestions
Can watch again
NA
Good for kids
NA
Good for dates
NA
Wait for OTT
NA
The name is beautiful in its aptness. The surface of the moon is desolate but so sublime in its solitude and lifelessness, that it ends up as magnificent, rather than fearsome or ugly. And some scenes in Magnificent Desolation are just that - magnificently desolate, in 3D. To watch acres and acres of a chunk of stardust floating a quarter million miles away from the earth, to walk in its tranquil, yet mysterious darkness, to grapple with its mirages and illusions, and to survive in it, is a trippy experience.

In the precious few frames of footage of the actual moon that Magnificent Desolation allows us, the beauty comes through. The sombre brown rocks and deathly quiet are actually felt, and you are left longing for more. But that is where the movie loses out.

MD is a mix of actual footage shot on the moon, and lots and lots of inspirational talk seeking to baptise children into inter-planetary adventure seekers. Tom Hanks talks down to you, doing his best Uncle Tom impression, voice choked with enthusiasm, describing human (read American) conquests, and the strength and ambition that made them possible.

When you aren't watching the moon, you are seeing little 2D TV screens of history floating about, somewhat like in Aditya 369's time-machine, if you remember that Telugu Balakrishna starrer. There are Nickelodeon-style animated diagrams and jokes that seem patronising to adults. Sometimes all the baby-talk is irritating.

In the midst of those, like a trailer, come promising snapshots of rocky lunar desolation. They make you salivate, and then disintegrate like a cotton-flower in a tight fist. You want another glimpse, but all you get is a bunch of American school-children lisping their ill-informed aspirations about space-travel.

But you learn a lot too - you learn that moonwalking is nothing like what the erstwhile King Of Pop favoured, that travelling on the moon is not as easy as Tintin and Haddock's capers in Explorers On The Moon.

Every astronaut develops his own style of walking - waddling like a duck, or skipping like a Gazelle. The moon's atmosphere distorts distances, and you could stand on the lip of the Grand Canyon and think you are beside a ditch. Such scenes are shot with appropriate sensationalism, your jaw drops with horror when the delusion peels away.

Some intelligent CGI work and simulation has gone into fusing actual stereo images shot on the moon, to create the 3D affect. For example, when the lunar module lands, the dust rising into air is shown spinning with friction-free, unhindered violence. Instead of billowing into the air, the particles shoot out like missiles, and the 3D makes you feel like it's a sand-bomb bursting in your face.

There are voices of actual astronauts Buzz Aldrin, Neil Armstrong etc. alongside their Hollywood masqueraders Paul Newman, John Travolta, Matt Daemon and Mathew McConaughey, narrating nuggets of the precious Apollo mission experiences. Also shown is the projection of events in the imaginary scenario that the best-laid plans go awry. Eerie images of astronauts tripping forever on that monstrous, unmapped terrain are haunting.

In sum, here is a great movie to send your kids to, on an educational trip. You as an adult can find a few moments too, but they are tragically far-between. There will be better moon movies, this being the beginning of the IMAX 3D age after-all. Approach it in that humble spirit, and you will enjoy yourself.
Share. Save. Connect.
Tweet
MAGNIFICENT DESOLATION: WALKING ON... SNAPSHOT
MAGNIFICENT DESOLATION: WALKING ON THE MOON 3D SNAPSHOT

ADVERTISEMENT
This page was tagged for
Magnificent Desolation: Walking On The Moon 3D english movie
Magnificent Desolation: Walking On The Moon 3D reviews
release date
Tom Hanks, Brandy Blackledge
theatres list
Follow @fullhyderabad
Follow fullhyd.com on
About Hyderabad
The Hyderabad Community
Improve fullhyd.com
More
Our Other Local Guides
Our other sites
© Copyright 1999-2009 LRR Technologies (Hyderabad), Pvt Ltd. All rights reserved. fullhyd, fullhyderabad, Welcome To The Neighbourhood are trademarks of LRR Technologies (Hyderabad) Pvt Ltd. The textual, graphic, audio and audiovisual material in this site is protected by copyright law. You may not copy, distribute, or use this material except as necessary for your personal, non-commercial use. Any trademarks are the properties of their respective owners. More on Hyderabad, India. Jobs in Hyderabad.