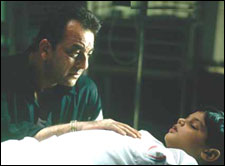 Neha Mathur / fullhyd.com
EDITOR RATING
3.0
Performances
Script
Music/Soundtrack
Visuals
NA
NA
NA
NA
Suggestions
Can watch again
NA
Good for kids
NA
Good for dates
NA
Wait for OTT
NA
If the Lord Of Movies has granted you His tathastu token (or you've read this review), you will not wither away like other Tathastu casualties, propped for nothing but a puny plot and a numbskulled Amisha Patel.

Tathastu paints a familiar landscape. It is the sordid struggle of lone ranger Ravi (Sanjay Dutt), waving his gun at the apathetic rules of a world hard-boiled to the common man's lament. Only, the film reveals itself to be a botched piece of work, thickly plastered with melodrama and dry didactism, and that's about it.

The first bit of the movie shuffles along. Ravi is a faceless constituent of the vast populace, a doting father and husband, and a diligent worker. This ordinary existence is savagely disrupted when his young son flounders and falls on the cricket greens. Gaurav (Yash Pathak) needs a miraculous heart transplant, and his father, fifteen lakhs for this imminent miracle.

The image of his limp son, in a hospital bed, floods Ravi with poignant memories of a happy past. These snapshots of domestic bliss are starkly juxtaposed with the numb indifference of insurance officers and factory bosses. The wretched father goes up every alley (even the shady ones), but every effort crumples into a futile "no".

Meanwhile, screechy Sarita (Amisha Patel) is insistently trying to play the aching mother. Her unceremonious wailing does little for her piddly performance. And what's with that perpetual clownish mouth-wide-open look? One fears her ever-widening grin will outrun her face.

Both father and son are battling against their respective deadlines. Ravi has only a single night left in which to gather the ominous amount. Politics stealthily creep in when another (more powerful) contender, Swamiji (ruling party leader), bids for the same heart reserved for Gaurav. The fifteen lakhs remain elusive, Ravi is at his wit's end, and his wife is breaking all records of screechiness.

Enter Sanjay Dutt in his pet mode - time for some gung-ho action, my friend. Armed with a gun, Ravi takes thirty people hostage in the waiting room of the hospital. Instantly the cops (surprise, surprise - on time!), the crowds (they're always on time) and the cameras (they're before time) flock the hospital grounds. The ruthless DCP (Gulshan Grover) is a no-negotiator, and his squad of snipers have their aim set - gun down the criminal.

Tathastu attempts to tickle a prickly issue. High-end healthcare is inaccessible to the majority, and this is the brutal truth. How does a man earning a measly Rs. 5,000 muster a massive Rs. 15 lakhs? Does he hold up a hospital waiting room?

Inside the waiting room, bizarre things happen. A woman gives birth to her first child, a domestic violence victim thrashes her husband, a stock broker realizes that money is bogus, and a prostitute claims Ravi is the "asli hero". The hostages cosy up to Ravi, "their hero".

He, like the Almighty, juggles their woes and sets them right. These interactions could have been intense but end up being a charade. The characters are tacky and they indulge in priggish moralizing. No good.

There's no Sanjay-Special bruise 'n' bumps kind of action - only Gulshan Grover gets socked by Sanjay Dutt. It's the climax that is this movie's crowning fall. With a gun to his head, Ravi decides to lend his own heart to his dying son. But just as the hysteria is reaching its peak and the trigger its target, along comes the crafty Mantriji who offers to give back the miracle heart (their party will collect a whole extra load of precious votes!). Phew!

Tathastu's storyline deserves to be chucked in the bin. And so does the manner of narrating it. Sanjay Dutt varies from maddened to mediocre. The rest are either trivial or barren performances. The kid's got cute, plump cheeks.

Like an irksome bee sting that smarts for a short while, this film will remain nothing but a bad two hours, by the end of this day.
Share. Save. Connect.
Tweet
TATHASTU SNAPSHOT

So odd that Neha Mathur didn't realise this movie is a remake of "John Q" starring Denzel Washington. If she would have known that, I think, she might have given this movie a star less. Still, you are doing a decent job Neha, be more careful in the future.Good luck, good bye.

ADVERTISEMENT
This page was tagged for
Tathastu hindi movie
Tathastu reviews
release date
Sanjay Dutt, Amisha Patel
theatres list
Follow @fullhyderabad
Follow fullhyd.com on
About Hyderabad
The Hyderabad Community
Improve fullhyd.com
More
Our Other Local Guides
Our other sites
© Copyright 1999-2009 LRR Technologies (Hyderabad), Pvt Ltd. All rights reserved. fullhyd, fullhyderabad, Welcome To The Neighbourhood are trademarks of LRR Technologies (Hyderabad) Pvt Ltd. The textual, graphic, audio and audiovisual material in this site is protected by copyright law. You may not copy, distribute, or use this material except as necessary for your personal, non-commercial use. Any trademarks are the properties of their respective owners. More on Hyderabad, India. Jobs in Hyderabad.