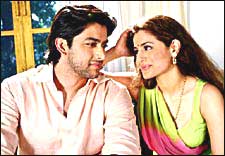 Neha Mathur / fullhyd.com
EDITOR RATING
3.0
Performances
Script
Music/Soundtrack
Visuals
NA
NA
NA
NA
Suggestions
Can watch again
NA
Good for kids
NA
Good for dates
NA
Wait for OTT
NA
How does Aristotle define a tragic drama? To put it plainly - that which sears the heart and brings on the boohoo. But what if this same drama leaves you blubbering, not with tears, only hee-haws? Then, either you belong to the nuthouse, or the drama belongs to the slaughterhouse. The second is true in this case.

Vikram Bhatt attempts to dramatize his lived life, or at least a rumored version of his life, through the utterance of the Ankahee dastaan. Sparked by his own extra-marital affair with Sush, Ankahee is the millionth domestic drama on cheat husband's hanky-panky. But that's not a disqualification. The feeling that you've downed your millionth gulp of cola and "the unsaid" is still crawling - now that's a debility.

The film kicks off with a great number, Tumse Yu Milenge, sung by Kunal Ganjawala. The poignant lyrics set the tone for Ankahee. Shekhar (Aftab Shivdasani) is a Skoda-driving surgeon, contently settled in happy matrimony with wife Nandita (Amisha Patel). They share a cheerful home with their sprightly daughter Sheena.

A happy home is a precarious commodity. None other than Miss World, Kavya Krishna (Esha Deol), saunters into this happy home and manhandles it. The poor-rich girl is lonesome, suicidal (and lethal), and latches onto Shekhar for solace. But soon midnight messaging, furtive phone calls and passionate ardor in Goa transform Shekhar from being a mere soother to full-time premi.

The illicit affair is splashed across a tabloid. Wifey dear, out with friends for a kitty lunch, finds out, and scrambles to the washroom for a time-out. A confrontation between with Shekhar ensues, and when he confesses his love for Kavya, Nandita marches to her house, and in between tremendous tears, lays the guilt thick and begs for her husband. Very soppy, indeed.

On Kavya's obsessive insistence, Shekhar asks for divorce. But his lover is not satisfied - she's a psychological wreck, and ultimately pulls off the final trick.

The film is a flashback, a diary narration by the dying father for his teenage daughter. What should have been a genuinely touching scene turns out to be a bag of laughs. Aftab as sick, old father looks nothing more than a sloshed chap with an uncouth stubble. Hrishita Bhatt as the grown-up daughter, though making a "guest appearance", does much better than some of the other regulars on the sets.

Ankahee bungles up in more than one ways. What should have been a complex emotional drama turns out to be a monotone and watery representation. The characters are not shaded. Nandita is the quintessential sati savitri. Though Kavya is made out to be convoluted, her screeching sequences tend to get monotonous.

Cheesy dialogues are aplenty. You can't help but laugh at some of the inane lines mouthed by the actors. Bad dialogue delivery doesn't help the cause. During the confrontation, Shekhar justifies his affair by saying that he is not the first man to commit adultery. Aftab is an average actor, but with logic like this, his performance dips further.

Esha Deol is intense, and plays the manic depressive convincingly. Only, the violent moods tend to spurt up every fifteen minutes. And the film seems to drag on and on and on. Amisha Patel is her silly self, though she does come through occasionally.

The lilting music is a major plus. Ek Pal Ke Liye and Tumse Yu Milenge merge well into the plot. The songs are beautifully shot, and are visual treats.

Pedestrian performances, stereotyical characerisation and a lack of connection with the viewer work against this film. Ankahee's progress report reads a "Could have done much better".
Share. Save. Connect.
Tweet
ANKAHEE SNAPSHOT

ADVERTISEMENT
This page was tagged for
Ankhee dastaan plot
Ankahee hindi movie
Ankahee reviews
release date
Esha Deol, Aftab Shivdasani
Follow @fullhyderabad
Follow fullhyd.com on
About Hyderabad
The Hyderabad Community
Improve fullhyd.com
More
Our Other Local Guides
Our other sites
© Copyright 1999-2009 LRR Technologies (Hyderabad), Pvt Ltd. All rights reserved. fullhyd, fullhyderabad, Welcome To The Neighbourhood are trademarks of LRR Technologies (Hyderabad) Pvt Ltd. The textual, graphic, audio and audiovisual material in this site is protected by copyright law. You may not copy, distribute, or use this material except as necessary for your personal, non-commercial use. Any trademarks are the properties of their respective owners. More on Hyderabad, India. Jobs in Hyderabad.