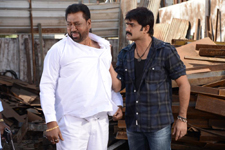 Deepa Garimella / fullhyd.com
EDITOR RATING
3.0
Performances
Script
Music/Soundtrack
Visuals
6.0
3.0
6.5
6.5
Suggestions
Can watch again
No
Good for kids
No
Good for dates
No
Wait for OTT
Yes
We're pretty sure Einstein's theory of relativity says something about time slowing down when you're watching a movie in which Einstein's theory of relativity is described by Shankar Melkote as "everything is connected" (or something to that effect). We didn't major in physics, but we're also pretty sure we saw the theory in action today, when we ventured to watch this movie called Kshatriya.

To give credit where it is due, Kshatriya is not as bad a film as several films out there are. However, it's not the kind of film that will stick around for beyond a couple of weeks - and hence, the rating. With a little help, Kshatriya could have been a hugely watchable movie. But alas, it's not, and that's that.

In the film, Srikanth plays a milkman-cum-loafer-cum-generic-goonda who is hired by goons (Jayaprakash Reddy, Narsing) to stalk a girl (Kumkum) who has just returned from abroad to live in a desolate bungalow. Apart from these goons, the girl has one other deadly foe - her grandfather (Kota Srinivasa Rao).

The grandpa uses the services of black magic to unleash upon her ghosts, apparitions and strange occurrences. These ghostly effects are about as scary as a baby's sneeze, and the lady is smart enough to dismiss them as hogwash. But the relentlessness of these happenings force her to see a psychiatrist (Rao Ramesh), who sits her through therapy sessions that consist of images of optical illusions.

But as we discover, the girl has a mysterious past. She is in fact heir to a secret treasure, the map and clues to which her father burnt before dying in a family feud. Together with a history professor (Vijay Chander), the hero and heroine get to the bottom of whatever is happening.

In the last half an hour, the film transforms into a sort of sunset-pastel-shaded desi Temple-Run-meets-Indiana-Jones. Too little, too late. Too bad.

The clues and speculation seem intriguing - mildly - but the way the characters hit upon the solutions is abrupt. People seem to just think up the answers. In one ridiculous scene at the end, at a fort, Srikanth actually visualizes the entire undergound route to the treasure, with no inputs other than the fact that the treasure is understood to be hidden under one among dozens of wells in the fort.

This apart, there are no dialogues worth mentioning, no comedy, and nothing exciting happening other than the basic plot. The editing is haphazard, leading to abrupt scene changes.

Srikanth and Kumkum do a pretty good job as leads, and there is surprisingly zilch romance portrayed between the two, other than the fact that the guy initially takes a fancy to the girl. There are no dream sequences or romantic songs. This is one of the things nice about the film - it stays focused (the question, of course, is, "Who cares?").

Sai plays the hero's sidekick, and tries to stay entertaining. Rao Ramesh, who has a lot of screentime, hams it up. All the other senior actors seem lost.

Surprisingly, the cinematography and the background score are good. There are two unnecessary songs that could have been done away with, though.

Don't bother with Kshatriya. There are zillions of other ways in which you can slow down time.
Share. Save. Connect.
Tweet
KSHATRIYA SNAPSHOT 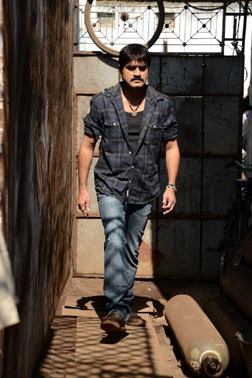 ADVERTISEMENT
This page was tagged for
kshatriya by shudeer Babu full tamil movie telugu movie
kshatriya telugu movie hero name
kshatriya telugu movie
kshatriya movie telugu wiki
Telugu Kshatriya moviestory
Follow @fullhyderabad
Follow fullhyd.com on
About Hyderabad
The Hyderabad Community
Improve fullhyd.com
More
Our Other Local Guides
Our other sites
© Copyright 1999-2009 LRR Technologies (Hyderabad), Pvt Ltd. All rights reserved. fullhyd, fullhyderabad, Welcome To The Neighbourhood are trademarks of LRR Technologies (Hyderabad) Pvt Ltd. The textual, graphic, audio and audiovisual material in this site is protected by copyright law. You may not copy, distribute, or use this material except as necessary for your personal, non-commercial use. Any trademarks are the properties of their respective owners. More on Hyderabad, India. Jobs in Hyderabad.