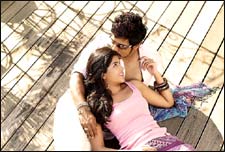 Deepa Garimella / fullhyd.com
EDITOR RATING
5.0
Performances
Script
Music/Soundtrack
Visuals
8.0
4.0
6.0
7.0
Suggestions
Can watch again
No
Good for kids
No
Good for dates
Yes
Wait for OTT
Yes
Veedinthe is a standard-issue formula movie with pretty much all the normal ingredients in place, and would have been a fun watch if it weren't for the fact that it doesn't aspire for a lot. Vikram, who is clearly in a playful mood, embraces his masala-movie self in this film, daring you to look away from his spiked hair and red jeans.

The plot is about the real estate mafia in, well, Tamil Nadu (actually called, FYI, Andhra Pradesh). This land mafia is led by a ruthless and power-hungry corrupt politician referred to as Akka (Sana - a lady usually seen in sister roles in Telugu films).

An elderly man called Dakshina Murthy (K Viswanath) is a victim of one such land-grabbing activity, and Sankar (Vikram) comes to his rescue. But the old man isn't saved for long, as his own son has set out to cheat him of his land - one on which an orphanage stands.

This is a predictable movie with noisy fights, and one that could have worked well if it had some good ol' Telugu style comedy by Brahmanandam, Ali and the gang. All we have here is venerable K Viswanath doubling as love guru to the tackily dressed Sankar, bragging about his own Casanova skills when he was young. It's not very offensive, but it's not very funny either.

And if the unoriginal plot tests the limits of your indifference to whatever is happening on screen, the whole deal of this being a dubbed film is likely to blow it.

Vikram cannot help being a fantastic actor, but here's a note to him: Age is catching up. This is not the time for blue sideburns and orange trousers. We're not saying that every movie of your needs to be a Nanna - you can give us cool, fun commercial films, while acting your age and looking great.

K Viswanath has a dialogue or two ("Kamal Haasan ki natana nene nerpindi") to remind us of who he actually is. This is definitely not a memorable role, but it does give him more screen-time than the ones he has been given in recent years.

Sana is quite good as the politician, and gets to hog quite a bit of the limelight. Pradeep Rawat, on the other hand, is relegated to a fight and 4 scenes.

Deeksha Seth has little to do except evoke strong memories of the innocent-looking Divya Bharathi. A few songs are all she's given.

Yuvan Shankar Raja is a let-down. His songs lack melody or soul. The visuals are good, though.

ADVERTISEMENT
This page was tagged for
Veedinthe telugu movie
Veedinthe reviews
release date
Vikram, Deeksha Seth
theatres list
Follow @fullhyderabad
Follow fullhyd.com on
About Hyderabad
The Hyderabad Community
Improve fullhyd.com
More
Our Other Local Guides
Our other sites
© Copyright 1999-2009 LRR Technologies (Hyderabad), Pvt Ltd. All rights reserved. fullhyd, fullhyderabad, Welcome To The Neighbourhood are trademarks of LRR Technologies (Hyderabad) Pvt Ltd. The textual, graphic, audio and audiovisual material in this site is protected by copyright law. You may not copy, distribute, or use this material except as necessary for your personal, non-commercial use. Any trademarks are the properties of their respective owners. More on Hyderabad, India. Jobs in Hyderabad.