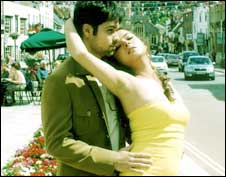 Priyanka Pulla / fullhyd.com
EDITOR RATING
5.0
Performances
Script
Music/Soundtrack
Visuals
NA
NA
NA
NA
Suggestions
Can watch again
NA
Good for kids
NA
Good for dates
NA
Wait for OTT
NA
There are two kinds of movies. The ones that start off with a classy premise, and somewhere down the line, careen into a load of claptrap. And there are movies born into the trash genre, yet slowly and inconspicuously climb their way up into a certain offbeat stylishness. It is this second kind to which Aksar belongs, thankfully.

Aksar was obviously conceptualized as the next in the sequence of movies that began with Murder. Emraan Hashmi, an unhappy wife, an inscrutable husband, a string of wet smooches – you know the works. The brittle and flaky story holding it all together is this.

Ricky Mishra (Hashmi) is a playboy photographer who sleeps with every one of his models to get to ‘know’ her better and dumps her after getting her into the mood and getting his snap. Sheena Roy (Udita Goswami) is the gorgeous and nutty model who prefers to resolve all her issues by smashing whatever is around her to smithereens.

When Nisha (Tara Sharma), Sheena’s friend, is also similarly dumped by Ricky, and tries to commit suicide, Sheena swears lifelong enmity with Ricky. To inaugurate it, she chucks a dumbbell at his expensive camera.

Cut to three years later, and Ricky, of the supercilious sneer and a constant, thorny, Scooby-Doo-like stubble, needs some dough immediately and is setting up a grand exhibition of his photos for it. Rajvir Singh (Dino Morea), a millionaire from Manchester, walks in with as much of a swagger as he can manage without looking like a closet queen, and offers to buy up all the paintings for Rs. 30 lakhs.

Ricky is happy but suspicious. And soon enough, he realizes he has reason to be. Rajvir wants him to seduce his wife, none else but Sheena, so he can get the divorce she is otherwise unwilling to give. The rest of the story is a mix of murder, mystery, and tons of steamy scenes, as Ricky goes about his seduction but sees things suddenly go awry.

What shifts the entire track of the movie to a certain Sidney Sheldon style hauteur, is the placid, overcast shots of the English countryside, the English mansion where the movie is mostly shot, and the relaxed, almost novel like pace at which the movie moves. Every scene is clearly etched, written in an elaborate hand, spelt out languorously.

Anyone coming to watch Aksar has to be coming for the erotica, at least as one among other things. Well, Aksar has enough hot scenes to get the embers glowing, no matter what your taste. Udita Goswami looks gorgeous, although she unfortunately wears just one single expression throughout the movie. It gets tiresome very soon.

Dino Morea is adequate as the savvy and manipulative millionaire who holds the puppet strings of everyone else. Hashmi is like the circus ropewalker who is around for that one solitary act that he can do – he carries it out and leaves.

The music by Himesh Reshammiya is indistinguishable from any other he has ever churned out. If you loved it once, you will love it again here.

Aksar, en fin is like an ethical drug – created for a specific purpose and prescribed for that. Watch it for its fervid scenes of entangled bodies, some chichi costumes, some ritzy sets. Period. It does that job for you admirably. Anything more or less, Aksar will only repulse you. Don’t say we didn’t warn you then.
Share. Save. Connect.
Tweet
AKSAR SNAPSHOT

ADVERTISEMENT
This page was tagged for
Aksar hindi movie
Aksar reviews
release date
Emraan Hashmi, Dino Morea
theatres list
Follow @fullhyderabad
Follow fullhyd.com on
About Hyderabad
The Hyderabad Community
Improve fullhyd.com
More
Our Other Local Guides
Our other sites
© Copyright 1999-2009 LRR Technologies (Hyderabad), Pvt Ltd. All rights reserved. fullhyd, fullhyderabad, Welcome To The Neighbourhood are trademarks of LRR Technologies (Hyderabad) Pvt Ltd. The textual, graphic, audio and audiovisual material in this site is protected by copyright law. You may not copy, distribute, or use this material except as necessary for your personal, non-commercial use. Any trademarks are the properties of their respective owners. More on Hyderabad, India. Jobs in Hyderabad.