And so ladies and gentlemen, here I am with the most recent Chiru-starrer, complete with Benaras and Jala-Yagnas... Indra! Hip Hip Hooray! 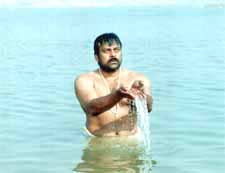 Indra begins with the depiction of some gruesome communal-annihilations between Indra and Sivareddy's factions. Indra (do I need say who it is?) - Indra Sena Reddy - is a peace-loving factionist (tongue-in-cheek, ain't it?). Plainly, he is one guy who does not have to raise the roof to get his point across - all he has to do is raise an eyebrow.

One fine day, Indra notices that there is dire need for rains in seema, and right away begins the Jala-Yagna. Without more ado it begins raining, and then there is this ghanana-ghanana-ghana sequence and a song flicked from Lagaan. After that, in the best interest of the people of Rayalaseema and for the construction of a reservoir, he forfeits his whole property and hits the road to Kasi. What remains is why and how he returns to seema, and how he establishes peace through war. 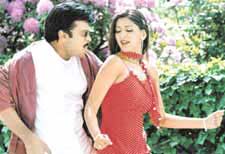 Chiranjeevi, the yesteryear dancing dude, is back into his elements with this movie. We must say it's very hard not to notice Chiru's brand new dance-dude avatar. The chances of someone not enjoying Sonali in Indra are analogous to her waistline... slim or none. The casting of Aarti Agarwal as the like of Neelambari in Narasimha is a bit hard to digest, though.

The Paruchuri Brothers do their usual gig by packing a lot of meanness and menace into sentences of just 10 syllables. Unexpectedly, the quality of music and background score from Mani Sharma is mediocre, which turns out to be one of the stumbling blocks for the movie. 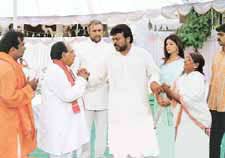 The glaring downside of the movie is its done-to-death factionist theme. And we guess that by boarding the faction-flick bandwagon, Chiranjeevi must have validated the Theory Of Morphic Resonance like never before (Theory Of Morphic Resonance, also known as The Law Of The Thousandth Monkey: When the thousandth monkey in a tribe begins to behave in a certain way, suddenly entire unrelated tribes all over the monkey kingdom begin to spontaneously adopt that behavior pattern.). The second downside of the movie is the inconsistency echoed in Chiranjeevi's character, which keeps wavering between those of a bloodthirsty murderer and a peace-loving philathropist. 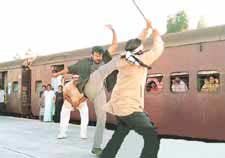 Indra, with "supreme" dances and a rough-n-ready performance by Chiru, is a Chiru fan's dream come true. At the same time, with its downsides and clichéd storyline, it is almost bound to fall short of an average cinegoer's expectations. All in all, it presents two distinct images: a sumptuous cinematic treat for Chiru fans, and a clichéd tale of communal-annihilation for the unfortunate rest. So, which finger are you choosing?
Share. Save. Connect.
Tweet
INDRA SNAPSHOT
See Indra full details
INDRA USER REVIEWS
1 - 15 OF 153 COMMENTS  |  NEXT  |  LAST
POSITIVE  |  NEGATIVE |  NEWEST  |  OLDEST  |  MOST HELPFUL  |  LEAST HELPFUL
USER RATING
7.0
1290 USERS
Performances
Script
Music/Soundtrack
Visuals
9.0
9.0
9.0
8.0
Can watch again - Unsure
Good for kids - Unsure
Good for dates - Unsure
Wait for OTT - Unsure
Saravanan on 10th Jul 2004, 5:14pm | Permalink
hi guys My mother tongue is tamil and i understand little telugu i started seeing telugu movies only after seeing chiranjeevis movies like konda veetti donga, gangleader etc u know these movies dont come to chennai i saw these movies when i visit thirupathi. I saw indira after seeing that sitar dance infact the songs are good with chiranjeevi dances excellently in fact u people have to accept the fact that the first hero to dance gracefully is chiranjeevi . u have to watch the older actors like krishna dance in their movies. Anyway i liked this movie for chiranjeevi's dance and the songs
RATING
10
Raj Sekhar on 19th Jul 2003, 2:38pm | Permalink
Chiru uncle!!! Better take rest and don't waste our time.
RATING
2
Suresh on 15th Sep 2022, 1:24am | Permalink
Why
Madhu Babu on 5th Nov 2002, 6:02pm | Permalink
Mr. Chiranjeevi, it is ur best film. I give one quotation: "Thodakottina vamsanni padagottina konidaala vamsam". U r the best. All the best with your coming films. I love u Chiru!
RATING
10
Karthik H on 2nd Nov 2002, 10:28am | Permalink
em cinema chesavu guru, yenni saarlu chusina malli malli chudaalanipisthondhi. johny cinema thondarga release cheyyamani mee thammudiki cheppu guru!
RATING
10
Me And Me Only on 1st Nov 2002, 3:49am | Permalink
As in the review its good only if one is a chiru fan otherwise its acliched story line with the heavy metal dialogues..take out balakrishna from samarasimhareddy and put in chiranjeevi and lo and bhole here he is INDRA
RATING
6
Iitjee2003 As on 23rd Oct 2002, 10:51am | Permalink
Excellent movie! Hope he really contests from Kuppam and becomes the Chief Minister of AP, bringing the TDP rolling!
RATING
10
Ramani on 21st Oct 2002, 9:46am | Permalink
The movie is definitely worth watching... it is better than the earlier faction movies. Chiru is really very handsome and he excels in all aspects like dances, acting etc. He proves once again that no one can beat him.
RATING
10
Srinivas Chakri on 19th Oct 2002, 7:17am | Permalink
it simply sucks. why the hell did a star like chiru follow this outdated trend? it's not worth rating this movie.
RATING
2
Ashok Vytla on 8th Oct 2002, 8:06pm | Permalink
CHIRU is Amazing in the movie.Performance is extra ordinary.Movie is overall kathi(dialogues,dance,fights ....)
:))
RATING
10
Krishna Gara on 5th Oct 2002, 5:22am | Permalink
Entertainment at its best. Paisa vasool.
RATING
8
Ramj on 2nd Oct 2002, 12:57am | Permalink
Worst movie
RATING
2
Chinna Ramuleru on 2nd Oct 2002, 12:57am | Permalink
Great Movie! No more words need to be said...
RATING
10
Jayaraman Rage on 29th Sep 2002, 4:51am | Permalink
nobody can beat chiru
RATING
10
Sudhir Gholkar on 17th Sep 2002, 5:01pm | Permalink
Wow is the only word i could say to Chiru's Dance sequences in this movie.I danced the same Way in Cyber Towers !.
RATING
10
Satish Motipalli on 16th Sep 2002, 3:04am | Permalink
Simply superb!!!!! Are these stars meant for you to express how good the film is? Then here it goes *******************************
RATING
10
1 - 15 OF 153 COMMENTS  |  NEXT  |  LAST
LEAVE A COMMENT
fullhyd.com has 700,000+ monthly visits. Tell Hyderabad what you feel about Indra!
MORE MOVIES
Latest Reviews
Writer Padmabhushan
Michael
Hunt
Pathaan
Waltair Veerayya
more
Veera Simha Reddy
Top Gear
18 Pages
Dhamaka
Connect (Telugu)
Avatar: The Way of Water
Panchathantram
Gurtundha Seetakalam
Violent Night
Matti Kusthi
Contemporary Reviews
Goal
Gadar
Khoya Khoya Chand
I Am Legend
Pourudu
more
Tagore
Munna
Yamadonga
Saawariya
Chak De India
Aaja Nachle
Raghavan
Nenunnanu
Hello Premisthara
Random Reviews
Commando (Telugu)
Sri Raja Rajeswari
Love In America
Terminator 3 Rise Of The Mac...
Ab Tumhare Hawale Watan Sath...
more
Angels & Demons (Telugu)
Salt (Hindi)
Final Destination 5 (Hindi)
The Bourne Legacy
Dalam
How to Train Your Dragon 2
Where Is Vidya Balan
Gautamiputra Satakarni
Bioscopewala
Donga
SEARCH MOVIES
Dissatisfied with the results? Report a problem or error, or add a listing.
ADVERTISEMENT
SHOUTBOX!
{{todo.name}}
{{todo.date}}
[
ip{{todo.ip}}
]
{{ todo.summary }}... expand »
{{ todo.text }} « collapse
First  |  Prev  |   1   2  3  {{current_page-1}}  {{current_page}}  {{current_page+1}}  {{last_page-2}}  {{last_page-1}}  {{last_page}}   |  Next  |  Last
{{todos[0].name}}

ADVERTISEMENT
This page was tagged for
telugu endra movie rivews
Indira cinema Rayalaseema Chiranjeevi Sonali Delhi
Endra movie Telugu riview
indra.telagu.movs
Indramovie rating
Follow @fullhyderabad
Follow fullhyd.com on
About Hyderabad
The Hyderabad Community
Improve fullhyd.com
More
Our Other Local Guides
Our other sites
© Copyright 1999-2009 LRR Technologies (Hyderabad), Pvt Ltd. All rights reserved. fullhyd, fullhyderabad, Welcome To The Neighbourhood are trademarks of LRR Technologies (Hyderabad) Pvt Ltd. The textual, graphic, audio and audiovisual material in this site is protected by copyright law. You may not copy, distribute, or use this material except as necessary for your personal, non-commercial use. Any trademarks are the properties of their respective owners. More on Hyderabad, India. Jobs in Hyderabad.