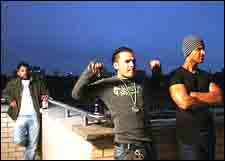 EDITOR RATING
3.0
Performances
Script
Music/Soundtrack
Visuals
NA
NA
NA
NA
Suggestions
Can watch again
NA
Good for kids
NA
Good for dates
NA
Wait for OTT
NA
Watching Goal is kinda like reading Tinkle at age 30. The story-telling is in the same league, and the only way to enjoy it is wanting to enjoy it. And the target audience appears to be the same.

Indeed, the only way to find Goal interesting is not having watched any sports movie in your life - for, this is as elementary and clichéd as they get. It has 'em all - a bunch of below-average sportsmen who have to win a championship to save their club, a reluctant alcoholic coach who has skeletons in his past, lack of money, evil powerful people who do not want them to rise... Only, this flick feels so particularly hackneyed, it's like they put special effort into that.

The once hallowed Southall United football club hasn't won a match in 25 years, and the local city council threatens to sell it off since the lease payments haven't been made for years. The only way out for its bunch of part-time footballers is to win the league championship that will get them the 3 million pounds needed to retain the huge grounds and property.

Shaan (Arshad Warsi), the captain, persuades Tony (Boman Irani), an ex star footballer with a drinking problem and an inexplicable reason to hate Southall though he played for it (when you find out his past, you actually wonder why he hates it at all), to coach them, and the latter gets Sunny (John Abraham), a talented striker who's been rebuffed by Aston, another club, due to his color, to sign up for Southall too despite personal enmity between him and Shaan.

From resounding losses, the team of motley unfit players slowly metamorphoses into a winning unit, and actually reaches the top of the league rankings, and needs one more win to get the championship, when Sunny is lured out to another club by Johnny Bakshi (Tahir Hussain), a representative of the city council that cannot afford to let Southall win. And Southall have to now do it without their main player.

Unfortunately for both the movies, comparisons with Chak De! India are inevitable for Goal, especially since the latter appears to have been made basically to scrape off of the market that the former created. Well, first and most important, Chak De was about the national team, and brandished that formidable weapon - patriotism. Goal features an English football club, a concept hard to understand - the feeble attempts at connecting it to Asia in general don't really rip.

Then, Chak De had strong characterizations and flow - in Goal, you don't understand half the problems of the principal cast. For example, what exactly Sunny's issue with his dad is, and why there is a problem between him and Shaan in the first place. And there are logical gaps, too - like when Shaan refuses to make a pass to Sunny to save a match, though Shaan, the captain, is a balanced person who will do anything to save his club. And like how Sunny sticks to this team of losers even when he is being slighted and actually beaten up by them.

The mediocrity in writing in Goal is omnipresent - the dialogues are from Bollywood's readymade store, comedy is non-existent, and depth is a joke. The senti speech that Shaan gives Sunny about Indian values when the latter signs up for another club, is an example of the complete lack of conviction of even the makers of this one in what they are saying. And Bipasha's role is so particularly dumb, you start wondering if she's like that in real life.

The cake, however, goes to the scene where the man who runs Southall dies in Arshad Warsi's car after uttering a deadpan dialogue about being unable to take it to glory. You can almost see Warsi giving up on coming up with an expression for the situation. Actually, that scene has strategic importance - it reflects the IQ of the entire movie.

In other problems, the film is also set in England and deals with issues faced by British-Indians, which most of us will find tough to connect with - racism, confusion about nationality etc. And the actual football is no fun to watch - these people are actors, not footballers, and it shows.

The actors all seem to realize at various stages that it's a dumb movie, but have no option but to give it what they got. A script like this cannot make any performance stand out. The audiences, however, feel compelled to. You should, too.
Share. Save. Connect.
Tweet
GOAL SNAPSHOT

Guys, get a life.

RATING
2
Kris Ray on 28th Nov 2007, 3:46pm | Permalink
Yeah... you are right Bramhi bro. The Editor should remove such comments as those of Anand's. It is an absolute fact that every one has an opinion and it is all the more true that every one has a right to express it. BTW, the movie is a crap and clich
RATING
2
Y X on 25th Nov 2007, 8:14pm | Permalink
>> Goal features an English football club, a concept hard to understand.

ADVERTISEMENT
This page was tagged for
Goal hindi movie
Goal reviews
release date
John Abraham, Arshad Warsi
theatres list
Follow @fullhyderabad
Follow fullhyd.com on
About Hyderabad
The Hyderabad Community
Improve fullhyd.com
More
Our Other Local Guides
Our other sites
© Copyright 1999-2009 LRR Technologies (Hyderabad), Pvt Ltd. All rights reserved. fullhyd, fullhyderabad, Welcome To The Neighbourhood are trademarks of LRR Technologies (Hyderabad) Pvt Ltd. The textual, graphic, audio and audiovisual material in this site is protected by copyright law. You may not copy, distribute, or use this material except as necessary for your personal, non-commercial use. Any trademarks are the properties of their respective owners. More on Hyderabad, India. Jobs in Hyderabad.