Mithun Verma / fullhyd.com
EDITOR RATING
8.0
Performances
Script
Music/Soundtrack
Visuals
NA
NA
NA
NA
Suggestions
Can watch again
NA
Good for kids
NA
Good for dates
NA
Wait for OTT
NA
He was grim. The man just bustled into the emergency ward on the stretcher was his dear brother. He had remained eerily motionless throughout. But as soon as the doctor appeared, he broke down, "Make him alright doctor. Save him. Please doctor. I love him more than my life. Don't hold back for anything. Money is not a criterion. Please..." The utter despair of the man moved even the hardened doctor who assured he'd give it his all.

During the entire commotion of the scurrying doctors in and out of the ward, the man had bought the expensive drugs and paid for the admission. The man didn't flinch; he would give anything for his brother. When the doctor came out this time, he hesitated, then removed his glasses slowly and declared that they couldn't save his brother. The man grimaced and, to the doctor's shock, the grimace turned into an impish smile. Keeping the smile intact, he produced a piece of paper. It was a certificate, a death certificate.

The man he called his brother had died before he was brought to this disgracefully corrupt hospital.

That just has to be the best scene to have hit the screens this year.

Actually, this just has to be the best movie to have hit the screens this year.

Tagore (easily the best hero in this galaxy, Chiru) is the mastermind behind the undercover, banned Anti-Corruption Force. It's banned for it abducts 15 of the most corrupt officials from each department and kills the top criminal. This is done to spread terror among the rest of them. If you know you would be killed if you come first in the race, wouldn't you run slowly? And wouldn't the other contenders try to run even slower? Yup, sometimes filmmakers do show that they got brains. Occasionally they go a step further and show they can even use them. But at times they show that they can use them well. Tagore remains gripping throughout, proving that point. 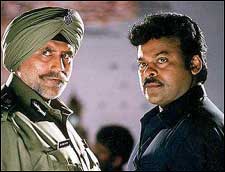 Professionally, Tagore works in a college. It is from here that he builds the network of ACF, sending one of his students into all the government offices as recruits. They maintain records of all the dishonest officeholders, their properties, and the proofs of these. The whiplash of the ACF hence is absolved by the general populace.

With the growing adulation of the ACF, the police increasingly fail to curb it. Prakash Raj, as a devout man of the force, investigates the case with astute deftness and finally helps to blow the cover off the network. Tagore surrenders, but is provided full amnesty in the end. 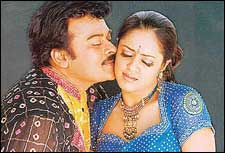 Shreya, Sunil and a bunch of cute kids render Tagore's personal life to be lovable as well, while Jyothika in a cameo brings out the best in Chiru. Her death is the reason behind Tagore's transformation.

That's for the story. Now, for a fact and reality routine:

Fact: Chiru's performance should make all the other heroes give up acting completely. 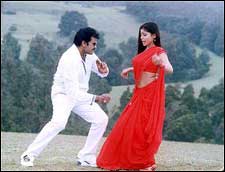 Fact: Lawrence perhaps has given us everything that he has. Some of the dance steps look repetitive.

Reality: Chiru can keep the audience captivated with his charm and grace forever, even if it's just by moving his little finger.

Fact: Mani Sharma has given 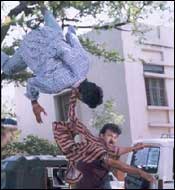 Fact: The fight sequences in the movie are not too real and are unbelievable.

Reality: They're unbelievable, all right. Not to mention incredible, astounding and mind-boggling.

Fact: This is Mr. Vinayak's 3rd movie itself.

Reality: With so much talent, it certainly won't be his last.

Fact: If the movie's so good, why not give it 5 stars? Reality: There a few obvious landmines: The timing of the songs is awful. Then, the setup of the ruins during Jyothika's death scene is out-and-out ridiculous. The lip-syncing for the special officer from Delhi and the make-up in general are not up to the mark.

Fact: But on any given day, Tagore is definitely a commercial masterpiece.

Reality: True. On any given night as well!

Tagore is an outstanding example of the appeal a well-made commercial movie can have. Don't miss it. Reality: There a few obvious landmines: The timing of the songs is awful. Then, the setup of the ruins during Jyothika's death scene is out-and-out ridiculous. The lip-syncing for the special officer from Delhi and the make-up in general are not up to the mark.

Fact: But on any given day, Tagore is definitely a commercial masterpiece.

Reality: True. On any given night as well!

Tagore is an outstanding example of the appeal a well-made commercial movie can have. Don't miss it.
Share. Save. Connect.
Tweet
TAGORE SNAPSHOT
See Tagore full details
TAGORE USER REVIEWS
1 - 13 OF 13 COMMENTS
POSITIVE  |  NEGATIVE |  NEWEST  |  OLDEST  |  MOST HELPFUL  |  LEAST HELPFUL
USER RATING
7.8
487 USERS
Performances
Script
Music/Soundtrack
Visuals
NA
NA
NA
NA
Can watch again - NA
Good for kids - NA
Good for dates - NA
Wait for OTT - NA
Maheboob Basha on 1st May 2006, 8:01pm | Permalink
megastar chiranjeevi
RATING
2
Naveen Chowdhry on 28th Mar 2006, 12:30pm | Permalink
it gives lesson for civel workers ....and politecian ....
RATING
10
Praneeth on 21st Nov 2005, 5:20pm | Permalink
i see priyanka pulla has been deliberately kept out of this, or she opted out herself; this review is terribly biased---out of extreme preferment or fear of going against a movie giant(chiru)
RATING
2
Prasad P on 6th May 2004, 9:50am | Permalink
Its a Heart touching with real incidents in the world..
RATING
10
Chaitanya Psr on 2nd May 2004, 11:23pm | Permalink
it has nothing new to offer. even the background score sounds similar to the one in bharateeyudu.the fights are ridiculously ludicrous(the cartoons would feel a complex).shriya has absolutely no role to play in the movie.same old story, same old dialogues,the only standing point of the movie has to be the superb dance & acting performance from chiru(but u know that is expected of him)
RATING
4
Movie Buff on 21st Oct 2003, 2:50pm | Permalink
It is a masala movie with a heavy social message shoved down my throat. Fights are ridiculously long. Placement of songs in the movie is not good. Shriya looked like Chiru's daughter in this movie.
RATING
6
Jaszalcatraz on 20th Oct 2003, 6:50pm | Permalink
I agree with Crackednut Nutty. CHIRU RULEZ baaaaaabbbbaaaaaiiiii!
RATING
10
Crackednut Nutty on 2nd Oct 2003, 1:16am | Permalink
Chiru Rules, Maaaaaavvvvvmmmmaaaaaaa!!!
RATING
8
Durga Lalita on 1st Oct 2003, 9:34am | Permalink
Movie is very good. Music is good. Fights are not so good. Overall, Chiru is good, sorry, excellent.
RATING
8
Cynic on 1st Oct 2003, 12:34am | Permalink
Any person with even an elementary knowledge of cinema will be a fan of Chiranjeevi. He/she just HAS to be. He's not only a brilliant actor but an even better dancer - a combination that only a few have. I can only think of one other - Kamal Hassan. Nobody else in the history of Indian cinema comes close. This movie proves my point.
RATING
10
Mungalla Krishna on 29th Sep 2003, 6:31pm | Permalink
It's really a good movie. No one can break his records. He himself is the creator and breaker of all records.
RATING
10
Gopi on 29th Sep 2003, 1:39pm | Permalink
The reviewer seems more like a fan of Chiranjeevi and less like a reviewer. Give credit to the Tamil version of the movie which was far superior and more realistic than the adaptation.
RATING
2
Chiru Bhavansikar on 29th Sep 2003, 6:35am | Permalink
Hats off!
RATING
8
LEAVE A COMMENT
fullhyd.com has 700,000+ monthly visits. Tell Hyderabad what you feel about Tagore!
MORE MOVIES
Latest Reviews
Hunt
Pathaan (Hindi)
Waltair Veerayya
Veera Simha Reddy
Top Gear
more
18 Pages
Dhamaka
Connect (Telugu)
Avatar: The Way of Water
Panchathantram
Gurtundha Seetakalam
Violent Night
Matti Kusthi
HIT: The 2nd Case
Love Today
Contemporary Reviews
Munna
Satyam
Dus Kahaniyaan
The Golden Compass
Desamuduru
more
Showbiz
Viyyalavari Kayyalu
Pourudu
I Am Legend
Khoya Khoya Chand
Gadar
Goal
Indra
Yamadonga
Random Reviews
Rani Mera Naam
Risk
Two Weeks Notice
Aadi
Asoka
more
Team - The Force
Kothi Mooka
Final Destination 5 (3D)
The Expendables 2 (Telugu)
Anthaku Mundhu Aa Tharuvatha
Maine Pyar Kiya (Telugu)
Terminator Genisys
Raees
Bhavesh Joshi Superhero
Thambi (Tamil)
SEARCH MOVIES
Dissatisfied with the results? Report a problem or error, or add a listing.
ADVERTISEMENT
SHOUTBOX!
{{todo.name}}
{{todo.date}}
[
ip{{todo.ip}}
]
{{ todo.summary }}... expand »
{{ todo.text }} « collapse
First  |  Prev  |   1   2  3  {{current_page-1}}  {{current_page}}  {{current_page+1}}  {{last_page-2}}  {{last_page-1}}  {{last_page}}   |  Next  |  Last
{{todos[0].name}}

ADVERTISEMENT
This page was tagged for
tagore telugu full movie hd download
tagor telugu full movie download in movierulz
tagore full move in movierulz
Tagore Chiranjeevi Telugu cinema
tagore full movie
Follow @fullhyderabad
Follow fullhyd.com on
About Hyderabad
The Hyderabad Community
Improve fullhyd.com
More
Our Other Local Guides
Our other sites
© Copyright 1999-2009 LRR Technologies (Hyderabad), Pvt Ltd. All rights reserved. fullhyd, fullhyderabad, Welcome To The Neighbourhood are trademarks of LRR Technologies (Hyderabad) Pvt Ltd. The textual, graphic, audio and audiovisual material in this site is protected by copyright law. You may not copy, distribute, or use this material except as necessary for your personal, non-commercial use. Any trademarks are the properties of their respective owners. More on Hyderabad, India. Jobs in Hyderabad.