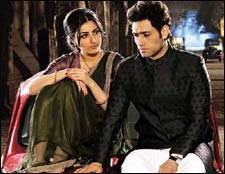 Samrat Sharma / fullhyd.com
EDITOR RATING
6.0
Performances
Script
Music/Soundtrack
Visuals
NA
NA
NA
NA
Suggestions
Can watch again
NA
Good for kids
NA
Good for dates
NA
Wait for OTT
NA
I'm conflicted. On one hand, I absolutely adore Khoya Khoya Chand, a glossy celebration of the cinema in the '50s and '60s, arguably the Silver Age of Hindi films. When the industry was just a few people knowing each other trying to do something, and where they had an identity far removed from the pathetically coined Bollywood.

On the other hand, the film has a few problems hard to overlook. Like I said, I'm conflicted.

As a staged sober jubilation of the times, Khoya Khoya Chand is absolute crackerjack in the first half, dotted with characters serving as stand-ins for the plethora of colorful figures that filmdom had then. This is unapologetically reverent filmmaking, paying homage to the divas and the stars and the energy of the times in a narrative straight out of a complex India novel.

It begins with the Vinay Pathak's assistant director Shaymol narrating the story of a young girl with stars in her eyes, a young girl trying to make it big, accepting whatever fate throws her way by way of hurdles, including lecherous actors. The first time she meets a fiery young poet, a man with a past troubled beyond any, there is instant recognition of the passion and pain. The story, as he narrates it, is about Nikhat (Soha Ali Khan) and Zaffar (Shiney Ahuja).

The reigning superstar, with the gladdest eye you ever saw, Prem Kumar (Rajat Kapoor) is a man slightly unnerved by his current standings as a star, a little discontent and a little suffering from mid-life crisis. Enter our duo. Nikhat he promises to make a star, and casts opposite himself in productions, and he tells Zaffar that he should be writing films now, specifically for him.

But when the hurt and pain from their pasts come out, the girl and the boy connect, and begin an affair clandestinely. When Zaffar can't stand it anymore, he becomes reckless, and then starts his own film. When Nikhat can't commit to his film due to date problems, he resents her till the completion of his film, which bombs inevitably, increasing the resentment.

This, by the way, is just some time into the film, and I haven't even touched on the beautifully written producer Khosla (Saurabh Shukla) and the effervescent Ratan Bala (Soniya Jehan), the diva of the times. As is Mishra's style, he crams his film with narrative making sure that the movie moves along at a good pace, and feels like an interesting book being read.

What mars the brilliantly staged film is the incompatibility that Mishra introduces unknowingly in his handling. The Vinay Pathak narrative is shunned halfway, and he transcends from being a mute spectator to the film to being an active character. Almost as if Mishra wanted layers to everything his film had. Zaffar, the main character, increasingly becomes hard to like or empathize with.

Shiney Ahuja keeps the character a crying man-child, and a perpetually sad o simmering buffoon who can't help but be a part of the mistakes that keep happening. This, when Soha Ali Khan delivers the performance that anchors the film throughout. She is the life of the film, and in front of her, Shiney's efforts are a bit one note. The supporting cast, including the subtle portrayal by Rajat Kapoor, and the utterly screen-dominating and radiant performance by Soniya Jehan, is spot on, however.

Technically it is hard to find fault with Khoya Khoya Chand. Everything about that era is delivered perfectly, and with love to spare. The writing, though, is inconsistent. In yet another dominating performance, Saurabh Shukla gets dialog that feels contemporary and retro at the same time, sucking us into that world every time he comes on screen. On the other hand, almost every time Zaffar or Nikhat open their mouths, they speak in heavy-handed dialogs reminiscent more of the films they were in, than the actual people they wished to portray.

I really wanted this film to work, but the insipid and most tepid third half was something I could not overlook at all. It is criminal the way Mishra chooses to end the film in a limp fashion, drifting away like a whiff of smoke, especially when the first half of the film is the most entertaining 1 hour plus I have spent in a cinema hall in recent times. But then again I had that issue of Om Shanti Om too, another celebration of filmmaking of an era.

My conflict hasn't resolved itself, a few hours after having seen the film, but I can tell you this much: you won't find a more sincere and rigorously narrated film this year as far as the first half is concerned. But if the second half leaves you cold, don't blame your fatigue of the soft-focused lenses. It's just Mishra's Khoya Khoya Script.
Share. Save. Connect.
Tweet
KHOYA KHOYA CHAND SNAPSHOT

ADVERTISEMENT
This page was tagged for
Khoya Khoya Chand hindi movie
Khoya Khoya Chand reviews
release date
Shiney Ahuja, Soha Ali Khan
theatres list
Follow @fullhyderabad
Follow fullhyd.com on
About Hyderabad
The Hyderabad Community
Improve fullhyd.com
More
Our Other Local Guides
Our other sites
© Copyright 1999-2009 LRR Technologies (Hyderabad), Pvt Ltd. All rights reserved. fullhyd, fullhyderabad, Welcome To The Neighbourhood are trademarks of LRR Technologies (Hyderabad) Pvt Ltd. The textual, graphic, audio and audiovisual material in this site is protected by copyright law. You may not copy, distribute, or use this material except as necessary for your personal, non-commercial use. Any trademarks are the properties of their respective owners. More on Hyderabad, India. Jobs in Hyderabad.