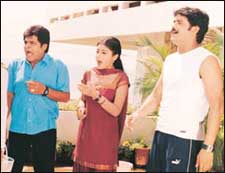 Mithun Verma / fullhyd.com
EDITOR RATING
5.0
Performances
Script
Music/Soundtrack
Visuals
NA
NA
NA
NA
Suggestions
Can watch again
NA
Good for kids
NA
Good for dates
NA
Wait for OTT
NA
Don't go for the rating straightaway. Without a doubt, Nenunnanu will be the biggest blockbuster of the year. Um, after Varsham, Malliswari, Satyam, Venky, Lakshmi Narasimha, Anji, Missamma... So maybe this might not be the biggest blockbuster after all. But that doesn't mean we'll nitpick irritatingly and keep complaining about all the negatives. We'll unequivocally complain about the positives as well! So let's get going.

Venu (Nag) is a guy who has come up in life the hard way. He always takes the staircase instead of the elevator to success. That's mostly because it is difficult to make an elevator out of a gang of brainless thugs. However, you can make a staircase out of them by proficiently beating them to a pulp and using their body parts as stepping-stones. Venu shows an example of this craftsmanship quite frequently.

But craftsmanship, elevators and staircases never made for a good plot (unless you're Raghavendra Rao who'd then quickly add a bunch of grapes and call it Gango-three). So we have a cylinder (Aarti Agarwal) added to fire up the proceedings.

Now don't get us wrong - even if we do not like certain individuals and things too, we would never call them such names. In the movie, Nag himself calls Aarti a gas cylinder! It's a pity how the mighty have fallen to the level of being made fun of in the movies. Cylinders definitely need better treatment than that.

Anyway, then enters the real heroine, Anu (Shriya). Anu is a violinist-cum-vocalist who plans to elope with her boyfriend. But her plans are cut short when Venu accidentally hands her boyfriend over to his dad (the boyfriend's dad, not Venu's). Anu is now stranded - her family has disowned her and her boyfriend has abandoned her.

Venu cannot just let a young, vulnerable, helpless girl be stranded on a railway station. So he takes Anu to his home where she can be young, vulnerable and helpless all she wants. He keeps her at his place while trying to get her together with her boyfriend. But this boyfriend dude turns out to be the villain's son. So Venu again has to hit his way through a meager 500 men to get that boyfriend.

All for no use, because that boyfriend shows everybody just why he is the villain's son - his expressions have absolutely nothing to do with his dialogue delivery! Also, he leaves Anu saying that she's having an affair with Venu. He might have been the villain's son, but he's not stupid. The way Venu and Shriya were singing and dancing in foreign locations, even we thought they were having an affair.

But Venu and Shriya show how grossly mistaken all of us are. They never ever had an affair - how can we even think about them in that way? They only plan to have an affair, because they realise that they love each other. So Venu, even after being loved by a cylinder, and Anu, even after getting married to her old boyfriend, end up together because Nenunnanu. (Nenu = not "me". Nenu = script)

It's a good thing that the movie's called Nenunnanu because that's the only way the script can assert its presence. Why was there a scene about kids in the beginning? Nenunnanu. Why is Aarti Agarwal in the film? Nenunnanu. What is the need for so much violence? Nenunnanu...

The only moment when the script and the director can proactively claim their presence is during the blooming period of the pure love between Nag and Shriya in the second half. And in a few comedy scenes. Keeravani's music is also a plus.

Nenunnanu is completely a commercial venture - violence and songs for the masses; sentiment and emotion for the ladies (Shriya's falling out and making up with her family); romance for the youth; comedy for the kids; The only element missing is a magic wand to make all of the above look jointed rather than disjointed.

No doubt, Nag looks and acts to kill in the movie, but I'm not sure if that itself is worth standing in the hot sun, sweating like a mating rhinoceros, to get the tickets and watch this.
Share. Save. Connect.
Tweet
NENUNNANU SNAPSHOT

Sorry sir ur review is full of nonsense. According to me this movie is better than the movies which u mentioned.

ADVERTISEMENT
This page was tagged for
nenunnanu telugu movies
Nenunnanu telugu movie
Nenunnanu reviews
release date
Nagarjuna, Shriya
Follow @fullhyderabad
Follow fullhyd.com on
About Hyderabad
The Hyderabad Community
Improve fullhyd.com
More
Our Other Local Guides
Our other sites
© Copyright 1999-2009 LRR Technologies (Hyderabad), Pvt Ltd. All rights reserved. fullhyd, fullhyderabad, Welcome To The Neighbourhood are trademarks of LRR Technologies (Hyderabad) Pvt Ltd. The textual, graphic, audio and audiovisual material in this site is protected by copyright law. You may not copy, distribute, or use this material except as necessary for your personal, non-commercial use. Any trademarks are the properties of their respective owners. More on Hyderabad, India. Jobs in Hyderabad.