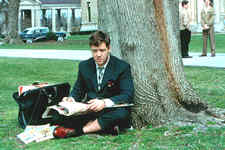 Usha Revelli / fullhyd.com
EDITOR RATING
8.0
Performances
Script
Music/Soundtrack
Visuals
NA
NA
NA
NA
Suggestions
Can watch again
NA
Good for kids
NA
Good for dates
NA
Wait to rent it
NA
The mind is such a merciless dictator. It gives you choices, and just as you reach out, withdraws them within the blink of an eye. It mars you as quickly and thoroughly as it makes you, and ultimately subjugates you to a slave - a slave to itself and its sporting whims and fancies.

It can only be a genius, a prodigy with an astute understanding of the mind and its mechanics, who can rise above his mind. Or climb over the horse and take the reins firmly into hand, as Freud would have described it. This transition from a slave to the master is not a painless one. It is a grueling and exhausting journey - vanquishing an inertial spirit and burning down its defenses, and dousing a deathly fatigue with the zeal for life.

But when the man rises from these almost-ashes, what would he be like? Like Russell Crowe. Or John Forbes Nash Jr - a man who proves matter can triumph over the mind, that a beautiful mind can be restored to its complete glory.

Based on the biographical work of Sylvia Nasar on Nobel winner John Nash and winner of four Academy Awards, A Beautiful Mind is for all those who would have wondered about the human mind at one time or the other, in one form or other.

A mathematician whose genius smolders within himself and occasionally expresses itself in equations scribbled on windowpanes and mirrors, is brought down to his knees by paranoid schizophrenia. The illness and its consequent treatment leave him numbed, helpless, incapacitated... but not defeated. A moment comes when he decides enough is enough, and slowly stretches his fingers out and explores his dormant strengths and reaches out - to touch the stars.

The Gladiator excels himself in this analytical masterpiece. Crowe looks as though he has almost internalized the mannerisms, the twitches and the quirks of the real Nash, and his superlative performance makes you hold your breath and then traverse through the mental maze. Jennifer Connelly is pretty, and beautifully underplays the supportive wife. Ed Harris is his usual stoic self.

The film is a study on the vagaries of the mind, and probably helps those who face paranoid schizophrenia in real life understand the delusions, the mood swings, and the feeling of captivity within their minds and its magnitude, and cope better. And see the beauty of the mind.
Share. Save. Connect.
Tweet
A BEAUTIFUL MIND SNAPSHOT

ADVERTISEMENT
This page was tagged for
A Beautiful Mind english movie
A Beautiful Mind reviews
release date
Russell Crowe, Jennifer Connelly
theatres list
Follow @fullhyderabad
Follow fullhyd.com on
About Hyderabad
The Hyderabad Community
Improve fullhyd.com
More
Our Other Local Guides
Our other sites
© Copyright 1999-2009 LRR Technologies (Hyderabad), Pvt Ltd. All rights reserved. fullhyd, fullhyderabad, Welcome To The Neighbourhood are trademarks of LRR Technologies (Hyderabad) Pvt Ltd. The textual, graphic, audio and audiovisual material in this site is protected by copyright law. You may not copy, distribute, or use this material except as necessary for your personal, non-commercial use. Any trademarks are the properties of their respective owners. More on Hyderabad, India. Jobs in Hyderabad.