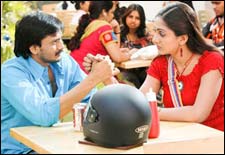 The good news is really not worth it, so let's skip it. The bad news is that Puri Jagannath has stated that he will keep on producing films starring his brother. Yes, it's his money and he can do exactly what he wants with it, but somehow it seems cruel.

And in the case of this film, if the acting doesn't kill you, the rest of the movie will.

Indeed, Hello Premisthara is not a lousy movie merely because of its histrionically impaired lead star. It is a failure right at the drawing board. The basic feature of a well-written script is that the viewer should like what is happening on screen for the most part of the film, and should look forward to what will happen next. For about 80% of the time that Hello Premisthara is running, however, it's all bad news.

First, a misunderstanding in love slowly unfolds as you helplessly watch on, and then, a merciless and smart villian carefully plots and eliminates an unsuspecting hero to land the latter's girl. It's a known fact that most (non-comedy) movie stories show the main characters getting into trouble first and then getting out of it, and it is how you showcase the former part that makes a difference. People go to movies for entertainment and not to be kept depressed, and scripts have to deliver on that.

Aravind (Shankar), a telecom company executive, and Nandini (Sheela), a TV show anchor, fall in love. It's hard to forgive this given how sad Aravind's dialogue delivery is, but when you find out the actual plot - that there is a lookalike of Aravind, Arjun, who Nandini keeps running into coincidentally and makes lovey-dovey talk thinking he's Aravind, getting him to fall in love with her too - you truly lose interest in the film. You went to watch what you thought would be a soft and light-hearted romance - not a love triangle, which always means tragedy.

Arjun is a violent psychopath, and when he realizes that Nandini is in love with Aravind and not him, he decides to kill Aravind and become Aravind himself. He almost succeeds.

For a thriller, the script has too many loopholes to be taken seriously - nothing rings credible, from the courtship of Aravind and Nandini to the tale of the hunter and the hunted. Sairam Shankar should get someone to dub for him, attend acting classes wherever and whenever they are held, and pray regularly. Sheela does a good job as a sprightly and much-in-love girl, and the film is pushed back from the brink also by the comedians. The song Ninna Monna is good both on melody and on picturization, and caps a reasonably good musical score.

If you want to really watch this one, remember to inform your folks at home where you can be found.
Share. Save. Connect.
Tweet
HELLO PREMISTHARA SNAPSHOT

ADVERTISEMENT
This page was tagged for
hello premistara old movie
Hello Premisthara telugu movie
Hello Premisthara reviews
release date
Sairam Shankar, Sheela
Follow @fullhyderabad
Follow fullhyd.com on
About Hyderabad
The Hyderabad Community
Improve fullhyd.com
More
Our Other Local Guides
Our other sites
© Copyright 1999-2009 LRR Technologies (Hyderabad), Pvt Ltd. All rights reserved. fullhyd, fullhyderabad, Welcome To The Neighbourhood are trademarks of LRR Technologies (Hyderabad) Pvt Ltd. The textual, graphic, audio and audiovisual material in this site is protected by copyright law. You may not copy, distribute, or use this material except as necessary for your personal, non-commercial use. Any trademarks are the properties of their respective owners. More on Hyderabad, India. Jobs in Hyderabad.