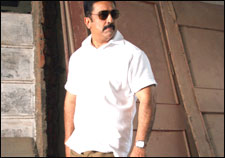 EDITOR RATING
6.0
Performances
Script
Music/Soundtrack
Visuals
NA
NA
NA
NA
Suggestions
Can watch again
NA
Good for kids
NA
Good for dates
NA
Wait to rent it
NA
There are times in life when you have to let your biases out into the open, and face life like a man. So here goes - this reviewer is a big fan of Venkatesh, and counts Gharshana amongst his favorite Telugu films.

With that out of the way, let's get to the crux. Raghavan should really have had Venkatesh in it. Or at least someone close. Which essentially means Venkatesh.

With no disrespect to a man popularly considered a legendary actor, Kamal Hasan is perhaps not the man for the role of Raghavan. He brings no energy and no animation to the role of a high-performing, go-getting police inspector, choosing instead to be his usual subtle, understated portrayer.

Indeed, the big liability to another movie that would have been in the same league as Gharshana (okay, so Gharshana was no monster hit, but should have been), is its lead character. Kamal Hasan seems to have one uniform expression all through the film, and when he says "We'll get him," you are not really dying to pump your fist into the air and line yourself up behind him, jaws clenched.

Okay, even if you are, it's mostly because of the movie itself.

Raghavan is a good movie. The man who made Gharshana churns out another episode in the life of a police officer, and, even without counting the fact that his last attempt had you scrounging for more, once again has you riveted with the cinematic equivalent of a late night in solitude with a page-turner.

When the college-going daughter of Anandraj (Prakash Raj), the DCP of Vizag, is kidnapped and her thumb found hanging to his door, he calls in old protégé and DCP Crime Hyderabad, Raghavan (Kamal Hasan), a feared officer famous for his ability to smell clues. He quickly finds out what's happened to the girl - she's been brutally raped and buried somewhere on the outskirts. However, the case reaches a dead-end there.

6 months later, Anandraj and his still-distraught wife sell everything they have and move to the US to get over the trauma. In a few days, Raghavan receives a call that they have been brutally murdered there. Raghavan's equation with Anandraj far transcends the professional boundary, and he travels to the US for vendetta. And what he unearths - literally - is chilling.

Raghavan is a movie marked by a gripping screenplay, slick editing, stirring background score and compelling cinematography. Did we mention gripping screenplay? There are few boring moments, and even the romance - Raghavan runs into Aradhana (Jyothika) in New York - feels rather out-of-place. Which is saying something, since Gautam is a master of romance too - arguably the best part of Gharshana, essentially an action-thriller, was the romance between Venkatesh and Asin.

However, the film takes an unexpected tack, and perhaps suffers because of that, when the killers are revealed right in the first half. It ceases to be a suspense thriller then and becomes a tale of the hunter and the hunted. The psychopathic villians however are all vim and brimstone, and you will probably find yourself trying to put yourself in their minds, just to figure out their makeup.

Indeed, characterization is a strong part of the film - all silhouttes morph quickly into flesh-and-blood, and with high definition. Except, again, that of Raghavan. Perhaps it is that Raghavan works alone. Perhaps it is that he plays more of a self-assured detective than a leader. Perhaps it is that Kamal Hasan is not best suited to action roles that require more animation than understatement.

The music by Harris Jairaj is not as likely to set the charts on fire as you'd expect. Plus, this is a dubbed film (it was Vettaiyadu Vilaiyadu in Tamil), and that has its own compromises.

Jyothika is quite expressive in a brief role, as is Kamalinee Mukherjee. Salim Baig and especially Daniel Balaji as the psychopaths are extremely evocative. Kamal Hasan can evoke mixed responses - you can call it either an exceptionally controlled performance, or miscasting. Prakash Raj evokes sympathy and predictably excels in a brief role.

Raghavan is certainly worth a watch if you can stand some gore and some sorry lip-sync, and is perhaps the best movie in Telugu at this time as we write this.
Share. Save. Connect.
Tweet
RAGHAVAN SNAPSHOT

You points are well-taken. If you wish to write reviews for fullhyd.com, please contact us at knkk at fullhyd.com

RATING
6
Chandra Sekhar on 20th Sep 2007, 1:32pm | Permalink
The review and the film - both are equally bad. The reviewer is right in noting that Kamal Hasan did not bring the energy needed for the role. There is no confusion about it. You don't go in and do a go getter cop's role in a supposedly action movie with understatement.
The way Raghavan chases or fights the goons makes you think he's suffering from hangover.
The screenplay that the reviewer praises is full of holes. The film chronicles four deaths in the first forty minutes without going an inch into solving the mystery. The situation of Rahgavan going to the US and partnering with the detective had immense potential, with our man bringing the pragmatism and earthy wisdom of the east to match the researched analytic thinking of the west. Remember inspector Khote anyone? All that is wasted with the jejune device called the 'Raghavan instinct'. The reviewer rightly points out that when the killers are revealed in the first half, the movie ceases to be a mystery. But the chinky screenplay leaves a lot as mystery - what is the motive of the killers? What great experiment are they conducting? What is the relevance of the homosexual angle? Raghavan speaks into his recorder about the mismatch in modus operandi of different killings, but the movie doesn't explain this at all.
The romantic angle with Jyothika that the reviewer feels is a drag - is the only high point of the movie. It is beautifully understated. However, Kamalini Mukherjee is wasted. FullHyd needs to do a better job than to misguide viewers who depend on reviews.

RATING
4
Raju Sesh on 10th Sep 2007, 9:13am | Permalink
Well, not many(like this reviewer) will have the same opinion on the hero. Kamal Hassan has revelled in this role of DCP Raghavan! Mr. Reviewer FYI: Kamal has done more 'Animated','high-performing' roles than any other lead actor. He has given a restrainied performance only because his character demands it. We dont need another loud mouthed police officer. We have seen enough. So this movie is certainly a welcome change for Telugu audience. A perfect Action Adventure!!!
RATING
10
Soumi K on 8th Sep 2007, 8:07am | Permalink
loved the romance but the director could have cut short those rape scenes.
RATING
8
Subha S on 8th Sep 2007, 6:47am | Permalink
cutting finger, fag-bullsiht and it sucks big time
RATING
2
Vipin on 7th Sep 2007, 8:08pm | Permalink
Kamalhaasan is one of the few actors in india who could do justice to any role. Comparing him with venky is totally crap. The reviewer should be sensible. If he thinks that venky has delivered a awesome performance in garshana, then he should see the tamil version of the same before saying so...I thought kamal's performance in this movie is awesome and he has already got the state government's award for the same..
RATING
8
Srihari on 7th Sep 2007, 4:47pm | Permalink
Come on guys get your act together this is film that is at least worth 4 stars if not 5stars.

Comparing Kamal Hassan to Venkatesh and infering Venky would have been better in this role is like a crime
that is worth a capital punishment.

Anyway folks ignore the reviewer just go ahead and watch this masterpiece and better if possible watch the orginal.

ADVERTISEMENT
This page was tagged for
raghavan telugu movie review 123telugu
raghavan telugu review
ragavan telugu movie review
raghavan kamal hassan movie
Raghavan telugu movie
Follow @fullhyderabad
Follow fullhyd.com on
About Hyderabad
The Hyderabad Community
Improve fullhyd.com
More
Our Other Local Guides
Our other sites
© Copyright 1999-2009 LRR Technologies (Hyderabad), Pvt Ltd. All rights reserved. fullhyd, fullhyderabad, Welcome To The Neighbourhood are trademarks of LRR Technologies (Hyderabad) Pvt Ltd. The textual, graphic, audio and audiovisual material in this site is protected by copyright law. You may not copy, distribute, or use this material except as necessary for your personal, non-commercial use. Any trademarks are the properties of their respective owners. More on Hyderabad, India. Jobs in Hyderabad.