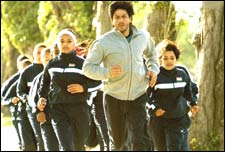 Devyani Srivastava / fullhyd.com
EDITOR RATING
7.5
Performances
Script
Music/Soundtrack
Visuals
NA
NA
NA
NA
Suggestions
Can watch again
NA
Good for kids
NA
Good for dates
NA
Wait to rent it
NA
The story of Chak De India is fairly simple. Kabir Khan (SRK) is the talented captain of India's national hockey team. By a stroke of bad luck, he makes a mistake in the climatic moment of a match against Pakistan, causing the Indian team to lose. Strong rumors circulate – did he throw away the match? Unable to defend himself against a public character assassination, Kabir loses it all – the faith of his people, his captaincy, and most sorrowfully, his dignity.

What Kabir does not lose is his confidence. His spirit remains unbroken. He disappears from public light, only to re-emerge 7 years later, asking for a job that no one else wants: Kabir wants to coach India's national hockey team ...for women. He wants to do so with the team on the threshold of vying for the World Cup.

After enduring a humiliating interview with government officials, Kabir secures the position. There on begins his journey towards vindication. And, like all such journeys, it is not one without obstacles.

The hockey team is, predictably, a disaster. While the players themselves do not lack forte, they lack team spirit and unity, and the grit and determination that is so essential in a race for a world championship. One quality does unite them, however: they are all fighters. Kabir realizes this, and by being unconventional and thoroughly demanding, he uses it as a weapon to help them win the World Cup, while he walks away redeemed.

For all its straightforwardness, Chak De India is an unconventional Bollywood movie. For starters, it has an unusual theme: hockey (and there is tons of it), that too played by women. In Bollywood, movies based on sports are few and far between, though there have been some very memorable ones, such as Jo Jeeta Wohi Sikander, Lagaan, and the more recent Iqbal.

However, Jo Jeeta Wohi Sikander and Lagaan were also powerful love stories at their cores. And both movies also incorporated many song-and-dance sequences in their narration. Chak De India offers neither. The movie's soundtrack does contain pleasant, upbeat songs, but they flow in the background, acting as catalysts by spiking the movie's tempo and the audience's emotions at regular intervals.

Like Iqbal, Chak De India attempts to keep it real. The story, though it succumbs to cliché now and then, is told convincingly. In this cricket-obsessed nation (Chak De India tackles the issue of cricket versus hockey too, through an interesting sub-plot), plenty of players are placed on, and toppled off, pedestals overnight; Kabir's rabid persecution thus strikes a chord.

There are plenty of other touches that director Shimit Amin gives to Chak De India that add to its realism. For example, he highlights the apathy, the casual attitude, of bureaucrats towards the plight of Indian women in sports. He also employs humor to good effect while telling his tale, especially in one scene where the girls ogle over a celebrity sportsman.

Further, Chak De India's theme of resistance, and rebellion, rings true, and the same has been said of Iqbal. Like Kukunoor's mute protagonist, these sportswomen are also handicapped, albeit metaphorically. They find no takers for their efforts. You empathize with them as they struggle against families, fiances, uncooperative governments and a chauvinistic society at large to play and get ahead. You can't help but identify with these figures of female empowerment – at some point, their fight becomes your fight, which is a compliment to Amin's directorial skill.

That these actors actually look like sportswomen helps – the casting is superb. Many of them are debutantes, and they have been chosen from all over India. Their diversity is necessary, and has been underlined through their appearances, even as they are all starkly de-glamorized.

Each of these new actors in Chak De India is convincing individually, but their greatest strength is the same in real life and reel life – they play as a team, and they play under the guidance of an actor as experienced as Shah Rukh Khan.

Chak De India, like Iqbal again, is also a celebration of the underdog. Here, it is not only the entire team but also the coach symbolising this never-say-die attitude. They all overcome the odds stacked up against them, and emerge stronger and victorious.

Chak De India is quite heavy on patriotism; Yash Raj has timed it release well, just prior to Independence Day. Watch it for its nationalism. Or SRK. Or hockey. Just watch it.
Share. Save. Connect.
Tweet
CHAK DE INDIA SNAPSHOT

See Chak De India full details
CHAK DE INDIA USER REVIEWS
1 - 15 OF 21 COMMENTS  |  NEXT  |  LAST
POSITIVE  |  NEGATIVE |  NEWEST  |  OLDEST  |  MOST HELPFUL  |  LEAST HELPFUL
USER RATING
8.4
199 USERS
Performances
Script
Music/Soundtrack
Visuals
NA
NA
NA
NA
Can watch again - NA
Good for kids - NA
Good for dates - NA
Wait to rent it - NA
Pcj on 22nd Nov 2019, 5:22pm | Permalink
Chak de India best sport film till date
raju..... on 19th Dec 2015, 9:40pm | Permalink
222223
raju on 19th Dec 2015, 9:39pm | Permalink
2222222
raju on 19th Dec 2015, 9:37pm | Permalink
superrrrrrrrrrrrrrrrrrrrrrr
Rocky on 23rd Jun 2012, 10:51am | Permalink
Chakde India is an inspirational movie for the young talented sportsmen which gives a strong message of Never Backing up in any situation of life and working hard to achieve the desired goals.
Chakde is a movie based on the life of the talented Indian Hockey Team Captain Kabeer Khan(SRK) who misses the great opportunity to win the world cup of hockey against the big rivals Pakistan and looses the trust and dignity of his own team and nation but his strong virtue of not giving up at any cost brings him back to the hockey this time as a coach of the Indian Women Hockey team gaining him back his dignity and pride by making the women team to win the world cup final.

RATING
10
Amara Sharma on 23rd Jan 2012, 2:40am | Permalink
Chak De is a great movie and even surprised to know that it has cracked my mains exam for UPSC as well. I had joined Climb First for UPSC preparation and I met Mr. Mukund there who has cleared his examination. He advised me to prepare strategy plan as per Chak De movie. At Climb first, Mukund advised me that to crack upsc mains, 11 things are very important, same like 11 members in a team.
1. General Studies – Prelim,
2. GA – Prelim,
3. English – Mains (Qualifying),
4. Indian Language – Mains,
5. Essay,
6. General Studies – 1,
7. General Studies – 2,
8. Optional Subjects – History 1,
9. Optional Subjects – History 2,
10. Optional Subjects – Political Science -1,
11. Optional Subjects – Political Science – 2.
These are the 11 things. If we can coordinate and club all these 11, then we can make it as a team and can hit the goal. I really appreciate Mukund whom I met at Climb First to give these tips I applied and cleared Mains

ADVERTISEMENT
This page was tagged for
hd player (chak de india movie english subtitle)
watch chak de india tamil movie
chak de india movie
chak de india 1 movie
Chak de India Full Movie
Follow @fullhyderabad
Follow fullhyd.com on
About Hyderabad
The Hyderabad Community
Improve fullhyd.com
More
Our Other Local Guides
Our other sites
© Copyright 1999-2009 LRR Technologies (Hyderabad), Pvt Ltd. All rights reserved. fullhyd, fullhyderabad, Welcome To The Neighbourhood are trademarks of LRR Technologies (Hyderabad) Pvt Ltd. The textual, graphic, audio and audiovisual material in this site is protected by copyright law. You may not copy, distribute, or use this material except as necessary for your personal, non-commercial use. Any trademarks are the properties of their respective owners. More on Hyderabad, India. Jobs in Hyderabad.