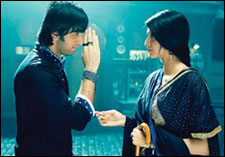 Samrat Sharma / fullhyd.com
EDITOR RATING
3.0
Performances
Script
Music/Soundtrack
Visuals
NA
NA
NA
NA
Suggestions
Can watch again
NA
Good for kids
NA
Good for dates
NA
Wait for OTT
NA
As the credits roll to Saawariya, Sanjay Leela Bhansali's newest opulent emotional drama, you can't help but notice his name all over the credits. Direction, of course, but also co-credits in screenplay, editing, music... hell, even costumes. As you see Bhansali stamping his presence all over this film with his manic self-obsessive style, the realization slowly dawns on you: Saawariya was never meant to be a debut vehicle for two semi-talented young star kids.

This is an out-and-out Bhansali film, his ode to himself, a film where he celebrates his kind of filmmaking, his own personal idiosyncrasies, and if two kids get their break when he makes this grand gesture, well, they should be grateful. So should we be, the privileged masses, for having been presented with such a grand vision, such showmanship, such... utter bollocks, of course. Saawariya may be a one-off, or may be something that finally lets us see Bhansali in his true form.

Any which way, unequivocally speaking, Saawariya is a vacuous cipher of a film, whose needlessly vague style and flash do not take away from the blank characters and the zero script it runs on. Saawariya also positively reeks of the director, and the kids are sidelined for what he wants to execute. Problem is, all the philosophy, all the maudlin punches, all of the deliberately shoehorned emotions are there for us all to see and recognize as fake.

No mistakes, this is a fake film. Faux emotions, cardboard characters, a script that fails to deliver, and a very very fake and dodgy emotional core. This is underlined for all of us the moment the film opens in a city that the script actually tells us does not exist. The city's art direction is based on everything the world has to offer, so gondolas, Venetian bridges, English streets, Persian domes, South-East Asian Buddha statues, and Baz Luhrmann channeled neon-lit city squares.

That's it right there, the problem with Bhansali's vision. It's so all over the place, it is rarely coherent, and never consistent. Fyodor Dostoevsky's White Nights, the story that the film is based on, was a nice little story of having loved and lost, a growing-up tale, and a story that reflected the social mores of the time and place. By taking away all that made the story unique, the film becomes another one of those boy-meets-girl tales.

Ranbir Raj (Ranbir Kapoor) is a young man with stars in his eyes who arrives in this fable town, and immediately lands a job to sing in a club, and also strikes a friendship with local prostitute Gulabjee (Rani Mukherjee). Right then and there, he asks her if he'll become a star. She replies with superstar, beginning many of the self-referential jokes that the film has, with all the subtlety of a driveby shootout.

Raj, as he likes to call himself, meets young Sakina (Sonam Kapoor) too, a lamenting damsel waiting for someone. She slowly warms up to him - how, don't ask, the man positively stalks her - and they strike up an easy friendship. While Raj loves the woman, she makes it clear that she is waiting for her one true love, Imaan (Salman Khan). They spend a lot of time talking and singing - oh God, the singing - until such time as Sakina gives up on waiting for Imaan.

What happens next should be apparent to not only classic literature buffs, but anyone who has seen such retrograde cinema on late Doordarshan re-runs. But the problem is not in the tale - it is, like I said, in the telling.

Bhansali's smartest move to launch these newcomers was to choose a story that focuses so absolutely on them, you can't help but pay attention. But such a move requires some very deft screenplay-writing and a dialog that keeps the viewers interested. This is something Imtiaz Ali just proved with his latest, but Bhansali's screenplay struggles to even keep us remotely interested in the characters, much less the story.

Add to that at least eleven songs and countless digressions by way of what I now call the Gulabjee episodes - Rani Mukherjee's third attempt to become the definitive prostitute of Bollywood - and the film begins to fall flat before the chorus has time to say ha ha ha haaaa.

Contrary to what you may take away from reading these impressions, the fact is that Bhansali is not a stupid, or even incompetent director. He has total control over the proceedings of the film, and it does not feel out of sync with itself ever. Loud background score, uncomfortable close-cut cinematography and cipher sets aside, the film is not technically a washout. All the technical staff is there to serve Bhansali's vision, and consistently does that.

Saawariya is just a very pompous film, something the director constructed to push himself as a grand showman more that anything. As the in-your-face references keep telling you, Ranbir Kapoor is the next successor to the Kapoor legacy, but what you also see is that Bhansali thinks of himself as the next director successor to the same legacy as well.

This is not a personal vision, however - this is a pandering of the basest of human emotions: pride. Possibly hubris as well. Only for those who don't get tickets for the other big one.
Share. Save. Connect.
Tweet
SAAWARIYA SNAPSHOT

See Saawariya full details
SAAWARIYA USER REVIEWS
1 - 9 OF 9 COMMENTS
POSITIVE  |  NEGATIVE |  NEWEST  |  OLDEST  |  MOST HELPFUL  |  LEAST HELPFUL
USER RATING
4.9
51 USERS
Performances
Script
Music/Soundtrack
Visuals
NA
NA
NA
NA
Can watch again - NA
Good for kids - NA
Good for dates - NA
Wait for OTT - NA
Stupid Sanjay on 21st Nov 2007, 5:34pm | Permalink
SS has to be Sanjay's mum. But even his mum would've laughed like a retarded babboon on amphetamine after watching Saawariya. I hate to flame, but common, I could not tolerate someone trying to get mad for calling Saawariya lousy. Given this site's criteria - hell, any site's criteria - this is the best rating Saawariya can ever get. Though I am disappointed that the reviewer could not give it the good ol' mighty fullhyd treatment...

And SS - Aata, Athidi and Chirutha ARE better than Saawariya. So are the other 200 movies that released this year. Saawariya at best is a commmon play. Too bad your idea of of a good movie is that. Looking at the bright side though - Sanjay's next movie can only be better - nothing can beat this at sucking.

RATING
2
Maverick 880 on 18th Nov 2007, 2:21am | Permalink
@MR . Editor : I have always found fullhyd's reviews and posts to be on the lines of what majority of hyderabadi's feel. But i guess u got it wrong in the case of OSO Vs Sawariya ..agreed sawariya is not a gr8 movie ..but i feel for u have followed the herd and got biased towards OSO.

RATING
4
The Editor on 16th Nov 2007, 11:06am | Permalink
S S: Thank you for the comments. Well, we rate movies for the _majority_ of Hyderabadi audiences, so there are at times likely be people who differ from our assessment. Given our criterion, our ratings' dependability should be judged by the eventual box-office performance of the films. You may differ with it, but that is fullhyd.com's basis for reviewing mainstream movies :).
RATING
4
S S on 15th Nov 2007, 5:09pm | Permalink
As usual copied the rating from Rediff. Used the "cool" way to insult the movie. Done. Got paid by full hyd - A day in the critics life.

you can't help but notice his name all over the credits. Direction, of course, but also co-credits in screenplay, editing, music

RATING
8
Nri Babu on 12th Nov 2007, 6:45pm | Permalink
This movie might not be a great one... but it is definitely worth a watch for many reasons. It has some good sets, directions, nice debutants, songs and decency. Why is it that the crowd only wants movies that have skin shows !
RATING
6
Sunshine Girl on 12th Nov 2007, 3:40pm | Permalink
Its blue. Its overflowing with needless songs and needless prostitutes. Nothing, absolutely nothing, in it makes sense.
RATING
2
I Am The King Sanjay Leela Bhansali on 10th Nov 2007, 2:28pm | Permalink
Only Mr. Bhansali can really enjoy this movie, because he it for himself...
RATING
2
Deepa on 10th Nov 2007, 10:26am | Permalink
bollywood's definitive prostitute!

ADVERTISEMENT
This page was tagged for
Saawariya hindi movie
Saawariya reviews
release date
Ranbir Kapoor, Sonam Kapoor
theatres list
Follow @fullhyderabad
Follow fullhyd.com on
About Hyderabad
The Hyderabad Community
Improve fullhyd.com
More
Our Other Local Guides
Our other sites
© Copyright 1999-2009 LRR Technologies (Hyderabad), Pvt Ltd. All rights reserved. fullhyd, fullhyderabad, Welcome To The Neighbourhood are trademarks of LRR Technologies (Hyderabad) Pvt Ltd. The textual, graphic, audio and audiovisual material in this site is protected by copyright law. You may not copy, distribute, or use this material except as necessary for your personal, non-commercial use. Any trademarks are the properties of their respective owners. More on Hyderabad, India. Jobs in Hyderabad.