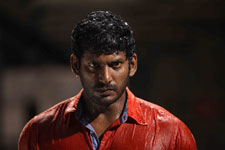 Ravi Kandala / fullhyd.com
EDITOR RATING
5.0
Performances
Script
Music/Soundtrack
Visuals
5.0
5.0
3.0
5.0
Suggestions
Can watch again
No
Good for kids
No
Good for dates
No
Wait for OTT
Yes
Halfway through Indrudu, this reviewer was wondering if the gods had smiled on him this week. After all, a good movie on Friday followed by a movie with a good first half on Saturday is a rare occurrence when you review Telugu movies for a living.

At the end of the second half, however, we realized that all said and done this was a Vishal movie, and the near perfect weekend would remain the elusive dream.

Vishal's template has always been the same - lover boy / family darling in the first half, followed by an interval action crescendo, a flashback and a violent end. In that respect, Indrudu is no different. The story follows the same template, with Vishal playing Indra, the only son of a loving mother, who goes about life trying to get himself a job that will fetch him Rs. 20,000 a month.

He finds the job, and then a girl who falls in love with him, and goes about his life until the interval bang throws everything out of gear. This is followed by a flashback, a mild whodunit and a violent climax, and a promise of better things.

What sets the first half apart is the medical condition that Indra is afflicted by - Narcolepsy. Narcolepsy is a sleep disorder where a person sleeps excessively. Indra has a peculiar version of Narcolepsy called Cataplexy which causes him to fall asleep whenever he feels a strong emotion.

So Indra falls asleep out of happiness when he is told he is selected for a job, due to fear when he is crossing a road, due to excitement when he watches a cricket match, due to arousal while watching a Shakeela movie, and out of shock whenever he hears a loud unexpected noise - in short, he falls asleep in the most inopportune moments and unsuitable places. He can still hear and understand what's going on around him, but can only wake up when his brain decides to switch itself back on.

The medical condition is exploited beautifully in the first half. The director does not just milk the condition for some laughs, but also writes some genuinely heart-touching scenes about the travails of a person afflicted with such a disease. The interval twist is also tied up well with the hero's condition. Thiru also seems to have done some amount of research, and Vishal's condition turns out to be an integral part of the story rather than just a random something incorporated to make the film appear different.

The same disorder proves to be part of the undoing in the second half, with Vishal conquering the malaise all too quickly and conveniently. Surely, if it were as easy as shown, he could've done it much earlier. The fast unraveling of the mystery and the convoluted flashback spoil the fun in the second half of the movie, too.

Vishal does well as the guy with a simple wishlist while Lakshmi Menon plays out her part competently. It is a bold role, and the actress does what is required without going overboard. The supporting cast does not have much to do, except Iniya who does a stellar job in the flashback.

G V Prakash's music is forgettable. The other technical values are all fine, as expected of a Vishal movie.

Indrudu could've been so much better if it were not afflicted by the "Vishal" syndrome. However, it still is a mildly interesting take with some decent laughs in the first half followed by a semi-interesting whodunit in the second.
Share. Save. Connect.
Tweet
INDRUDU SNAPSHOT 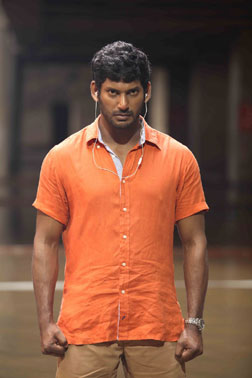 ADVERTISEMENT
This page was tagged for
Indrudu telugu movie
Indrudu reviews
release date
Vishal, Lakshmi Menon
theatres list
Follow @fullhyderabad
Follow fullhyd.com on
About Hyderabad
The Hyderabad Community
Improve fullhyd.com
More
Our Other Local Guides
Our other sites
© Copyright 1999-2009 LRR Technologies (Hyderabad), Pvt Ltd. All rights reserved. fullhyd, fullhyderabad, Welcome To The Neighbourhood are trademarks of LRR Technologies (Hyderabad) Pvt Ltd. The textual, graphic, audio and audiovisual material in this site is protected by copyright law. You may not copy, distribute, or use this material except as necessary for your personal, non-commercial use. Any trademarks are the properties of their respective owners. More on Hyderabad, India. Jobs in Hyderabad.