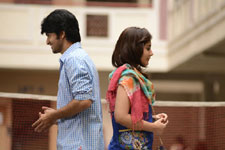 Ravi Kandala / fullhyd.com
EDITOR RATING
6.0
Performances
Script
Music/Soundtrack
Visuals
6.0
5.0
7.0
7.0
Suggestions
Can watch again
Yes
Good for kids
Yes
Good for dates
Yes
Wait for OTT
No
It is tough to grasp anything from the name of a Telugu movie. Take the name Orange, for example - what would you infer about a film with the name Orange? Is it a story that takes us through the travails of a fellow who grows oranges? Or a love story set in orange orchards? And what about the name Mirchi? The jokes just tend to write themselves with such titles.

Oohalu Gusagusalaade (though it is a tongue twister for many) does not fall into this category. Once you see the movie, you realise that the title actually has a good connection with the movie. The entire film, just like its pristine Telugu title, is also steeped in good language, and has so much good Telugu used that several of our youngsters might find it difficult to follow it.

The film has a pretty simple storyline - Venkateswara Rao (Naga Shaurya) is the son of a former DD newsreader, and aspires to become a newsreader like his dad. He is currently, however, selling vegetable slicers on a teleshopping show in UBTV. His boss Uday Bhaskar (Srinivas Avasarala), who owns UBTV, is past marriageable age. The man is unable to net himself a suitable match as he turns into jelly every time he approaches a girl or a girl approaches him.

Uday, who keeps avoiding the topic of his marriage, falls for Sirisha (Rashi Khanna) the moment he sees her photograph. He takes advantage of Rao's desire to become a newsreader, telling him that he will appoint him as the newsreader on the show provided he helps Uday in his love story.

The story takes a total Jaanemann style narrative here with Rao guiding Uday over Bluetooth. All is well in paradise before we are told about Venkateswara Rao's and Sirisha's pasts. How this affects Rao in his personal and professional lives forms the plot of the flick.

Oohalu Gusagusalaade is directed quite well by Srinivas Avasarala (the flagpole substitute comedian who entertained us no end in Ashta Chemma). The film has a light tone throughout and never goes overboard with the emotions or the drama. The humour is subtle and well-written, while the romance is understated. The dialogues are in pure Telugu, with no urbanization.

Avasarala, however, also suffers from a desire to show off too much. He has a poster of a Woody Allen movie in the background in one of the scenes with his name as the director. Also, some of the similes used in the film are quite difficult to comprehend. The movie is also quite slow in the first half, and could've done with some trimming.

The film revolves primarily around the 3 leads, and all of them do a competent job. The only complaint is the lip sync. The music is good, the lyrics are better. The technical values are all quite professional - the producers seem to have pumped in good money.

It's possible to do miracles if you are not burdened by the images your stars carry and the gargantuan expectations their fans have. No wonder then that the most refreshing movies in the Telugu film industry are those starring newcomers. Oohalu Gusagusalade is the breezy monsoon entertainer that you should not miss this season.
Share. Save. Connect.
Tweet
OOHALU GUSAGUSALAADE SNAPSHOT 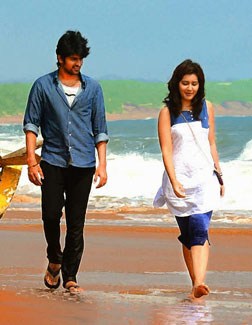 ADVERTISEMENT
This page was tagged for
[full] ala modalaindi movie dvdrip telugu
Oohalu Gusagusalaade telugu movie
Oohalu Gusagusalaade reviews
release date
Naga Shourya , Rashi Khanna
Follow @fullhyderabad
Follow fullhyd.com on
About Hyderabad
The Hyderabad Community
Improve fullhyd.com
More
Our Other Local Guides
Our other sites
© Copyright 1999-2009 LRR Technologies (Hyderabad), Pvt Ltd. All rights reserved. fullhyd, fullhyderabad, Welcome To The Neighbourhood are trademarks of LRR Technologies (Hyderabad) Pvt Ltd. The textual, graphic, audio and audiovisual material in this site is protected by copyright law. You may not copy, distribute, or use this material except as necessary for your personal, non-commercial use. Any trademarks are the properties of their respective owners. More on Hyderabad, India. Jobs in Hyderabad.