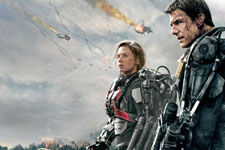 Neha Mathur / fullhyd.com
EDITOR RATING
7.0
Performances
Script
Music/Soundtrack
Visuals
6.5
6.0
6.0
7.0
Suggestions
Can watch again
Yes
Good for kids
No
Good for dates
Yes
Wait to rent it
No
We have only one life to live, and so it becomes our absolute, irrefutable moral duty (pardon the adjectives, we swallowed a whole thesaurus!) to make sure you spend time with a movie that will deliver the goods. A sci-fi blockbuster - yes! Solid CGI - yes! Tom Cruise's overacting button deactivated - yes!!!

There you have it, lock, stock, and barrel. Edge of Tomorrow, directed by Doug Liman of "The Bourne Identity" fame, strikes gold with a military sci-fi flick that entertains without lapsing into bad science-fiction drudgery.

Based on the Japanese sci-fi light novel "All You Need Is Kill" by Hiroshi Sakurazaka, and initially titled the same as the book, Liman's film is predictably, Westernized, for a pan-English audience. Had they stuck to the original title, the film would have grabbed more eyeballs. Let's just say that Edge Of Tomorrow sounds dangerously philosophical.

Then again, what's in a name? A lot, if the name is Tom Cruise. His detractors would have us believe that he is a spent force, but Cruise proves them wrong. After all, he is a veteran when it comes to science fiction / fantasy. Minority Report, War Of The Worlds, Oblivion... err, wait, maybe we should strike off that last one.

This time around, Cruise plays a media relations officer with the army, Major William Cage, a man who goes from selling the idea of war to being smack in the middle of one. The planet is under siege, invaded by a race of near-perfect aliens called Mimics, and the only metal of hope is a new battle suit.

Disinclined to dying in battle and averse to martyrdom of any sort, the Major attempts desertion, and makes matters worse. Demoted, Private Cage is literally dropped into the battlefield, off the coast of Normandy (World War II revisited), where he scampers for safety like a lost bunny, until he meets Sergeant Rita Vrataski (Emily Blunt), a Spartan-like combatant who slaughters the Mimics with dry precision.

Then, in the next moment, they both die.

Then, Cage wakes up to find himself at the start of the same day.

Fear not, this is not that God-forsaken foul-up called the spoiler.

Live. Die. Repeat. This is what the trailer tells you, and that is as far as we will go.

A time loop is a goldmine for any director (remember "Groundhog Day"?), and lends Liman a great ploy to work with. It's like playing a high-voltage video game - you can pause and go right back to start, and then engage in combat all over again, till you knock the stuffing out of the enemy-alien. It's like chancing upon life's ultimate cheat code - the ability to fix the day that was.

Private Cage gets just that - the power to reset the day and try tearing down an invincible enemy. His mentor and guide, in this battle-on-repeat-mode, is the real hero in the film - Sergeant Rita Vrataski or Full Metal Bitch, poster child for the war. She wields not a gun but a savage machete (a rotor-blade-turned-weapon), butchering alien foot soldiers without the slightest hint of fear.

One could say that similar to her reel character, Emily Blunt exceeds Tom Cruise, showing off her acting chops. While both come across as sincere performers, it is Blunt's display of restrained strength and mettle that propels her to the top.

Apart from the actors, there is something else takes the film to next level - the unexpected humour. Edge Of Tomorrow is laced with funny bits, moments that root the ominous landscape of war to a basic humanity. A good sci-fi will take you as far away from probability as it can, only to remind you how human it all is.

The battle scenes on the beach are tight, well-crafted pieces of (futuristic) war footage. Small details, like specks of sand flying everywhere, add to the overall effect, as does the absence of a background score. All you hear are the deafening sounds of shot-down aircraft and deadly explosions.

While Cage drags his feet in the heavy battle suit, fearful and shaky, the screenplay never becomes laborious or heavy-handed. It is a simple but solid story that grips your attention from the get-go.

What is also interesting is that while CGI is used to create an apocalyptic world, it is not the mainstay of the film. As a matter of fact, the spindly, octopus-like alien beings appear on-screen rather sparingly. Edge Of Tomorrow invites you to witness the making of a true war hero, not so much to relish creature antics or alien vs. human fistfights.

The movie invites you to grow with Cage - to feel his anguish, his terror on the first day of the battle, and then to witness a transformation that makes him the archetypal saviour. Whether he can get time on his side is another matter.

Edge Of Tomorrow also keeps a fine balance - it does not become a film dominated only by CGI or corny special effects, nor does it become a deep lesson in philosophy. Conveniently, masculinist notions of war and courage are never questioned (yes, that would be the end of American films), but that is to wish for the moon.

For a film that is stuck in a (time) loop, director Doug Liman keeps the action fresh and volatile. Edge Of Tomorrow is engrossing, and is sure to keep you on the edge of your seat. Never a dull moment, not here!
Share. Save. Connect.
Tweet
EDGE OF TOMORROW (3D) SNAPSHOT 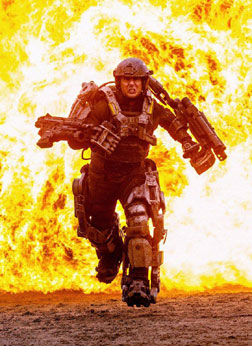 ADVERTISEMENT
This page was tagged for
Edge Of Tomorrow (3D) english movie
Edge Of Tomorrow (3D) reviews
release date
Tom Cruise, Emily Blunt
theatres list
Follow @fullhyderabad
Follow fullhyd.com on
About Hyderabad
The Hyderabad Community
Improve fullhyd.com
More
Our Other Local Guides
Our other sites
© Copyright 1999-2009 LRR Technologies (Hyderabad), Pvt Ltd. All rights reserved. fullhyd, fullhyderabad, Welcome To The Neighbourhood are trademarks of LRR Technologies (Hyderabad) Pvt Ltd. The textual, graphic, audio and audiovisual material in this site is protected by copyright law. You may not copy, distribute, or use this material except as necessary for your personal, non-commercial use. Any trademarks are the properties of their respective owners. More on Hyderabad, India. Jobs in Hyderabad.