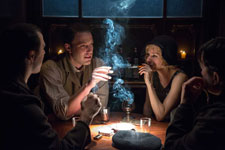 Swaroop Thotada / fullhyd.com
EDITOR RATING
5.5
Performances
Script
Music/Soundtrack
Visuals
7.0
5.0
7.0
8.0
Suggestions
Can watch again
No
Good for kids
No
Good for dates
No
Wait to rent it
Yes
Gangster flicks work best when they are centered on a charismatic and powerful main character (with campy takes like Goodfellas being an exception). Be it the spine-chilling viciousness of John Dillinger or the coolth-spewing assuredness of Vito Corleone, charm always aided these anti-heroes in veiling their vulnerabilities. Or there is a moral ambiguity that the characters mask behind their likeability that can be exploited for drama. We were all fascinated by the split-second appearances of Walter White's inner monster in the TV series Breaking Bad and we patiently waited to finally catch it in full display.

That's where Affleck's Live By Night falters. Affleck plays Joe Coughlin in such a bland fashion that any other character in the film could have easily over-shadowed him had they been given slightly longer screentime. And nor does his character invite incisive scrutiny. He becomes the weak link that undoes an otherwise promising premise and plot.

Joe Coughlin (Ben Affleck) declares himself an outlaw once he returns from war, and makes a living robbing card games. He is aided by Emma Gould (Sienna Miller), who is the mistress of the bigshot Irish gangster Albert White (Robert Glenister). He hatches a plan for one last heist, a bank robbery, but things go haywire when Albert finds out of his affair with Emma. He lands in prison, and the only thing he thinks of when he comes out is getting back at Albert. He joins the Italian rival of Albert, Maso Pescatore (Remo Girone), and starts expanding the latter's empire.

You meet a lot of interesting characters in the story. Thomas Coughlin, played by Brendon Gleeson, is the uptight tough cop that disowns his son, but he blackmails the officials to bargain reduced time for him. Then there's Irving Figgis (Chris Cooper), the sheriff that watchdogs the geographical boundary agreements between gangs. Figgis goes out of his way to say that though he rubs shoulders with the corrupt and tolerates them, he is but incorruptible.

Irving's daughter Loretta (Elle Fanning) heads for Hollywood dreaming of becoming an actress but is shattered by drugs. She returns to become an evangelist that denounces personal liberty, and is more than a menace to Coughlin who wants to start a casino there. You are teased with a There Will Be Blood-style ideological conflict between her and Coughlin, but like the rest of the characters, she too gets brushed aside by the hurried plot. Also Zoe Saldana's Cuban independent businesswoman is rendered a teary and clingy love interest as soon as she falls for him.

However, as mentioned, the weak link is Affleck. A veteran who has reinvented himself as a petty robber that raids card games and robs goons, Coughlin doesn't wear his conscience on his sleeve, but has his qualms about killing people. And if this subtle conflict in character doesn't invite your intrigue, only the acting is to blame. Affleck's understated performance gives you the bad man, but a more thoughtfully cast actor might have pulled off a badass.

Or perhaps racy screenplays are the forte of Affleck, the director. His Gone Baby Gone and Argo benefit from taut narratives, punctuated by nail-biting action and plot twists. Here he tries to tell a story that spans over years, and it feels like nothing much happens. It is possible that the fault lies with the way it is adapted for screen, which is again done by Affleck. Because the film is based on a novel by Dennis Lehane, whose previous works gave us three wonderful films: Clint Eastwood's Mystic River, Martin Scorsese's Shutter Island and Affleck's own Gone Baby Gone.

Also with his moral compass dished out to us too early in the film, there is not much left to explore, no layers left to be peeled and no temptations looming behind to pounce on his conscience.

Plus, racial tensions of the 1920s, xenophobic politics, the fanaticism of Ku Klux Klan, the friction between religious fanatics and liberal ideologues, the prohibition-era business strategies, betrayals, assassinations, shoot-outs... the film is also cluttered with too much plot and too many characters to focus on anything, and just plods through these.

But technically, we see Affleck at his prime here. Robert Richardson brings neo noir style lighting to some scenes, and the shootouts are impeccably pulled off. The gorgeous period production design and the scenic locales all reveal the sky-high ambitions of this project. If only Affleck hired a better actor than himself to play the protagonist, this film would have been in a different league.
Share. Save. Connect.
Tweet
LIVE BY NIGHT SNAPSHOT 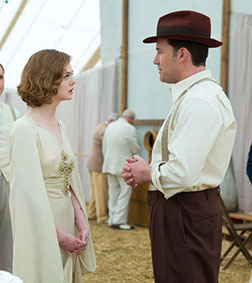 ADVERTISEMENT
This page was tagged for
Live By Night english movie
Live By Night reviews
release date
ben Affleck, Chris Cooper
theatres list
Follow @fullhyderabad
Follow fullhyd.com on
About Hyderabad
The Hyderabad Community
Improve fullhyd.com
More
Our Other Local Guides
Our other sites
© Copyright 1999-2009 LRR Technologies (Hyderabad), Pvt Ltd. All rights reserved. fullhyd, fullhyderabad, Welcome To The Neighbourhood are trademarks of LRR Technologies (Hyderabad) Pvt Ltd. The textual, graphic, audio and audiovisual material in this site is protected by copyright law. You may not copy, distribute, or use this material except as necessary for your personal, non-commercial use. Any trademarks are the properties of their respective owners. More on Hyderabad, India. Jobs in Hyderabad.