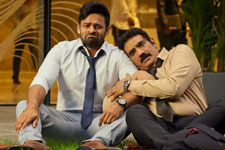 Chaitanya Karthik / fullhyd.com
EDITOR RATING
6.0
Performances
Script
Music/Soundtrack
Visuals
7.0
5.0
7.0
5.0
Suggestions
Can watch again
No
Good for kids
Yes
Good for dates
No
Wait for OTT
Yes
Remember Sathamanam Bhavati? We all loved it. But director Maruthi Dasari loved it so much that he chose to make it again, albeit with a few changes here and there. He was however also aware that the audience would instantly recognize the similarities between Sathamanam Bhavati and Prathi Roju Pandage. Which is why he had Rao Ramesh saying this seemed like the Sathamanam Bhavati idea.

Of course, it's not the same story, one would argue. There, it was the parents lying that they were getting divorced. Here, it is Raghuramayya (Sathyaraj), a man in his seventies, telling them the truth that he has lung cancer and has less than five weeks to live. Also, the protagonist in that movie is a native and his love interest lives abroad. Here, the protagonist lives abroad and his love interest is a native. But there end the differences. The rest of Prathi Roju Pandage doesn't really appear that different when you juxtapose it with Sathamanam Bhavati.

Again, there is this argument that it is probably a formula, something that is bound to make a movie a success. But formulas work only when the presentation is refreshing, and Prathi Roju Pandage doesn't make the cut there, either. The pictures, the conflicts, the fights, the resolutions - they are all more or less the same as in the movie that created the formula.

So Sai (Sai Dharam Tej) decides to celebrate every day of the last few days of his grandfather Raghuramayya (and hence the movie's name). He is the only one in his family who actually cares about his grandfather, and flies down to Rajahmundry to spend time with him. He also agrees to fall in love with Angel Arna (Raashi Khanna), a TikTok star, because his grandfather sort of said so. The rest of the family members also fly down to Rajahmundry when they get to know that Sai is getting married. Except that they want their father to die ASAP so that they can go back to whatever lives they are busy with.

The story is pretty inconsistent. When you see Rao Ramesh's and his siblings' attitude towards their father, you feel that they probably never shared a great bond. But in the end you see that all of them loved their father very much and left the house very reluctantly. How and why this change happened, nobody knows. Also, the scene where they realize that they've treated their father unfairly (thanks to a monologue from Sai) is too abrupt, and inconsistencies like these make it difficult to be invested in an otherwise decent film.

Sathyaraj and Rao Ramesh are incredible performers - the former is the soul of the film, and the latter is its heart, and the one who keeps the movie alive. Ramesh's love for his own son, his annoying eccentricity as a son himself and his lust for money as a businessman, all coupled with his impeccable comic timing, are what really make Prathi Roju Pandage a decent watch. Sathyaraj, with his antics and words, is endearing and responsible. The two of them carry the entire movie on their shoulders, and whatever success the movie sees can be conveniently attributed to these two outstanding actors.

Sai Dharam Tej really doesn't wow you with his performance, and the limelight is almost never on him in the movie. Raashi Khanna is nice as Angel Arna - irritating yet somehow bubbly. If only her character had more scope in the story. She is almost non-existent after the scene where she agrees to marry Sai, which is a very unconventional and unfunny way of getting someone to agree to a marriage. She lasts longer during the songs than in the story, something that unfortunately is what most directors envision for their heroines. The rest of the cast are good in their roles, and although some of the scenes are really silly and some jokes are crass, their performance is decent.

Thaman does a great job of elevating the movie with the songs and the background score - the man seems to be in his prime. The songs are decent but it's the background score that really makes you feel the pain of the old man whose children are just waiting to see him pass away. The editing and the visuals meet professional standards.

Prathi Roju Pandage is only a one-time watch, and only if you haven't already watched Sathamanam Bhavati.
Share. Save. Connect.
Tweet
PRATI ROJU PANDAAGE SNAPSHOT 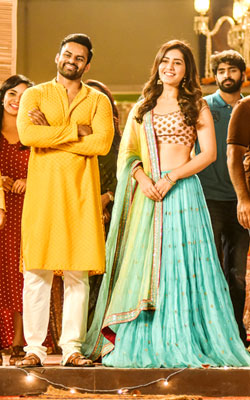 ADVERTISEMENT
This page was tagged for
Prati Roju Pandage Full movie Telugu online watch
prathiroju pandage fillhyd
prathiroju pandage fullhyd
prathi roju pandage full movie in telugu
prathi roju pandaga full movie telugu online watch
Follow @fullhyderabad
Follow fullhyd.com on
About Hyderabad
The Hyderabad Community
Improve fullhyd.com
More
Our Other Local Guides
Our other sites
© Copyright 1999-2009 LRR Technologies (Hyderabad), Pvt Ltd. All rights reserved. fullhyd, fullhyderabad, Welcome To The Neighbourhood are trademarks of LRR Technologies (Hyderabad) Pvt Ltd. The textual, graphic, audio and audiovisual material in this site is protected by copyright law. You may not copy, distribute, or use this material except as necessary for your personal, non-commercial use. Any trademarks are the properties of their respective owners. More on Hyderabad, India. Jobs in Hyderabad.