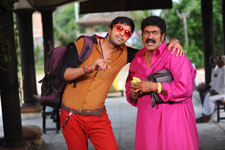 Ravi Kandala / fullhyd.com
EDITOR RATING
3.0
Performances
Script
Music/Soundtrack
Visuals
3.0
3.0
1.0
4.0
Suggestions
Can watch again
No
Good for kids
No
Good for dates
No
Wait to rent it
No
People who've seen Kal Ho Na Ho will surely remember one scene where Shahrukh asks people if they remember the last time they saw Preity Zinta laugh. We were asking ourselves something similar today - when was the last time we actually saw a funny movie from Allari Naresh, who's supposedly this generation's Rajendra Prasad? And the last time was... hmmmmmmmmmmmmm...

Naresh's movies come and go with amazing regularity, and it is extremely difficult to differentiate one Naresh movie from another. In that matter, Jump Jilani is certainly different - it has Naresh in a double role, and can certainly be remembered as the movie that starred Naresh in two roles and still failed to make us laugh.

The film is about two brothers, Sattibabu and Rambabu, and their hotel Satyanarayana Vilas Coffee Club in Nidadavolu. Sattibabu is a hardworking guy who wants to save the hotel from the financial ruin it is in, while Rambabu is a smooth-talking conman who wants to sell the hotel off and make some money. Satti's love interest is Madhavi (Isha Chawla) while Rambabu has Ganga (Swathi Deekshit) for his duets. How the two brothers manage to save their hotel is narrated in a tale dragged on for nearly 3 hours.

Sattibabu, the director who's churned out most movies with Naresh so far, fails to make use of the incredibly large cast that he's given. The film includes every comedian including Posani, Raghu Babu, Venu Madhav and JP, but none of them is given much to work with. The script has immense potential, but Satti Babu should've wrapped it up in around 2 hours for the story to work. The punchlines are few and far between, and do not tickle the funny bone.

Naresh passes muster acting-wise, doing what he usually does. It is funny, though, seeing him as a simpleton in all the scenes and then getting into hip-hop mode in the songs. Isha Chawla is there for her "star power" (we think), while Swathi fills in the glam quotient (read - in the beach song, Isha takes a dip in her saree while Swathi takes a dip in a skimpy dress). The supporting cast act as fillers and do not have much scope.

The music is functional and the songs just add to the runtime. The producers have spent a good bit of money, and it reflects in the rich frames.

In the end, Jump Jilani is yet another Naresh vehicle that falls flat in its attempts to make us laugh. Watch the umpteenth rerun of Sudigadu or Kitakitalu that will surely be on TV later in the week.
Share. Save. Connect.
Tweet
JUMP JILANI SNAPSHOT 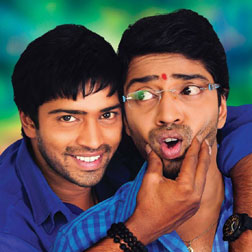 ADVERTISEMENT
This page was tagged for
Jump Jilani telugu movie
Jump Jilani reviews
release date
Allari Naresh, Isha Chawla
theatres list
Follow @fullhyderabad
Follow fullhyd.com on
About Hyderabad
The Hyderabad Community
Improve fullhyd.com
More
Our Other Local Guides
Our other sites
© Copyright 1999-2009 LRR Technologies (Hyderabad), Pvt Ltd. All rights reserved. fullhyd, fullhyderabad, Welcome To The Neighbourhood are trademarks of LRR Technologies (Hyderabad) Pvt Ltd. The textual, graphic, audio and audiovisual material in this site is protected by copyright law. You may not copy, distribute, or use this material except as necessary for your personal, non-commercial use. Any trademarks are the properties of their respective owners. More on Hyderabad, India. Jobs in Hyderabad.