Inside Out (3D) Review 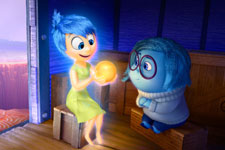 Nupur Barua / fullhyd.com
EDITOR RATING
7.0
Performances
Script
Music/Soundtrack
Visuals
7.0
8.0
7.0
8.0
Suggestions
Can watch again
Yes
Good for kids
Yes
Good for dates
Yes
Wait to rent it
No
Animation features are no longer only for children, as we all know. Inside Out, the latest from Pixar, delves into the mind of a little girl, and maps out the labyrinth that exists inside. The writers and producers consulted psychologists to give the script the credibility that it deserves, but, as only they know how, managed to insert enough fun and laughter to make it a wholesome entertainer, for kids and adults alike.

When Riley Anderson (Kaitlyn Dias) first opens her eyes and smiles at her parents (Kyle McLachlan and Diane Lane), the headquarters of her mind has one resident - Joy (Amy Poehler). Joy is responsible for Riley's emotions and memories, but as Riley grows older, the headquarters see newer emotions - Sadness (Phyliss Smith), Fear (Bill Hader), Anger (Lewis Black) and Disgust (Mindy Kaling). These five manifestations of Riley's mind collectively control her thoughts and passions, and Joy is the undisputed leader of the gang.

Life is great, with the Five alert to every situation in Riley's life, sleeping only when she does. Riley, who plays ice hockey like a champ, is now 11 years old, and thanks to Joy, she is a happy kid. What the Five do not expect is the sudden change in Riley's life, which begins when the Andersons relocate from Minnesota to San Francisco. Despite the optimistic outlook the family tries to maintain, things go wrong as they try to settle in, and the Five elements struggle to adjust to the chaos within Riley's mind.

The first thing that strikes you about Riley is that she is far removed from the girly Disney stereotype. Which does not make her either androgynous or tomboyish. She is just Riley, a happy girl who suddenly gives in to her other baser emotions, such as fear and anger. Inside Out has been promoted as an "emotion picture", and you have to watch it to know why.

Again, unlike other candyfloss stories of chirpy little girls, this movie wants to tell you that you can never underestimate the power of sadness. Riley's personality develops only when she allows herself - or when Joy, the undisputable leader of the emotion pack allows her - to fully experience disgust, fear, anger and sadness.

This is a powerful statement coming from a studio best known for its emphasis on an overload of cuteness. Once the story moves out of Riley's mind's HQ and goes into the myriad land of her memories, which also has memory islands (family, friendship, honesty and so on), the action becomes grittier and dangerous. The appearance of her imaginary friend Bing Bong (Richard Kind) and the realisation that he will soon be nothing more than a forgotten memory is heart-wrenching. The screenplay deals with egos, sacrifices, relationships and ethics, amongst others, to explain the struggles that Riley goes through as she tries to adjust to a new life.

Although the film, like most cute animated features, has a happy ending, the journey to the end is not sugar-coated. Some may find this aspect a little complicated, and it is likely that adults will understand the movie more than their kids will. Despite the oversimplification of concepts, the film loses steam somewhere after the second half, and tends to become repetitive. It picks up towards the end, however, and the action, or the race to the finish, becomes pretty exciting.

All the voice actors seem overenthusiastic with their dialogue delivery, and this may irritate a little. Amy Poehler, for example, could have toned down just a bit, and Phyliss Smith could have injected some range in her monotonous dialogues.

Given that the movie deals with an unknown dimension of the human psyche, it makes sense to watch it in 3D. It just enhances the story, but be prepared for the onslaught of colourfulness.

Inside Out is one of Pixar's most original concepts, ever, and that it has been executed pretty well. It is also clever and funny, and will gently nudge you into believing that it is all right to give vent to your emotions once in a while - within certain limitations, of course. The film is quite thought-provoking, and you should expect a whole lot of questions from your kids, but you will be glad you watched it with them.
Share. Save. Connect.
Tweet
INSIDE OUT (3D) SNAPSHOT 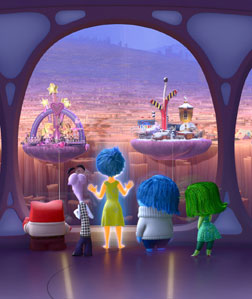 ADVERTISEMENT
This page was tagged for
telugu inside out (english) movies
Inside Out (3D) english movie
Inside Out (3D) reviews
release date
Amy Poehler - Joy (voice), Phyllis Smith - Sadness (voice)
Follow @fullhyderabad
Follow fullhyd.com on
About Hyderabad
The Hyderabad Community
Improve fullhyd.com
More
Our Other Local Guides
Our other sites
© Copyright 1999-2009 LRR Technologies (Hyderabad), Pvt Ltd. All rights reserved. fullhyd, fullhyderabad, Welcome To The Neighbourhood are trademarks of LRR Technologies (Hyderabad) Pvt Ltd. The textual, graphic, audio and audiovisual material in this site is protected by copyright law. You may not copy, distribute, or use this material except as necessary for your personal, non-commercial use. Any trademarks are the properties of their respective owners. More on Hyderabad, India. Jobs in Hyderabad.