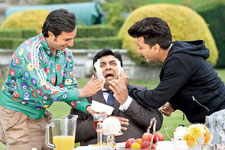 Neha Mathur / fullhyd.com
EDITOR RATING
3.5
Performances
Script
Music/Soundtrack
Visuals
3.5
3.0
3.0
5.0
Suggestions
Can watch again
No
Good for kids
No
Good for dates
No
Wait for OTT
Yes
What does Sajid Khan eat? No, wait - that was an earnest question. And now we know. He traps the audiences in a dark movie hall and then feasts on them, chewing their unsuspecting brains till they go stark raving mad.

So leave your brains at home. Unless you don't mind your upper storey turning to mush. This poor reviewer has already lost her mind. Bear with us, gracious readers, for this blasted review might be just as bad as the film. Ouch.

In one word, Humshakals is uninspired. It reeks of incompetence, and you begin to wonder whether you have, in fact, misplaced your funny bone. You wait and hope that something will come up and you will laugh yourself silly. You are prepared for large helpings of inane, over-the-top humour (Sajid hai bhai!), but all you get is numbing boredom.

So there are three Saifs, three Riteshs and three Rams - the good, the bad and the gay. An evil mama, Kans (Ram Kapoor), through foul means, attempts to seize the business empire of his nephew Ashok (Saif Ali Khan) in London. He declares Ashok "mad" (like rabid, doggy mad), and a comedy of errors ensues with proliferating humshakals dressed in striped night suits and red frocks. Chunky Pandey as drug dealer Bijlani is included in the list for good measure.

The script's main headquarters are a sombre-looking mental institution in London replete with a "The Great Dictator" lookalike warden (Satish Shah) and a secret, underground ward holding a dangerous patient. Mental illness is the butt of much of slapstick comedy, but here it only fizzles, and falls flat on its face.

Sajid Khan consults his private book of stereotypes and uses every trite and offensive joke that there is. The mentally ill, gay men, midgets, women, and erstwhile king of malevolence Pran - no one is spared. Don't get us wrong - we aren't being uptight, whacking a film because it is insanely crude and ham-handed (well, maybe we are). It's just that it just isn't funny! This must be why Bipasha Basu declined to promote the movie - she must be squirming.

The main leads should be squirming, too. Saif Ali Khan and Riteish Deshmukh babble like 5-year-olds (and it is an insult to all 5-year-olds that live on the planet). Ram Kapoor is massively underutilised. And as for Tamannah Bhatia, Basu herself and Esha Gupta, their cardboard cutouts could have replaced them - so negligible is their presence.

In all fairness, there are a handful (by handful we mean two) of scenes where you feel that the film is warming up, ready to take off, but all in vain. Also, good actors can save the most preposterous screenplay. But with Humshakals, Sajid Khan is unable to tap into the genuinely comedic selves of his main actors. Saif Ali Khan is especially excruciating to watch. Riteish Deshmukh fares a little better though there are times when the bland dialogue drowns him. Ram Kapoor is sinister as the vile Kans Mama.

Songs are interspersed (relief from Sajid's comedy?) to give space to the actresses in their scant robes, uh, roles. "Caller Tune" is a foot-tapping number, literally - choreographer Ganesh Acharya has the actors tapping one foot, and then the other, and that is all they do through the entire song. The music is average at best, and don't get us started on the lyrics.

Heyy Baby, Housefull, and Housefull 2, and now Humshakals - when will this madness stop?

When will potential sexual assault (man on man doesn't make it right) stop being humuorous?

When will Sajid Khan take himself seriously?

This comedy is a giant error. Overfed on PJs and puerile dialogue, Humshakals is futile. Sajid Khan claims that this is his tribute to Kishore Kumar, Peter Sellers and Jim Carrey. We know what Jim would say if he saw this one - "Somebody stop him!!!"
Share. Save. Connect.
Tweet
HUMSHAKALS SNAPSHOT 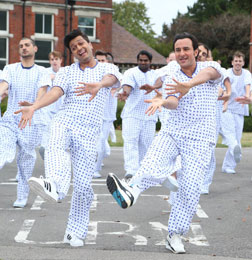 ADVERTISEMENT
This page was tagged for
Humshakals hindi movie
Humshakals reviews
release date
Saif Ali Khan, Riteish Deshmukh
theatres list
Follow @fullhyderabad
Follow fullhyd.com on
About Hyderabad
The Hyderabad Community
Improve fullhyd.com
More
Our Other Local Guides
Our other sites
© Copyright 1999-2009 LRR Technologies (Hyderabad), Pvt Ltd. All rights reserved. fullhyd, fullhyderabad, Welcome To The Neighbourhood are trademarks of LRR Technologies (Hyderabad) Pvt Ltd. The textual, graphic, audio and audiovisual material in this site is protected by copyright law. You may not copy, distribute, or use this material except as necessary for your personal, non-commercial use. Any trademarks are the properties of their respective owners. More on Hyderabad, India. Jobs in Hyderabad.