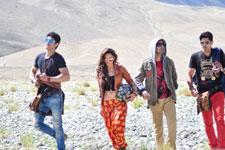 Neha Mathur / fullhyd.com
EDITOR RATING
3.0
Performances
Script
Music/Soundtrack
Visuals
3.0
3.0
5.0
5.0
Suggestions
Can watch again
No
Good for kids
No
Good for dates
No
Wait for OTT
Yes
This is exactly why reviewers exist - to take a hit for you, fellow movie patrons! The title of this one pretty much sums up a catastrophic smashup that some might call a film. End of review? We wish!

How bad can a film about 4 BFFs be, you ask? Don't! Director Kabir Sadanand surely did not mean for F*UGLY to do serious business, because all the grave moments end up false and funny. Writer Rahul Handa must have dug out an old school play (to tap into the "youth" of today) because F*UGLY does not have a voice of its own - it attempts to sound like Fukrey and feel like Rang De Basanti; and fails miserably at both.

The first 5 minutes of the film, comprising rushes of an army contingent saluting and a young man who approaches the Amar Jawan Jyoti at India Gate, might pique your interest. After that F*UGLY is one downhill ride, straight to movie crapland.

With the help of the ever-dependable flashback device, we are "fuglied" to the past, happier times, when four chaddi buddies had it good. Dev (Mohit Marwah), Gaurav (Vijender Singh), Devi aka Daayan (Kiara Advani), and Aditya aka Haggu (Arfi Lamba) possess all the synthetic markers of urban hipsters. Farmhouse party? Check. Biking through Leh? Check. Coarse jokes? Check.

Enter Haryanvi-spouting villainous cop Inspector Chautala (Jimmy Shergill). Exit fun times. The humdrum plot sets in motion the customary snowball effect, where one nasty situation leads to another till the four friends are thoroughly covered in their own mess.

Atrocious editing ensures that F*UGLY trips and stumbles to its sorry end, so much so that the film's progression feels like a clumsily heaped pile of newsy bytes. There is sexual harassment, police corruption, dirty politics, income tax raids, drug use, attempted assassination, nationalistic fervour - phew! The shoddily conceived onslaught of social issues reduces their serious import, and feels like an evening spent with a hyperbolic news channel.

The most troubling bit of this ordeal is that flimsy characterization and poor acting strips us of any feeling towards the suffering friends. Hard as it is, the film achieves the opposite of resonance. The lack of conviction in the story distances the audiences from the main protagonists, and you even end up feeling that the four morons deserved what they got. Horrid, isn't that!

A smattering of bawdy humour might elicit a few rough chuckles (the film uses a typical Jat-Hindi inflection that might be hard to get). Indeed, a few scenes might genuinely crack you up; one such pertains to a wizened, old dadi with a flair for funny. But then, gender stereotypes (the clingy girlfriend and the hypersexual gay gigolo) too abound, and you can't help but roll your eyes in disdain.

Jimmy Shergill puts on a menacing act with considerable ease, but that does nothing for F*UGLY. The newbies need acting classes. The moments of awkwardness are painful to watch.

The music is up-tempo with decidedly Haryanvi sounds and flavour, and fits in with the tenor of the film. Yo Yo Honey Singh's track "Yeh fugly fugly" will do the rounds of the nightclubs.

F*UGLY aspires to be a modern-day Rang De Basanti, questioning and awakening, but reads more like a string of disparate headlines bereft of matter or meat. There is only one question that remains to be asked: "Yeh fugly, fugly, kya tha?!!"
Share. Save. Connect.
Tweet
FUGLY SNAPSHOT 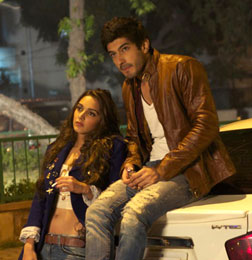 ADVERTISEMENT
This page was tagged for
Fugly hindi movie
Fugly reviews
release date
Jimmy Shergill, Mohit Marwah
theatres list
Follow @fullhyderabad
Follow fullhyd.com on
About Hyderabad
The Hyderabad Community
Improve fullhyd.com
More
Our Other Local Guides
Our other sites
© Copyright 1999-2009 LRR Technologies (Hyderabad), Pvt Ltd. All rights reserved. fullhyd, fullhyderabad, Welcome To The Neighbourhood are trademarks of LRR Technologies (Hyderabad) Pvt Ltd. The textual, graphic, audio and audiovisual material in this site is protected by copyright law. You may not copy, distribute, or use this material except as necessary for your personal, non-commercial use. Any trademarks are the properties of their respective owners. More on Hyderabad, India. Jobs in Hyderabad.