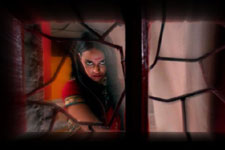 Noha Khan / fullhyd.com
EDITOR RATING
2.0
Performances
Script
Music/Soundtrack
Visuals
3.0
2.0
3.0
3.0
Suggestions
Can watch again
No
Good for kids
No
Good for dates
No
Wait for OTT
No
Sorry for dashing expectations, but Machchli Jal Ki Raani Hai has no connection whatsoever with omnivorous machchlis or the supernatural forces of water or humans morphing into fish. Though the title has you intrigued for a while, this movie is no Grimm's spin on the popular nursery rhyme.

Ugra Pratap Singh (Deepraj Rana) believes in a parallel world that is inhabited by demons and spirits, and considers it his life's mission to battle the paranormal elements. He seeks out seemingly demented folks who have been bewitched, and breaks the iron grasp of spirits over them.

Ironically, his help is sought by a psychiatrist, Dr. Akhilesh Trivedi (Saurabh Dubey), whose daughter-in-law, Ayesha Saxena (Swara Bhaskar), is possessed by an alarmingly potent spirit.

The story then shifts to Dr. Akhilesh's newly-married son Uday Saxena (Bhanu Uday) and his wife Ayesha. They bask in marital bliss and harmony until a momentous upheaval one day when they meet with a car accident. Even though the couple make it out relatively unscathed, another woman is killed instantly, and traumatised by the death, Ayesha starts getting paranoid and depressed.

Uday's hard work at office results in his being made head of the company's factory, at Jabalpur. The couple are delighted by the change of environment. Things seem to get better for a while. Until, that is.

The pot boils over when Ayesha suffers a nervous breakdown and is taken over by the diabolical demons that inhabit her house. Given the unfortunate necessity of a connection with fish, she starts hacking the fish from her aquarium and devours them raw, thorns and all.

All the while, there's the suspicious presence of another family in the neighbourhood, that Ayesha can see even during the day. Ayesha's son becomes friends with the neighbours' seemingly amicable daughter who keeps teaching him the machchli rhyme. We'd rather not spill any beans.

Machchli Jal Ki Rani Hai drowns on multiple fronts, prime among them being the tragic script. There just isn't anything new or different in the story or its narration, and you keep waiting for something really hair-raising to occur. We also have qualms about it always being the so-very-helpless ladies that are targeted by these spirits.

There are a few light-hearted moments involving Uday's droll driver Rajaram (Hemant Pandey), that do more for the movie than its tenser ones. The relationship between Ayesha and Uday is depicted nicely, and even if you are blasé about the rest of the proceedings, you are happy to see them cheerful and fearless.

Of the cast, Swara Bhaskar is the only one who could have had you hook, line and sinker had she been given something better to do. Bhanu Uday doesn't have much of a role but does fine as the doting husband. Hemant Pandey's comic interruptions in the proceeedings are welcome. The sound-effects are OTT and the songs don't seem necessary at all.

Watch Machchli Jal Ki Rani Hai if you want to brag over how fearlessly you could watch a horror movie even if, in reality, a dripping tap freaks you out.
Share. Save. Connect.
Tweet
MACHHLI JAL KI RANI... SNAPSHOT
MACHHLI JAL KI RANI HAI SNAPSHOT 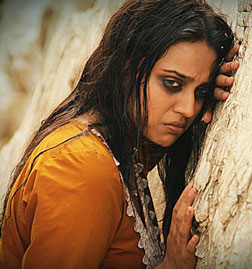 ADVERTISEMENT
This page was tagged for
Machhli Jal Ki Rani Hai hindi movie
Machhli Jal Ki Rani Hai reviews
release date
Swara Bhaskar, Bhanu Uday
theatres list
Follow @fullhyderabad
Follow fullhyd.com on
About Hyderabad
The Hyderabad Community
Improve fullhyd.com
More
Our Other Local Guides
Our other sites
© Copyright 1999-2009 LRR Technologies (Hyderabad), Pvt Ltd. All rights reserved. fullhyd, fullhyderabad, Welcome To The Neighbourhood are trademarks of LRR Technologies (Hyderabad) Pvt Ltd. The textual, graphic, audio and audiovisual material in this site is protected by copyright law. You may not copy, distribute, or use this material except as necessary for your personal, non-commercial use. Any trademarks are the properties of their respective owners. More on Hyderabad, India. Jobs in Hyderabad.