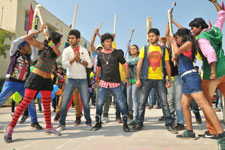 Noha Khan / fullhyd.com
EDITOR RATING
2.0
Performances
Script
Music/Soundtrack
Visuals
3.0
2.0
3.0
2.0
Suggestions
Can watch again
No
Good for kids
No
Good for dates
Yes
Wait to rent it
No
Nenu Naa Friends is a low-budget Happy Days wannabe, following the ups and downs in the oh-so-complicated lives of a group of sprightly teenagers. Sadly, though, it is probably the kind of film that you'd tell your teens not to watch for fear of the influence it may have on them.

The story revolves around Teja, Yadagiri, Rajesh and Srinu, who are friends from school and are in their 2nd year Inter at Hyderabad Junior College. Teja (Sundeep Bollineni) is the protagonist of this tale, a rather decent boy with big dreams and ambitions. He plans to spend his 2nd year studying and making good on his targets.

Yadagiri (Harish) spends all his time and his father's hard-earned money on a rather licentious girl, Maya (Vishnu Priya), who believes that a girl should be allowed to live her life with as much abandon as the boys do.

Rajesh (Sidhant Varma) is the intellectual in the lot, who loyally cleans up his friends' messes and helps them with their stuggles.

Srinu is a village guy who looks down upon all the other people who hail from villages, and squanders his time cracking lewd jokes and trying to land girls in bed. Yes, he's an intermediate student.

Most of the senior girls at the college are lost to the temptations of their age. They advise their impressionable juniors to use what's left of their teenages "wisely" by finding good guys to hang on to. One of the new girls, Sandhya (Anjana), is disgusted by everything her peers have to say, and in her angst one day, kicks an empty can on the road that flies into Teja's car. This causes him to crash into a tree.

He demands a hefty reimbursement amounting to a lakh, for all the damage to his car, from Sandhya. As Sandhya has no means to pay, she is forced to wait on Teja hand and foot. What begins as a master-slave relationship slowly culminates into something more beautiful, until Sandhya's mom intervenes.

Eventually, Yadagiri and Srinu, too, are wrenched back to their senses, but make very different choices that shape their individual futures.

The movie, perhaps taking the wrong lessons from Ee Rojullo's success, has too many double entendres and crude dialogues for one that is aimed at the youth. It wishes to convey an important message regarding the importance of studying in intermediate, but spends way too much time showing how students waste time instead. It meanders for a long time before finding its storyline towards the finish. The ending could have been its saving grace had the rest of it not been so banal.

The cast is a coterie of newcomers who have a long way to go. Sundeep is quite good at his role, but needs some work on his emotions. Anjana needs to let go of the misconcieved notion that talking cute is always cute - it makes you want to cover your ears after a bit. The rest of the cast are okay.

The editing is shoddy - the seamless transition from one frame to another is lost, with parts of the movie looking cut up. The music just serves to add minutes to the movie, and we'd rather not get started on the lyrics. The costumes are bright and colorful, though half-sarees in junior colleges are pushing it.

If some friendly banter, laughs and college romance are what you're expecting from Nenu Naa Friends, be prepared to be disappointed. Watch this one only if you've got something to do for an hour in between.
Share. Save. Connect.
Tweet
NENU NAA FRIENDS SNAPSHOT 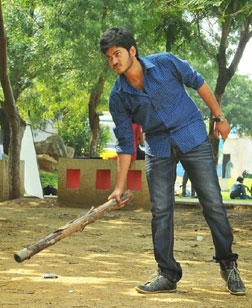 ADVERTISEMENT
This page was tagged for
Nenu Naa Friends telugu movie
Nenu Naa Friends reviews
release date
Sundeep, Siddardh Varma
theatres list
Follow @fullhyderabad
Follow fullhyd.com on
About Hyderabad
The Hyderabad Community
Improve fullhyd.com
More
Our Other Local Guides
Our other sites
© Copyright 1999-2009 LRR Technologies (Hyderabad), Pvt Ltd. All rights reserved. fullhyd, fullhyderabad, Welcome To The Neighbourhood are trademarks of LRR Technologies (Hyderabad) Pvt Ltd. The textual, graphic, audio and audiovisual material in this site is protected by copyright law. You may not copy, distribute, or use this material except as necessary for your personal, non-commercial use. Any trademarks are the properties of their respective owners. More on Hyderabad, India. Jobs in Hyderabad.