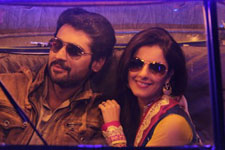 Noha Khan / fullhyd.com
EDITOR RATING
4.0
Performances
Script
Music/Soundtrack
Visuals
4.0
3.0
4.0
5.0
Suggestions
Can watch again
No
Good for kids
No
Good for dates
Yes
Wait to rent it
No
The only similarity that Maine Pyar Kiya bears to the Hindi classic of the same name, is the name. Contrary to the older one, this movie attempts to persuade people to take a more laid-back attitude towards troubles in relationships and rejection. And despite that, the hero ends up getting his girl, notwithstanding the countless troubling circumstances that drive wedges between them.

Naveen (Pradeep Betno) is a software engineer. He has three faithful friends who've remained by his side since childhood. Their main aim in life now is to find people to love.

When Naveen sets eyes on Shalini (Isha Talwar), he instantly falls in love with her. With the help of his friends and an auto-driver, who voluntarily lends Naveen his auto to drive his lady-love all over Hyderabad one night, he manages to win her over. However, Shalini's engagement is scheduled for a month later with another guy, but regardless of that she regales in Naveen's love and attention, even going out with him.

The engagement, however, is not what throws the spanner in the works. Instead, Shalini discovers that Naveen had been her classmate at school, and also someone that she and her family despised with all their hearts, for a major mess-up he had committed back in those days. There is then a blast from the past, which will probably remind you of a few of your own childhood screw-ups, though Naveen's is bigger. Don't get too curious - you'll end up watching the movie.

The first half of Maine Pyar Kiya will have you guffawing all along. The humour also serves a welcome purpose of driving in a few home-truths regarding our deep-seated prejudices against homosexuality and women drinking. However, it comes dangerously close to obscenity at times.

In the second half, the script wages a war against being repetitive but ends up being crippled by another enemy altogether - chaos. When Naveen exclaims "asalemi jaruguthondi ikkada?", it mirrors the questions in the viewers' minds.

There are a few though-provoking dialogues too in the mix, but these are overshadowed by the lack of direction of the script. For example, the relationship between Naveen and Shalini could have been depicted with a little more depth, considering that she would have to abandon her engagement, for Naveen. Also, dispel any ideas that this movie may give you of ways to win over that already-committed girl you know. The moony smiles and relentless stares would only make you a stalker in real life.

Pradeep Betno looks good and has the charisma of an actor, though crying onscreen really isn't his thing. You are left slightly disillusioned when he seems too weak to free himself from his lady boss' grasp, and the only compliment he seems capable of is "hot". Isha Talwar does what Telugu movie heroines do best - wear teeny tiny clothes, and look fab and a tad dumb. The rest of the cast is okay, too.

It is infact another actor altogether, Satya Dev as Bharat, who overshadows the main leads. He plays the role of a grief-stricken and desolate spurned lover with flair. When he sees the lady he loved and almost-died for, after 14 years, we feel the happiness he exudes and with his smile he instantly brightens up the screen.

The cinematography is nice, and some of the costumes make you go "I want, I want, I want". The songs do well to provide the melody that is essential to the mix, but you won't be googling them up. Unfortunately, the editing seems to have been abandoned halfway.

Maine Pyar Kiya is the kind of romance that the Telugu film industry excels at - a light-hearted, predominantly mindless, mushy movie that you would probably go to for want of something to watch with that special someone.
Share. Save. Connect.
Tweet
MAINE PYAR KIYA (TELUGU) SNAPSHOT 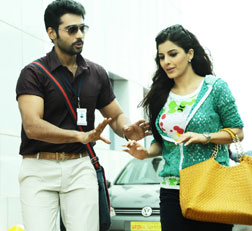 ADVERTISEMENT
This page was tagged for
Maine Pyar Kiya (Telugu) telugu movie
Maine Pyar Kiya (Telugu) reviews
release date
Pradeep, Isha Talwar
theatres list
Follow @fullhyderabad
Follow fullhyd.com on
About Hyderabad
The Hyderabad Community
Improve fullhyd.com
More
Our Other Local Guides
Our other sites
© Copyright 1999-2009 LRR Technologies (Hyderabad), Pvt Ltd. All rights reserved. fullhyd, fullhyderabad, Welcome To The Neighbourhood are trademarks of LRR Technologies (Hyderabad) Pvt Ltd. The textual, graphic, audio and audiovisual material in this site is protected by copyright law. You may not copy, distribute, or use this material except as necessary for your personal, non-commercial use. Any trademarks are the properties of their respective owners. More on Hyderabad, India. Jobs in Hyderabad.