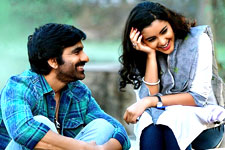 Kritika Deval / fullhyd.com
EDITOR RATING
2.0
Performances
Script
Music/Soundtrack
Visuals
3.0
1.0
3.0
3.0
Suggestions
Can watch again
No
Good for kids
No
Good for dates
No
Wait for OTT
No
The thing to keep in mind about Nela Ticket is that it's a stupid movie that assumes that all the people watching it are also stupid.

Therefore, every fight scene comes with all the appropriate sounds so that the audience won't miss out on each and every bone that is being cracked, and every bit of comedy comes with giant neon-lit instructions to laugh.

Therefore, you have people saying the same thing over and over again in slightly different terms so that we, the people, the so-called masses this film is aimed at, will not forget that the hero is a "jovial" person who will do anything for anyone who calls him family; so that we'll remember that the villain's name is Aditya Bhupathi (Jagapathi Babu) and that he is Evil; so that we'll always keep in mind that our hero's love interest (Malvika Sharma) is a pedda dactaru, even if he only acknowledges this fact while he moons over her like a creep.

Please forgive our vehemence. The hours we spent in that theatre as part of a captive audience were rather trying. This is rather ironic because one of the things Ravi Teja says again and again and yet again is chuttu janam, madhyalo manam. This explanation is obviously the result of having expected to watch a movie, and instead being subjected to what is obviously a terribly executed lecture on all the things that make up a "mass" Telugu flick created by a terrible teacher.

So, basically, Ravi Teja has some weird nickname thing going on that we don't even care about because the only thing that he is throughout the film is the LCM of his cult personality and what his cult expects of him. He comes to Hyderabad from Vizag because he's a total weirdo who people will only put up with for short periods of time. The first thing he does upon entering the city is slap someone. The second thing he does is stalk a pretty girl on the road to the point that the auto he's in crashes into the bike that she's riding. He claims he does this out of lovvu. We've read stories that begin like this in the newspaper. They never end well, least of all for the poor soul who's only apparent crime is trying to go from one place to another while female.

Meanwhile, our Big Bad is the home minister who tells his assistant to set the IAS merit list on fire while a fat, rich man negotiates with him on how much he's willing to pay for a plum posting. Then, the minister turns to the assistant and tells him that the money he gets from this fat, rich person is the real merit list. Right before this scene we see a bunch of IAS hopefuls training hard and then sitting together on the ground to eat. One of them is very poor and only has two idlis. Another one has more food, and feels bad about it. So he shares it with everyone. There's sentimental music in the background. This film is obviously set in a universe where the concept of subtlety does not exist.

Anyway, we keep shifting back and forth from how much of a hero our hero is and how much of a vilain pour vilain is, and in between Malvika does weird things with her face and forgets entirely that the '70s happened and that feminism is a thing, and there are songs, during which we recommend you carry your headphones and favourite playlist. Also, Bramhanandam sits around in alleyways and does weird things with his face, which are however still better than the weird things Malvika does with her face.

At some point during Ravi Teja's attempts at righting all the wrongs in the world around him, he goes head to head with the home minister, and the rest, as they say, is history, if history is both utterly nonsensical and mind-numbingly predictable at the same time.

The movie looks about as shoddy and dated as the plot and the dialogue and the music and the characterisations. Jagapathi Babu looks like a villain we'd probably enjoy in a film that was even slightly better. Ravi Teja is basically all the worst things that people who dislike him hate about him, and only those things. There is not a single word that comes out of his mouth that will not make you cringe.

We could just sit here and whine about our experiences the whole day. The tl:dr version of the review is the very first sentence.
Share. Save. Connect.
Tweet
NELA TICKET SNAPSHOT 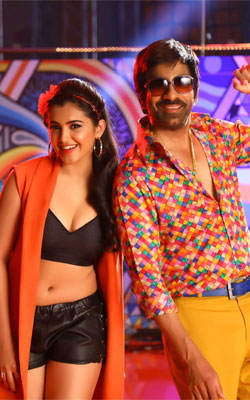 See Nela Ticket full details
NELA TICKET USER REVIEWS
1 - 2 OF 2 COMMENTS
POSITIVE  |  NEGATIVE |  NEWEST  |  OLDEST  |  MOST HELPFUL  |  LEAST HELPFUL
Jyothika on 2nd Jun 2018, 3:37pm | Permalink
Reviewer is trying toooooo hard to write in that fullhyd template. Probably a new one. He or she better discover her or his own style.
Portuguese Man-of-War on 3rd Jun 2018, 12:55pm | Permalink
What is the fullhyd template anyway?
Josh on 2nd Jun 2018, 8:46pm | Permalink
God, no! Kritika Deval is a veteran at this stuff. And I place her work above that of the tremendously popular Deepa Garimella.
Hari on 26th May 2018, 7:09am | Permalink
>>>
This film is obviously set in a universe where the concept of subtlety does not exist.
>>>
Love that line. And I think this is a problem with many of our movies.

ADVERTISEMENT
This page was tagged for
nela ticket movie full details
Nela Ticket telugu movie
Nela Ticket reviews
release date
Ravi Teja, Malavika Sharma
Follow @fullhyderabad
Follow fullhyd.com on
About Hyderabad
The Hyderabad Community
Improve fullhyd.com
More
Our Other Local Guides
Our other sites
© Copyright 1999-2009 LRR Technologies (Hyderabad), Pvt Ltd. All rights reserved. fullhyd, fullhyderabad, Welcome To The Neighbourhood are trademarks of LRR Technologies (Hyderabad) Pvt Ltd. The textual, graphic, audio and audiovisual material in this site is protected by copyright law. You may not copy, distribute, or use this material except as necessary for your personal, non-commercial use. Any trademarks are the properties of their respective owners. More on Hyderabad, India. Jobs in Hyderabad.