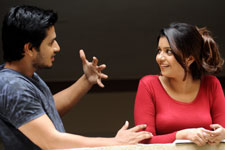 Ravi Kandala / fullhyd.com
EDITOR RATING
6.0
Performances
Script
Music/Soundtrack
Visuals
6.0
6.0
6.0
6.0
Suggestions
Can watch again
Yes
Good for kids
No
Good for dates
No
Wait for OTT
No
Being "inspired" is a good thing. Being inspired and acting upon it is better. Being inspired, acting upon it and crediting your inspiration is the best. Suresh Varma, the director of Swamy Ra Ra, openly claims he lifts from every movie he likes, and lists two other people who do it - Ramgopal Varma and Quentin Tarantino.

Swamy Ra Ra draws heavily from Delhi Belly and Kshana Kshanam, and has action and shots inspired from all Tarantino movies. The result is a slick product that has a run time of little over two hours, thanks largely to a few hundred slo-mo shots that the director includes.

The film's plot is about an idol that is stolen from the Anantha Padmanabha Swamy temple in Kerala. The idol changes several hands, and perchance lands in the hands of Surya (Nikhil), a small-time pickpocket, and his cohorts.

Surya and his gang sell it off to Salarjung Shankar (Jeeva) for a paltry sum. A criminal, Durga Prasad (Ravi Babu), is also after the idol.

Durga Prasad kidnaps Swathi, and Surya is now forced to retrieve the idol, which that has passed into the hands of a couple of Nigerians. This plot and a few other crazy subplots constitute the story of Swamy Ra Ra.

As confusing as it sounds, Swamy Ra Ra is narrated with utmost clarity. The film has several subplots, all of which are brought to a good conclusion. The screenplay is tightly knit, and the story is interestingly narrated. The way the film takes off with a seemingly unrelated incident that is then cleverly woven into the film at a crucial time shows that the director knew what he was doing and was in complete command of the script he wrote.

The film is well-shot, and the Hyderabad that all of us know is shown wonderfully - from the crowded by-lanes of the Old City to the multi-storied edifices of the Financial District, the city provides a great backdrop.

The songs and background score by Sunny MR have a new ring to them. The songs also play out nicely in the background and help take the story forward leaving us with little to complain.

Nikhil goes for a makeover, and moves away from the loud mass characters that he has had little success with since Happy Days. He does well in a subdued character. He does look too sophisticated to be a pickpocket, but the director probably wanted to convey the fact that pickpockets need not look any different from the rest of us.

Swathi is, well, Swathi. She does little different from what she has done earlier. Ravi Babu, Jeeva and the other supporting cast, including Pooja Ramachandran, Chanti and the Jogi brothers are all good fun.

The only flaws of the film are its slightly leisurely pacing that makes the two hours seem much longer, and the director's pre-occupation with style, which contributes to a few scenes being stretched beyond belief. The beautiful chase sequence from Bejoy Nambiar's Shaitan is copied in the film, but it is not set against an eternal classic like Khoya Khoya Chand, and just passes muster.

Swamy Ra Ra is a decent one-time watch for its fresh approach to an inspired story, some cool visuals and a peppy score. So, if you are done seeing the original Tarantino flick, give this inspired piece of cinema a chance.
Share. Save. Connect.
Tweet
SWAMY RA RA SNAPSHOT 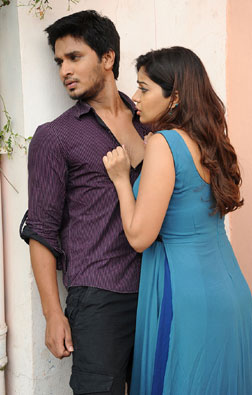 ADVERTISEMENT
This page was tagged for
Swamy Ra Ra telugu movie
Swamy Ra Ra reviews
release date
Nikhil, Swathi
theatres list
Follow @fullhyderabad
Follow fullhyd.com on
About Hyderabad
The Hyderabad Community
Improve fullhyd.com
More
Our Other Local Guides
Our other sites
© Copyright 1999-2009 LRR Technologies (Hyderabad), Pvt Ltd. All rights reserved. fullhyd, fullhyderabad, Welcome To The Neighbourhood are trademarks of LRR Technologies (Hyderabad) Pvt Ltd. The textual, graphic, audio and audiovisual material in this site is protected by copyright law. You may not copy, distribute, or use this material except as necessary for your personal, non-commercial use. Any trademarks are the properties of their respective owners. More on Hyderabad, India. Jobs in Hyderabad.