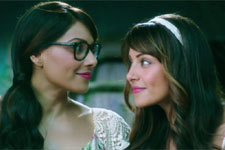 Nupur Barua / fullhyd.com
EDITOR RATING
4.0
Performances
Script
Music/Soundtrack
Visuals
5.0
3.0
5.0
6.0
Suggestions
Can watch again
No
Good for kids
No
Good for dates
Yes
Wait for OTT
Yes
Alone has been in the news for a while, for reasons that have nothing to do with the making of the film itself. It is rumoured that the lead actor, whose debut this is, has broken up with his second wife because of his off-screen alliance with the lead actress. Many people will then be curious to see the chemistry between the lead pair, to figure out if the gossip holds any merit. However, beyond that, there is nothing much that will appeal to movie buffs in this one - not even the special effects, after you watch the trailers.

Sanjana (Bipasha Basu) is a bored housewife. She is married to Kabir (Karan Singh Grover), who works hard to maintain the lifestyle that they have chosen to lead away from their native state, Kerala. Kabir and Sanjana have known each other forever, since childhood, and they understand each other perfectly. They have been in love since adolescence, too. Yet, Sanjana is unhappy for various reasons, the foremost being the fact that Kabir has no time for her.

Sanjana's mother (Neena Gupta) is unwell. With extreme reluctance, the couple return to Kerala. Which is when the memories come flooding back. You see, theirs was not a simple story of childhood sweethearts getting married. Sanjana had a twin sister once, named Anjana (Bipasha Basu). She was also in love with Kabir, but he chose Sanjana. To be with Kabir, Sanjana opted for a surgery, and this is where it gets complicated.

Yes, Sanjana and Anjana were conjoined twins. Kabir has always been their best friend and protector. It was not an easy life, but they managed. When Sanjana decided to take her relationship with Kabir further, she could hardly drag her twin sister along, and so opted for a surgery that would give the twins separate bodies instead of a shared one. Unfortunately, Anjana died after the surgery.

Now that the couple are back in Kerala, strange things happen. Anjana haunts Sanjana, with intention to harm as far as Sanjana knows. As for Kabir, he is at first sceptical, of course. He thinks, and rightly so, that this is a figment of his wife's guilty mind - the twins were close, and the death of one was leading to the other to blame herself for it. Slowly, however, he begins to wonder about the possibilities of a spirit in the vicinity. In the meantime, Anjana decides to possess Sanjana's body and seduce Kabir.

Based on a Thai movie of the same name, Alone is not a great horror story. A ghost wants to avenge her death and fulfil her pre-death urges, and therefore enters a human body. In this case, that body belongs to her sister. Once the spirit is in the body, there is nothing much to look forward to, unless you are really interested in steamy scenes and bipolar behaviour. There is no suspense, no horror, and definitely no mystery. We have seen too many movies along similar lines to gasp at the novelty of it all. A horny ghost may seem like a good idea for a script, but actually writing it out requires some creativity, and that is sadly lacking here.

Given that it is a horror movie, expect the usual sounds of creaking floors and doors, of banging utensils, and of the piano being played in the middle of the night. Bhushan Patel seems comfortable in this genre, but he gets complacent, and at no point does he offer something that you have not already seen before. Even the dialogue delivery is staid and dull. The screenplay lacks drama, a prerequisite for a horror film, and ends up being a montage of scenes that defy logic and structure.

Bipasha Basu is the queen of horror, and all she has to do is look hot. She manages that very well, even as two different characters. What is lacking is some maturity in acting. Her ability to express is limited to a few grimaces, gasps, smiles and sighs. Yet, she is hot. Karan Singh Grover competes with her for hotness, and his acting, too, is limited to a few smouldering glares. His expressions make him look less intelligent than his character probably should be, and his bewildered reactions to the circumstances place this movie dangerously close to the genre of comedy. Neena Gupta is not required to do much, so she just looks bored.

Kerala is the perfect setting for a horror film, and the production design tries to add some surrealism to the setting. The costumes are rather out of place, though. What this movie should have been all about is the VFX, but those, too, are quite disappointing. The cinematographer tries his best to give the film the right lighting to make it spooky, and the odd angles to instill fear, but the story lets him down. The music is decent, but average. The editing is effective, in that it manages to disconcert you every now and then. In fact, the most structured part of the movie is the editing, with the right angles and the right music at the right time.

Should you watch Alone? Maybe not, unless the lead pair's chemistry is all that you are interested in. That aspect does not disappoint, and there is enough steam here and there, but it all looks rather choreographed (as opposed to a natural interaction between two seemingly hot people). That may get a bit dull, too, but then again, there is nothing else in the film that is worth spending money on. If you are really curious about the story, watch the Thai original first.
Share. Save. Connect.
Tweet
ALONE SNAPSHOT 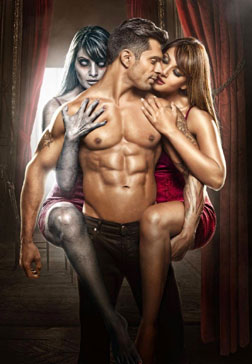 ADVERTISEMENT
This page was tagged for
Alone hindi movie
Alone reviews
release date
Karan Singh Grover, Bipasha Basu
theatres list
Follow @fullhyderabad
Follow fullhyd.com on
About Hyderabad
The Hyderabad Community
Improve fullhyd.com
More
Our Other Local Guides
Our other sites
© Copyright 1999-2009 LRR Technologies (Hyderabad), Pvt Ltd. All rights reserved. fullhyd, fullhyderabad, Welcome To The Neighbourhood are trademarks of LRR Technologies (Hyderabad) Pvt Ltd. The textual, graphic, audio and audiovisual material in this site is protected by copyright law. You may not copy, distribute, or use this material except as necessary for your personal, non-commercial use. Any trademarks are the properties of their respective owners. More on Hyderabad, India. Jobs in Hyderabad.