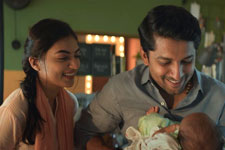 T J Reddy / fullhyd.com
EDITOR RATING
7.0
Performances
Script
Music/Soundtrack
Visuals
9.0
7.0
6.0
8.0
Suggestions
Can watch again
Yes
Good for kids
Yes
Good for dates
Yes
Wait for OTT
No
I have a simple scale to grade a cinematic romance. It does not follow the well-worn A to F or 1 to 10. It goes like this:

1. If I like neither of the romantic leads: BAD

2. If I like one of the romantic leads: MEH

4. If I like one of them enough to have thoughts of dating them: GOOD

5. If I like both of them enough to agree that they belong with each other and not me: GREAT

In one form or the other, one could categorize all romances into these five groups. So which of these groups finds Ante Sundaraniki in them?

Written and directed by Vivek Athreya, Ante Sundaraniki follows the life and times of Sundar (Nani) and Leela (Nazriya Nazim). Childhood friends with eccentric parents, Sundar and Leela grow up to be very different people with one commonality: they like each other. The lead duo's families and personal fears and insecurities act towards keeping them apart. Bringing them together in a neat two-hour runtime should have been the filmmakers' assignment. However, this film runs for nearly three hours. What does director Vivek Athreya have in his arsenal to justify this runtime? Let's dig in.

The primary strength of Ante Sundaraniki isn't its star cast but its script. We've seen those fine actors come off as insufferable bores in duds before, but every one of them shines owing to the power of the material. The movie takes time to introduce us to its characters, their motivations, and the worlds they inhabit. The worlds the film painstakingly puts together help us connect to its characters and their mindsets.

For example, Sundar's father chooses to stay in a smaller ancestral home as it keeps him sticking to traditions while keeping away new ideas. But this visual framework also illustrates the claustrophobic environment in which Sundar lives. It informs his character trait of lying his way through life as a window to the world for which he yearns. When contrasted with the presentation of Leela and her family, we're privy to Sundar's attraction to her.

Leela joins Sweccha (from Vivek Athreya's Mental Madhilo) as one of the most refreshing female leads in a mainstream Telugu film. Simple character moments add likeability, relatability and sensibility to her. Leela doesn't come off as a manic-pixie-dream-girl; she comes off as a human being, flaws and all.

As you can see, I like both Sundar and Leela as individuals. But, the film's intermission leads our duo towards some tough choices. At that pivotal point, a character asks Leela, "Is he worth everything you are going to put yourself through?" I watched the second half patiently to see if the movie would answer its question, and I couldn't find that answer.

In the second half, the film's tempo never goes down. Characters keep finding themselves in one comedic set piece after another, and the heartfelt emotional arc is genuinely surprising, but the question remains, "Is he worth all this?" The movie never gave me a satisfying answer.

A la Mental Madhilo, the male lead is lovable from an audience's perspective but is not so from a female lead's POV. A talented performer saves the character from bearing the brunt of a billion questions from a discerning audience member. It is impressive to see Nani oscillate from Tuck Jagadish to Jersey to Shyam Singha Roy to Ante Sundaraniki without losing a beat. His charm, likability and willingness to be the butt of the joke covers up for the script's fatal flaw. He fits right into a middle-class home and never once looks out of place in an airplane, a bus, a Kinetic Honda or even a Ladybird bicycle. A true MCA (Middle-Class Abbayi) if there ever was one.

Matching him pound-for-pound is Nazriya Nazim. In her Telugu debut, Nazriya embodies Leela with multiple dollops of grace and charm. Contrary to what an "alpha male" YouTube channel will tell you, Nazriya makes Leela a human being to be empathized with, and not a trophy to be won. Leela's actions, good and bad, have psychological reasons behind them. Nazriya's performance bridges the gap between the page and screen while adding subtle nuances to an already fully formed character.

Powering these magnetic performances is some excellent cinematography by Niketh Bommi. The film's visual grammar is never sparse. It is brimming with visual vocabulary in every frame, and is all the better for doing so. The movie's staging and editing of everyday conversations are sublime. Nowhere is a listless shot-reverse-shot to be found. The camerawork changes angles and lighting cues, moves the set itself, and fuses the art direction into its visual framework so well that everything complements everything else incredibly well.

Speaking of which, lest we forget, the supporting cast of this movie deserves an appreciation paragraph of their own. Naresh, Rohini, Azhagam Perumal, Nadhiya, Harsha Vardhan and even "30 years" Prudhvi Raj need to be in the conversation for the best on-screen ensemble of the year. Every actor in this ensemble has a spark in their eye and a spring in their step. It is joyous to watch these seasoned actors bring their A-game.

Not quite hitting those high notes is Vivek Sagar's music. While being a romantic comedy, this is a film that needed no song breaks. Each time the movie awkwardly brings a song into its proceedings, you cannot help but feel a sense of dissonance with the movie preceding and succeeding at that moment. This feeling is doubly frustrating as the score for the movie might be some of the best non-bass music in Telugu cinema in a long time.

It is a hairball that comes as a byproduct of our filmmaking superstitions. But unlike the film's characters, the filmmakers don't exorcise themselves from these superstitions.

And with that, I need to slot Ante Sundaraniki into my myopic set of categories. The simple conclusion is: this is a good film which is not great. I enjoyed watching Vivek Athreya stretch himself as a director and test his mettle as a writer. I loved watching Leela, Sundar, and their antics. However, with the film unable to answer the pivotal question it brought up, it finds itself lacking in a crucial place. It leans towards greatness more than average, but with a lot of struggle, it casts a meek shadow on the greats with its feet firmly planted in good. 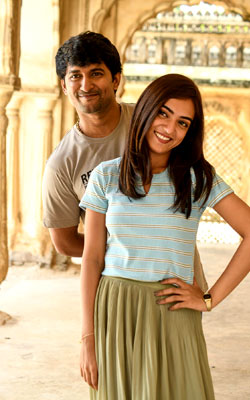 ADVERTISEMENT
This page was tagged for
Ante Sundaraniki telugu movie
Ante Sundaraniki reviews
release date
Nani, Nazriya Nazim
theatres list
Follow @fullhyderabad
Follow fullhyd.com on
About Hyderabad
The Hyderabad Community
Improve fullhyd.com
More
Our Other Local Guides
Our other sites
© Copyright 1999-2009 LRR Technologies (Hyderabad), Pvt Ltd. All rights reserved. fullhyd, fullhyderabad, Welcome To The Neighbourhood are trademarks of LRR Technologies (Hyderabad) Pvt Ltd. The textual, graphic, audio and audiovisual material in this site is protected by copyright law. You may not copy, distribute, or use this material except as necessary for your personal, non-commercial use. Any trademarks are the properties of their respective owners. More on Hyderabad, India. Jobs in Hyderabad.