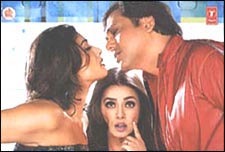 Okay, it's not like Sandwich is without any utility whatsoever. Imagine there’s this girl you want to ask out, and lunch/dinner is too bold a step forward. Here’s a movie you could ask her out to, if you want quality, one-on-one time. 'Cos, even if you look like a Rasputin and talk like a Vajpayee, she’s going to pick watching you over the flick.

Yes, if you needed a movie with ample conversation time throughout, and just a whiff of a hint of a pint of humor, it would be Sandwich. If you thought the movie was a comedy, perish the thought - the movie is a joke.

Not that there aren’t some laughable moments. When Govinda goes "bhanda bachalo", in his inimitable style, he rings some nostalgic bells of the days when ribs used to tickle and sides used to split. The sad part is that this bell isn’t rung too often. And when it is, it’s so loud, that sides split all right... the sides of your eardrums. The comic one-liners sometimes (read mostly) try too hard to be funny, while of the ones that fell flat, you can tell that there just wasn’t any imagination.

In this 3-hour movie, it would be your responsibility to keep your date entertained for two-and-a-half. And here’s all that it puts you through. Sher Singh aka Shekhar (Govinda) wakes up one morning and finds himself married to two women. How was that possible? Well, you just take a Bollywood movie, add a Govinda, and hey presto... anything is possible.

One wife, Sweety (Mahima), he keeps in his village, while he lives with the other one, Nisha (Raveena), in Mumbai. Fast forward through a song and a dance in which both the girls' mothers get to exhibit their motherly love to the newborns and watch them grow up a bit. You’ve become an uncle, and have aged 7 years.

Fed up with the separate existence, Sweety, with mom-in-law (Reema Lagoo) and kid Tony in tow, lands up in Mumbai to pep things up for the movie. So now Shekhar starts to spend half his time at one place and the other half at the other.

Think life is too simple so far? Wait, for it gets more so. The children find there is something amiss, and begin to suspect that their fathers are the same. The suspicion rubs off on the mothers as well, and they begin to ask questions.

Shekhar / Sher Singh do as good a job of dissolving these suspicions as any... after all, they have Govinda to back them up. But it all goes awry when Govinda in the role of Sher Singh meets another Govinda, the fake real husband of Nisha.

The sad part of this comedy is that Govinda does not get too good a script. I mean, no one goes to a Govinda movie to dwelve on the story. It’s more like gimme my slapsticks, and I’m outta here. More of his one-liners fall flat on their faces rather than not. That said, there is surely a lot of action left in the man.

Raveena plays an overtly suspicious wife/lover, a role she is not natural in. However, she can carry off some bits of comedy well, and manages to do so. Mahima plays a gharelu Sweety, who has to quickly adapt to modernity in the city, yet keep the rural outlook. Her role does not seem to trouble her acting skills too much, and she is probably one of the plus points of the film.

The acting of the other sidekicks and villains is up to the low standards set by the script. Had the one-liners been more imaginative, the medley could have been thoroughly enjoyable. As it stands, the movie seems to have fallen as flat as most of its one-liners have.
Share. Save. Connect.
Tweet
SANDWICH SNAPSHOT

ADVERTISEMENT
This page was tagged for
the sandwich hindi movie
hindi move sandwich
sandwich hindi movie reviews
Sandwich hindi movie
sandwich hindi full movie
Follow @fullhyderabad
Follow fullhyd.com on
About Hyderabad
The Hyderabad Community
Improve fullhyd.com
More
Our Other Local Guides
Our other sites
© Copyright 1999-2009 LRR Technologies (Hyderabad), Pvt Ltd. All rights reserved. fullhyd, fullhyderabad, Welcome To The Neighbourhood are trademarks of LRR Technologies (Hyderabad) Pvt Ltd. The textual, graphic, audio and audiovisual material in this site is protected by copyright law. You may not copy, distribute, or use this material except as necessary for your personal, non-commercial use. Any trademarks are the properties of their respective owners. More on Hyderabad, India. Jobs in Hyderabad.