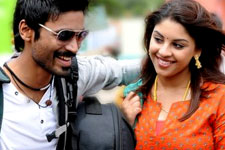 T J Reddy / fullhyd.com
EDITOR RATING
7.5
Performances
Script
Music/Soundtrack
Visuals
8.0
7.0
7.0
6.0
Suggestions
Can watch again
Yes
Good for kids
No
Good for dates
No
Wait to rent it
No
There is an unmissable lack of polish about the way Selva Raghavan (Sri Raghava) writes and stages his romances. For one, they are better than his high-budget, ambitious yet misfiring sci-fi epics. Secondly, they carry a sense of ominous doom lurking behind the initially friction-laden yet ultimately happy lead couple. These were on full display with his previous projects 7G Brundhavan Colony and Aadavari Matalaku Arthale Verule.

There is a keen sense of self hidden beneath the veneer of a familiar story that drives both those movies. Neither the men nor the women are anything close to perfect nor are they cookie-cutter in presentation. More often than not, they are morally reprehensible and could be recast as the Mark Lewises (Peeping Tom) or David Sumners (Straw Dogs) of the world, with a few tweaks in editing, and you wouldn't bat an eye.

There is a method to their obsessions, reckless abandon about their actions and relentlessness about their movements which are forever fuelled by unsatisfied and disapproving fathers / father figures. The tropes are all consistent but the settings vary each time. From a genius mechanic to a genius unemployed bachelor to a genius photographer (this movie) who all have anger issues and stalker-ish tendencies, they are all extensions of the same trope, and allude to being extensions of the writer/director himself.

Karthik (Dhanush) is a multi-lingual, smarter-than-God, aspiring wildlife photographer with a severe case of d***headedness whose genius is recognised by everyone but the one man who can actually be of some tangible use to him and his career, a dismissive figurative father figure, award-winning ace photographer Madesh Krishnaswamy (Ravi Prakash). So trope numbers one and two fulfilled.

Post this mark, Karthik and the audience are introduced to his friend Sundar's prospective bride, Yamini (Richa Gangopadhay). What begins as mutual dislike owing to Karthik's erratic behaviour and Yamini's insistence on being a dolled up and disgusted Barbie, slowly evolves into a deeper bond between the two as they figuratively and mutually peel off their rough and glossy exteriors (respectively), culminating in a very literal peeling off of Yamini's clothing in a scene with lines which have the distinct air of the director's flair. Trope number 3 achieved, and you have unlocked a Selva Raghavan movie.

Powered by Karthik's near sociopathic levels of singular focus towards achieving his goals and the triangular love story unfolding between Karthik, Yamini and Sundar, Mr Karthik follows two parallel plot lines which illustrate a much more dark, macabre, introspective, funny and triumphant side of our heroes than we see on the big screen.

I say this because Mr Karthik is a film that well and truly understands the most common yet most botched writing element, THE HERO'S JOURNEY. While its sensibilities might not cater to all tastes, and while a scene at the two-hour mark might incur the wrath of some of the audience, the film is a mostly unflinching look at the life of any one of us with a dream and the price only some of us might have to pay to achieve it. While that description seems clichéd, the movie also ventures into talking about the price our near and dear ones pay in order to help us realize a dream only we can see. These are but the primary themes, and the layering on the film aides in repeat viewings even if the pacing might suggest otherwise.

Very few actors in the modern age are as adventurous with their roles and projects as Dhanush. A man who is willing to take up a role that requires him to be slapped by his lady counterpart twice and bark like a dog while roaming around on all fours just in the hope of landing a job as an assistant to a photographer commands glowing words of praise.

The cast surrounding Dhanush, while mostly one-note, dutifully fulfil their roles which include a band of friends and a few annoyed neighbours. Selva Raghavan's dive into his latent emotions comes in the form of Richa Gangopadhay's Yamini. While she is not quite up to matching Dhanush's calibre, she makes the most important sequences of character development land with a mix of love, warmth and unspeakable heartache. I reiterate - some of this movie is genuinely hard to watch.

Curiously, though, for a film about photography, the movie sorely lacks any identity in the visual department. Make no mistake, the film is competently shot, lit and coloured - yet, barring a scene with Dhanush joyously taking pictures of a ripe old woman which elicits the reaction "look at how beautiful my wife is" from her husband, the movie seems like a graduate of the Zack Snyder School Of Acid Grey Hues. Not to mention that overbearing sequence of a leaf landing on Dhanush's head.

While the movie's visual grammar does not do its themes justice, the score is as unforgiving as the story itself. A one-sentence log line of the film would read like the log line of most others but with some simple caveat. A listless youth achieves his dreams (clichéd, right?) but at a great personal cost (not so clichéd now). It is the Selva Raghavan template, but like with his contemporaries Bala, Anurag Kashyap or Mysskin, I would much rather watch them chronicling the lives of those underreported forgotten characters earning their wins with immense sacrifice, hard work and focus instead of watching a movie with an overpowered good guy who is given walkovers in every aspect of life and who I'm expected to cheer for because he is a star.
Share. Save. Connect.
Tweet
MR. KARTHIK SNAPSHOT 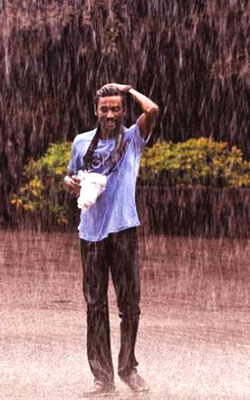 ADVERTISEMENT
This page was tagged for
mr.karthik movie review 123telugu
mr karthik review 123telugu
mr karthik movie review
mr karthik telugu movies review
mr karthik movie review 123telugu
Follow @fullhyderabad
Follow fullhyd.com on
About Hyderabad
The Hyderabad Community
Improve fullhyd.com
More
Our Other Local Guides
Our other sites
© Copyright 1999-2009 LRR Technologies (Hyderabad), Pvt Ltd. All rights reserved. fullhyd, fullhyderabad, Welcome To The Neighbourhood are trademarks of LRR Technologies (Hyderabad) Pvt Ltd. The textual, graphic, audio and audiovisual material in this site is protected by copyright law. You may not copy, distribute, or use this material except as necessary for your personal, non-commercial use. Any trademarks are the properties of their respective owners. More on Hyderabad, India. Jobs in Hyderabad.