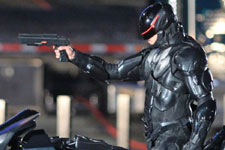 Swayamsrestha Kar / fullhyd.com
EDITOR RATING
5.5
Performances
Script
Music/Soundtrack
Visuals
6.0
5.0
5.0
6.0
Suggestions
Can watch again
No
Good for kids
No
Good for dates
No
Wait to rent it
Yes
The machine cracks down to reveal a jumble of indecipherable data clusters, each interlinked to the other rather intricately. These highly complex data modules are encrypted separately in the core processor of each machine. Each machine receives data chunks through disparately circuited input pathways, each processor uses a different set of algorithms (which within themselves, keep altering throughout the machine's functional life) to compile these data nuggets, and thus, the output given by each machine is always distinctive from its counterpart of the same external build and structure, even if the same data is fed into each of these machines.

We basically just tried to describe the average human being to you.

Some people believe that God (or at least a god somewhere) built man as a reflection of his own image. There is something inherently vain about this assumption, which shows that we like to imagine ourselves as the most supreme of all creations - something within which the maker would decide to leave his likeness to indicate that this... this is the best he will ever make.

Films like Robocop and Terminator tell us that we have also inherited the Maker's penchant for narcissism. We build robots that ("who"?) look like us, and every day, we are trying harder to inscribe into the mechanical minds of these machines, the ways in which we think and perceive our world.

Computational Linguists are obsessing over how to equip artificial intelligence with the knack for language learning, and technologists are frenziedly trying to code the most flexible of programs for the newest state-of-the-art android.

It seems that we want to create intelligent life outside of the natural cycle of birth-reproduction-death, something, or rather, an army of somethings that will outlive the whole of humanity. If we can't thwart the essential weaknesses of our kind, we might as well aspire to conceive and assemble something that can.

The original Robocop movie (1987) was a startlingly intelligent commentary on this intrinsic human drive to instil something durable out of an innately nihilistic existence. It was pokerfaced satire that hit on some hard truths - the appalling shallowness of the corporate culture, the monolithic indomitability of military capitalism, and our increasingly indifferent acceptance of both of the above.

The half-man and half-robot hybrid was a symbol of our transition from pre-civilization free-thinking animals to post-civilization human beings who can only function within the strait-jacket of a system - much like a machine which can only work if it is provided with the right instructions.

The present Robocop movie is a flimsy shade of the original - of that we are absolutely sure - but it still manages to force us to ponder over what it feels like to be a machine which has the choice to occasionally think and act for itself.

The story is straightforward. Omnicorp is an arms manufacturing multi-million-dollars industry whose robots and combat drones are used by the American government in various war zones outside the country, but a Parliamentary act which prohibits the use of robots in the state's own security force, prevents Omnicorp from tapping into a much bigger market back home. The senator who repeatedly enforces this bill emphasizes that a robot is, at the end of the day, a machine and thus, feels no emotions, and thereby, is not concerned with humane ethics.

In reply to this, Omnicorp's chief Raymond Sellers (Michael Keaton) devises an idea of installing a human within the highly-sophisticated synthetic exoskeleton of a robot, in effect, providing the machine with a moral compass. So, when detective Alex Murphy (Joel Kinnaman) is critically injured by a mob boss he has been pursuing for some time, the corporation's scientific head, Dr. Norton (Gary Oldman), fits what can only be described as Murphy's central nervous system - brain and spinal cord - with the exterior of a robot to create the Robocop.

The film then follows the cyborg as he gets used to his new life, and how he struggles to tame the man within the machine, in the hope of gaining equilibrium of some sort.

This concept of a human's identity and essential "humanness" residing only within its brain is manifested in fits and bursts throughout the narrative. In one hauntingly intense scene, the doctor reveals, by disassembling Murphy's robotic limbs piece by piece, that only his face, backbone and lungs - all encased in synthetic "containers" - remain of his original body. In another, the doctor fiddles with the "tinman's" emotional state by severely reducing the dopamine secretions in the latter's brain, rendering him acutely emotionless, and thereby, unsusceptible to fear, stress or anger.

Unfortunately, these brilliant parts are too few, and too far-spaced to hold the rest of the movie together. Though the movie seems to be trying to satirise America's increasing megalomania, the screenplay doesn't churn up enough fodder to accomplish this. The right-wing T.V. presenter Pat Novak (Samuel Jackson) is the character through which the movie mouths most of its commentary on the American psyche (the phrase "imperialist bully" appears in one of Novak's inspired prejudice-filled rants), but even this character has not been convincingly sketched out.

There is a pervasive action-flick air around the film, which dilutes a potentially hard-hitting premise. The cinematography feels jaded, and the editing has rendered the narrative disjointed and cluttered.

Joel Kinnaman is not expressive enough to play the human part convincingly, while he plays the robot part quite confidently. This doesn't mean that he is wooden though. Even playing deadpan machine requires a certain proficiency in your craft. But it seems as if his talent has been sorely underutilised as Murphy's personal transformation is not given enough time.

Michael Keaton plays the greedy entrepreneur quite well, but it is Gary Oldman who shines as the morally torn Dr. Norton, but not bright enough to rescue the film from mediocrity.

All in all, this Robocop feels a lot more soulless than its predecessor.
Share. Save. Connect.
Tweet
ROBOCOP SNAPSHOT 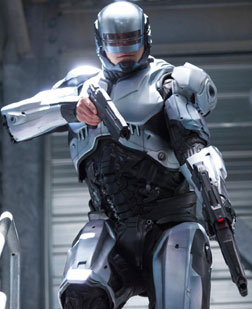 ADVERTISEMENT
This page was tagged for
Robocop english movie
Robocop reviews
release date
Joel Kinnaman, Gary Oldman
theatres list
Follow @fullhyderabad
Follow fullhyd.com on
About Hyderabad
The Hyderabad Community
Improve fullhyd.com
More
Our Other Local Guides
Our other sites
© Copyright 1999-2009 LRR Technologies (Hyderabad), Pvt Ltd. All rights reserved. fullhyd, fullhyderabad, Welcome To The Neighbourhood are trademarks of LRR Technologies (Hyderabad) Pvt Ltd. The textual, graphic, audio and audiovisual material in this site is protected by copyright law. You may not copy, distribute, or use this material except as necessary for your personal, non-commercial use. Any trademarks are the properties of their respective owners. More on Hyderabad, India. Jobs in Hyderabad.