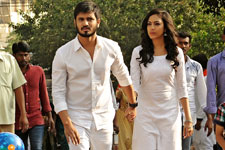 Josh / fullhyd.com
EDITOR RATING
7.0
Performances
Script
Music/Soundtrack
Visuals
7.0
6.0
8.0
9.0
Suggestions
Can watch again
No
Good for kids
Yes
Good for dates
Yes
Wait for OTT
No
How many weddings have you been to and in how many of them do you actually feel any kind of involvement? There are deep and profound vows but neither the bride nor the groom understands them (sometimes we wonder if even the priest has a clue). They look to the sky, and even on the cloudiest of days they claim to have seen the Arundhati nakshatram. And regardless of how well you wish for the couple, you usually get really bored by the time the two hundred and fifty second photograph is posed for. Weddings are dreary affairs mostly.

That's also, incidentally, how Telugu films are. They are often equally elaborate and expensive rituals of the hero, heroine, villains, comedians, fights, songs and completely unfelt drama. Week in and week out we watch these rituals without feeling a blip of human emotion to the point that we forget that the function of art is to make us feel. Just the way we forget that the function of a wedding is to make us witness the union of two lives and wish them the best.

Seen this way, Keshava is your average Telugu film which fails to make any human impact. It's a revenge drama where a young Keshava (Nikhil Siddharth) witnesses his parents' death in an accident (which also paralyses his sister) and he grows up to pursue the perpetrators of this crime and murder them in sequence despite being hounded by a top cop (Isha Koppikar). Add to this the sub-plot of Satya (Ritu Verma) who identifies Keshava as her childhood friend and is actively trying to probe into his mysterious life.

Trouble is, Keshava doesn't sell the need for revenge. Despite their ill deeds, at no point do you feel any visceral impulse to see the baddies lynched. Despite Keshava's heavy lines on his life being a pain, he appears rather emotionless. Part of the problem is his character is given a heart disorder which demands that he always be calm. So, loaded emoting goes out of the window. And the other part of the problem is Nikhil Siddharth doesn't seem capable of doing intense or brooding. In effect, both the good and the bad don't move you.

But that's not a damning verdict yet. This is where the wedding simile checks out. The most unfelt and ritualistic wedding can also be redeemed if one thing is sorted - why, we're talking about the food, of course. There's redemption to be found in the bendakaya vepudus and mamidikaya pappus, and if you happen to be a special invitee in a Telangana wedding, the envy is fit for royalty. And absolutely nothing tops a wedding feast where the family personally manages the cooking department.

The parallel here is the style in filmmaking. Sudheer Varma is a keen director. He isn't out there to tick some checklist and make some money. He has appreciation for the notion that the frame is a filmmaker's playground. Together with cinematographer Diwakar Mani's fluency with light, he pulls off some splendid visuals. There are coconuts breaking the foreground as Keshava follows his prey. There are snail shells stuck to tree bark. Large shadow silhouettes on dark nights. Red blood pitter-pattering in the rain. Keshava is, visually, a delicious film.

One very pertinent comment that has to be made here is that Keshava is almost entirely shot in the Telugu-speaking states. And the film looks just spectacular sometimes. We're really hoping there's at least one filmmaker out there jotting this down into his/her notebook - "Can shoot at low budget in nearby locations and still make film look good. No need to buy air tickets for 45 people."

Sudheer Varma's control on his craft continues to be evident with the grip he has on almost all departments. While not exactly phenomenal, the editing has a gratifying tautness in key sequences. Also, this is another smashing album by Sunny M R (with one song by Mikey McCleary) with the background score by Prashant Pillai being even better.

And the acting is mostly free of bloat. We already mentioned that the emphasis on subdued emoting does not work for Nikhil, but the rest of the cast manages well. Isha Koppikar and Ritu Varma perform but suffer from out-of-place dubbing (Varma's accent is out of place whereas Koppikar appears to be a ventriloquist). Priyadarshi Pulikonda and Vennela Kishore remind us that humour isn't necessarily about exaggerated and loud behaviour. They're both funny and, like, we said, free of bloat.

However, the best performance comes from the villain. There's a certain natural flow of physical, verbal and mental communication that can be pulled off when the actor knows not just the craft but the language as well. The antagonist of Keshava has barely a scene where he speaks anything substantial, but that happens to be the only scene in the entire film where you get convinced of someone's motives.

Sudheer Varma's film could have meant just another instance of weekly drudgery. The film is certainly a failure if you scrutinise it with the story and emotional connect on the stage. However, if you move from the stage to the dining hall and focus on the earthy reds, the aerial shots, the local accents, the water bodies, the pacing and other such deliberately crafted labours of love, Keshava has a lot to give you in its two hours. Storywise, it is very much an empty ritual. However, you'll appreciate it much more if cook up an appetite for some juicy nuggets of passionate filmmaking.
Share. Save. Connect.
Tweet
KESHAVA SNAPSHOT 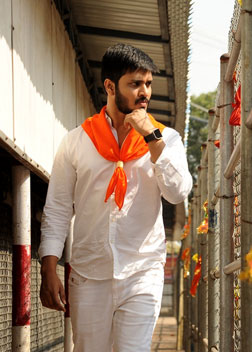 See Keshava full details
KESHAVA USER REVIEWS
1 - 4 OF 4 COMMENTS
POSITIVE  |  NEGATIVE |  NEWEST  |  OLDEST  |  MOST HELPFUL  |  LEAST HELPFUL
Josh on 21st May 2017, 10:32am | Permalink
@ Hari - A few months after I learnt that a body projected at an angle with the vertical necessarily takes a parabolic path, I watched Rajinikanth jump and move in a horizontally straight line in Chandramukhi (That scene when he has to knock off the poisoned coffee from Prabhu's hands). The geek in me suffered a searing stab in the gut.

But the fan in me pushes on. Chandramukhi is a golden reference for me to understand the psychology of film viewing. It's a non-film on many accounts. Not a single shred of the film feels authentic or real. I'm not talking about just the kites in the sky aligning into a formation of the word "Superstar". I'm talking about basic motivation of characters and their behaviours. Except that Akhilandeswari lady, not a single character garners a sliver of believability.

And yet the film is beloved. Not just by me but by people in general. Therein lies a great lesson to be learnt.

We often point out 'logical loopholes' in films and damn them for these 'flaws'. We think that's what's wrong with the film. But isn't it obvious that the whole thing is a pretense? The phrases 'Make Believe' and 'Willing Suspense Of Disbelief' aren't just fancy terms for scholarly discourse. They are the very crux of how an obviously fake piece of media appears real.

My point then is filmmakers needn't worry about what rules they are flouting as long as they have enough ammo to carry their film
JayZ on 21st May 2017, 1:48pm | Permalink
Many great psychiatrists and psychologists would have turned in their grave after watching chandramukhi
Josh on 21st May 2017, 5:06pm | Permalink
That face reading stuff, I swear.
Swaroop Thotada on 21st May 2017, 7:44pm | Permalink
"My understanding is that each of us expects the film to satisfy us on a basic level. If that satisfaction is high, we willingly forgive any supposed flaws. Likewise, if that satisfaction is not met at all we pick on goofs and rationalise that those are the reasons we don't like the film for. "
Truer words were never spoken, Josh.
Josh on 20th May 2017, 9:19pm | Permalink
Different reviewers, different emphases, Sarma.

It is very likely JNR gets the authenticity right (and I imagine I'd really like it - among my favourite film settings are Vamsi's local communities where characters are just a tad exaggerated versions of people you might find in such places).

However, my point in this review isn't necessarily about authentic detail as much as it's about visual richness. I meant you can shoot your film on a low budget in local areas and still make it look terrific.
JayZ on 20th May 2017, 9:13pm | Permalink
These directors don't seem to understand medicine and don't even try to understand.the thing with adrenaline is.....Being calm while committing a murder does release adrenaline..it does not work like.... u have to be angry to have it released....which does increase the heart rate and cause all sorts of problems( don't wanna get into the medical jargon) and I heard the hero has dextrocardia( heart on the right side)....anyone with such a cardiac anomaly will never be normal..he has all sorts of nasty limb, skull and mental defects....
Josh on 20th May 2017, 9:20pm | Permalink
Completely agree.
JayZ on 21st May 2017, 12:17am | Permalink
I am a doctor Josh Bhai:-P...breaks my heart when I see my subject being destroyed by our movies
Josh on 21st May 2017, 12:25am | Permalink
Think about me. I teach physics for a living :)
Hari on 21st May 2017, 1:23am | Permalink
HA HA HA. You must have virtually died a thousand times by those physics defying stunts in our movies. Feel for you Josh.

-Hari.
Veturi Sarma on 20th May 2017, 8:58pm | Permalink
I think Jayammu Nischayammu Ra managed even better on getting the nativity aspect right, and it is a better film in other areas as well compared to this, except may be the make-up and how bright it actually is. I'm from Kakinada and the office they showed in JNR is as close and as right as it gets...may be they shot in a real govt office and the actors are a riot simply because they know the area, they are the kind of people they portray and they are better actors, yet JNR review hardly mentions those while Keshava despite being substandard and ignorant on all those counts, gets appreciated just for being set up in those places...
LEAVE A COMMENT
fullhyd.com has 700,000+ monthly visits. Tell Hyderabad what you feel about Keshava!
MORE MOVIES
Latest Reviews
Writer Padmabhushan
Michael
Hunt
Pathaan
Waltair Veerayya
more
Veera Simha Reddy
Top Gear
18 Pages
Dhamaka
Connect (Telugu)
Avatar: The Way of Water
Panchathantram
Gurtundha Seetakalam
Violent Night
Matti Kusthi
Contemporary Reviews
Half Girlfriend
Hindi Medium
Pirates of the Caribbean: Sa...
Sachin: A Billion Dreams
Rarandoi Veduka Chudham
more
Wonder Woman (3D)
Baywatch
King Arthur: Legend of the S...
Meri Pyaari Bindu
Sarkar 3
Radha
Guardians of the Galaxy Vol....
Babu Baga Busy
Baahubali 2: The Conclusion ...
Random Reviews
Sri Sai Mahima
!! Satya Bol !!
Sahasa Baaludu Vichitra Koth...
Lahiri Lahiri Lahirilo
Main Aisa Hi Hoon
more
Raasaleela
Kanne Pillalu
Sex And The City
The Ugly Truth
Harry Potter And The Deathly...
The Adventures Of Tintin (3D...
Devaraya
Thor: The Dark World (Telugu...
Hello Guru Prema Kosame
30 Rojullo Preminchadam Ela
SEARCH MOVIES
Dissatisfied with the results? Report a problem or error, or add a listing.
ADVERTISEMENT
SHOUTBOX!
{{todo.name}}
{{todo.date}}
[
ip{{todo.ip}}
]
{{ todo.summary }}... expand »
{{ todo.text }} « collapse
First  |  Prev  |   1   2  3  {{current_page-1}}  {{current_page}}  {{current_page+1}}  {{last_page-2}}  {{last_page-1}}  {{last_page}}   |  Next  |  Last
{{todos[0].name}}

ADVERTISEMENT
This page was tagged for
Keshava telugu movie
Keshava reviews
release date
Nikhil Siddhartha, Isha Koppikar
theatres list
Follow @fullhyderabad
Follow fullhyd.com on
About Hyderabad
The Hyderabad Community
Improve fullhyd.com
More
Our Other Local Guides
Our other sites
© Copyright 1999-2009 LRR Technologies (Hyderabad), Pvt Ltd. All rights reserved. fullhyd, fullhyderabad, Welcome To The Neighbourhood are trademarks of LRR Technologies (Hyderabad) Pvt Ltd. The textual, graphic, audio and audiovisual material in this site is protected by copyright law. You may not copy, distribute, or use this material except as necessary for your personal, non-commercial use. Any trademarks are the properties of their respective owners. More on Hyderabad, India. Jobs in Hyderabad.