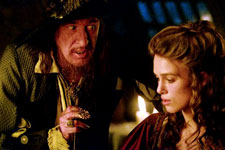 Vaishnavi Kulkarni / fullhyd.com
EDITOR RATING
8.0
Performances
Script
Music/Soundtrack
Visuals
7.0
8.5
8.0
8.5
Suggestions
Can watch again
Yes
Good for kids
Yes
Good for dates
No
Wait for OTT
No
After ten long years of us being lost at sea, pondering over the poignantly heart-breaking conclusion of the trilogy-long romance of Will Turner (Orlando Bloom) and Elizabeth Swann (Keira Knightley) and wondering if that is how their story is doomed to end, Jack Sparrow (Johnny Depp) sails back into our lives with a barrel of rum and a yo-ho-ho to rescue us from our misery.

He had stopped by en route to the Fountain of Youth way back in 2011 (On Stranger Tides), but let's face it, he ended up shipwrecked on that voyage. This time, however, Sparrow is back with a crew of familiar faces: Captain Barbossa (Geoffrey Rush), Gibbs (Kevin McNally) and a few other upstanding young men the esteemed pirate had gone treasure-hunting with.

There's a new Turner on the block, too - young Henry Turner (Brenton Thwaites) refuses to learn from the sins of his father, and believes that the often-intoxicated Jack is the key to stopping said father's slow transition into billions and billions of blue blistering barnacles. Since the throwback to the initial 2003 film (The Curse Of The Black Pearl) is incomplete without the kind of smart and independent young lady that the Turner men have a penchant for falling in love with, Carina Smyth (Kaya Scodelario) steps into Elizabeth's shoes (though she does not walk nearly as well in them).

Much like its predecessors, Pirates Of The Caribbean: Salazar's Revenge (or Dead Men Tell No Tales, if you prefer that mouthful of a title) does not dare to tweak the tried and tested formula - take a young and attractive couple, an object of enormous power, and a cursed villain on the warpath, and cover it all with a layer of Johnny Depp's roguish charm and snarky humour. It's a map that is bound to point Walt Disney Pictures towards plenty of treasure, and it does not lead them astray in this instalment either.

Henry Turner is working aboard a British Royal Navy ship, and is ironically helping the Navy catch pirates. During his travels, he realises they are heading straight into the Devil's Triangle - much like our Bermuda Triangle, ships seldom manage to escape its clutches. Unlike our real-life maritime mystery, the dangers of the Devil's Triangle are attributed to the murderous ghost of the Spanish Captain Salazar (Javier Bardem) and his undead crew of disembodied limbs. Turner's warning falls on surprisingly deaf ears (the name of the area alone seems formidable enough), and he is imprisoned for treason.

Salazar slaughters the crew but spares Turner, bidding him to convey his (Salazar's) regards to his (Salazar's) (im)mortal enemy and the reason for his current predicament, Captain Jack Sparrow. Back on dry land, a drunken Sparrow briefly makes his acquaintance with Carina, an astronomer and horologist who is believed to be a witch courtesy of the archaic, misguided religious notions regarding a woman of science.

As fate would have it, Sparrow, Carina and Turner are united by a common goal - with their band of misfits (aka Jack's dim-witted crew), they set out in search of the Trident of Poseidon, guided by a celestial map. The quest is not all smooth sailing, however; Capitán Salazar is hard on their tail, and Barbossa returns to butt heads with Sparrow after narrowly escaping the wrath of the Spaniard himself.

The movie is funny and entertaining, and doles out a generous helping of nostalgia with plenty of references to past plots. The story progresses at an enjoyable pace and there are few dull moments. However, Jack Sparrow is what fails to live up to the mark in this instalment.

Johnny Depp's Sparrow is rather lacklustre and stale in his antics, and there is a dearth of the sassy and savvy mannerisms and comebacks that have made this pirate so popular. He has moments where you can glimpse the old Jack, but his shoulders can no longer bear the weight of carrying the entire movie ahead like they used to.

Sparrow's usual shenanigans and schemes that are 90% insane and 10% genius are absent, and his spirited persona is watered down by an onslaught of rum - he is in a drunken stupor (not merely amusingly tipsy, either) for a large part of his screen time.

The rest of the cast are adequate in their roles. Thwaites and Scodelario make a cute couple with plenty of bickering and banter, but they lack the intensity and chemistry that marked the romance of Bloom's and Knightley's characters in previous instalments. Individually they deliver what their roles expect from them, but they do little more.

Javier Bardem is an impressive antagonist, with his terrifying expressions and scratchy, unnerving voice, but does not manage to leave a lasting impression. Geoffrey Rush plays his conflicted and unexpectedly emotional (albeit short) part fittingly. He invokes laughter as well as sorrow, and lives up to his own legacy as the gruff and tough old Captain of the Black Pearl.

The film's VFX, 3D effects and CGI are executed exceedingly well, though the movie is excessively dark and murky at times. The swordfights, though few, are well-choreographed. The music is spot on, and the familiar tunes that POTC fans know and love return to take you to the world of pirate legends and lore one more time.

All things considered, Pirates Of The Caribbean: Salazar's Revenge is a film definitely worth a theatre watch. It may be wanting in the charm of the original trio that boarded the Black Pearl, but it makes up for it with interesting backstories, a lot of laughs and a satisfying yet open-ended conclusion. Don't forget to wait for the post-credits scene!
Share. Save. Connect.
Tweet
PIRATES OF THE CARIBBEAN:... SNAPSHOT
PIRATES OF THE CARIBBEAN: SALAZAR'S REVENGE SNAPSHOT 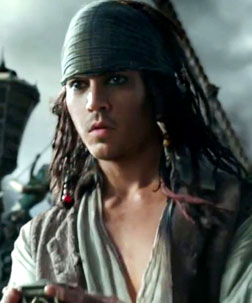 See Pirates of the Caribbean: Salazar's Revenge full details
PIRATES OF THE CARIBBEAN:... USER REVIEWS
PIRATES OF THE CARIBBEAN: SALAZAR'S REVENGE USER REVIEWS
1 - 2 OF 2 COMMENTS
POSITIVE  |  NEGATIVE |  NEWEST  |  OLDEST  |  MOST HELPFUL  |  LEAST HELPFUL
Swaroop Thotada on 30th May 2017, 5:51pm | Permalink
I enjoyed the film but not as much as the Gore Verbinski's balderdash paradise of a trilogy. Verbinski twisted the plot too much till it was beyond sense and comprehension and that's what made those films fun. Critics ground their teeth and puritans ranted how Hollywood blockbusters have become all pulp and no but. But the films appealed to its target audiences: The people who are looking for some mindless distraction.
This sequel is too sober and Jack in it is too sane but managed to blend the idiocy that we look for with something resembling structure.
The visuals are spectacular as usual and the soundtrack is terrific. I go to the pirates films for the atmosphere and my money is not wasted this time
Swaroop Thotada on 30th May 2017, 5:52pm | Permalink
*all pulp and no nut
JayZ on 30th May 2017, 2:16pm | Permalink
I could not focus on the movie when Kaya Scodelerio was on screen....her hotness must be measured in Scofield units
LEAVE A COMMENT
fullhyd.com has 700,000+ monthly visits. Tell Hyderabad what you feel about Pirates of the Caribbean: Salazar's Revenge!
MORE MOVIES
Latest Reviews
Don't Worry Darling
Vikram Vedha
Ponniyin Selvan - 1
Naane Varuvean
Nene Vasthunna
more
Krishna Vrinda Vihari
Saakini Daakini
Where the Crawdads Sing
Everything Everywhere All At...
Aa Ammayi Gurinchi Meeku Che...
Brahmastra: Part One - Shiva
Oke Oka Jeevitham
Brahmastra: Part One - Shiva
Ranga Ranga Vaibhavanga
First Day, First Show
Contemporary Reviews
Sachin: A Billion Dreams
Rarandoi Veduka Chudham
Wonder Woman (3D)
Baywatch
Fashion Designer s/o Ladies ...
more
Dobaara: See Your Evil
Baywatch (Telugu)
Hindi Medium
Half Girlfriend
Keshava
King Arthur: Legend of the S...
Meri Pyaari Bindu
Sarkar 3
Radha
Random Reviews
Bhalevaadivi Baasu
Mummy - 2 (Telugu)
Bend It Like Beckham
Footpath
Page 3
more
Julie
Manasichhanu
The Happening
Wanted
Family Pack
The Adventures Of Tintin
The Hobbit: An Unexpected Jo...
Goliyon Ki Rasleela Ram-Leel...
Badhaai Ho
G-Zombie
SEARCH MOVIES
Dissatisfied with the results? Report a problem or error, or add a listing.
ADVERTISEMENT
SHOUTBOX!
{{todo.name}}
{{todo.date}}
[
ip{{todo.ip}}
]
{{ todo.summary }}... expand »
{{ todo.text }} « collapse
First  |  Prev  |   1   2  3  {{current_page-1}}  {{current_page}}  {{current_page+1}}  {{last_page-2}}  {{last_page-1}}  {{last_page}}   |  Next  |  Last
{{todos[0].name}}

ADVERTISEMENT
This page was tagged for
Pirates of the Caribbean: Salazar's Revenge english movie
Pirates of the Caribbean: Salazar's Revenge reviews
release date
Johnny Depp, Javier Bardem
theatres list
Follow @fullhyderabad
Follow fullhyd.com on
About Hyderabad
The Hyderabad Community
Improve fullhyd.com
More
Our Other Local Guides
Our other sites
© Copyright 1999-2009 LRR Technologies (Hyderabad), Pvt Ltd. All rights reserved. fullhyd, fullhyderabad, Welcome To The Neighbourhood are trademarks of LRR Technologies (Hyderabad) Pvt Ltd. The textual, graphic, audio and audiovisual material in this site is protected by copyright law. You may not copy, distribute, or use this material except as necessary for your personal, non-commercial use. Any trademarks are the properties of their respective owners. More on Hyderabad, India. Jobs in Hyderabad.