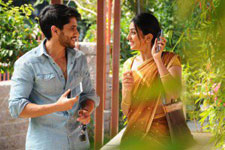 Swaroop Thotada / fullhyd.com
EDITOR RATING
5.0
Performances
Script
Music/Soundtrack
Visuals
6.5
2.0
5.0
6.0
Suggestions
Can watch again
No
Good for kids
Yes
Good for dates
Yes
Wait for OTT
Yes
While Kalyan Krishna was basking in the glory of his debut, he got a call from Nagarjuna one fine afternoon. Nagarjuna wanted Kalyan to direct a film for his son. Being the dexterous entrepreneur that he is, Nagarjuna figured out that Chaitanya was at that juncture in his career where a "wholesome family entertainer" like Ninne Pelladatha was long overdue.

And being the loyal person he is, Kalyan accepted the offer. A dozen coffees and cookies were devoured and a case of beers were obliterated, but Kalyan couldn't quite pin down in his mind what worked the magic in that '90s crowd puller. After hours of excruciating brainstorming, a brilliant idea sprang up in his mind. Why make something like Ninne Pelladatha? Why not make Ninne Pelladatha itself?

"Surekha" cried out Kalyan in exploding excitement (Eureka morphed to reflect the much needed Telugu-nativity - hope the readers don't mind). And the rest is history. And physics and chemistry. Except, the physics is derived from Telugu movie-verse where the flight of the bouncing fighters is directly proportional to the plight of the hapless audiences whose only sin is to expect a pinch of entertainment. As the film is about to crashland, the "chemistry" somehow comes to the rescue and just about veers the film away from being a total disaster, thanks to its lead pair.

Rarandoi Veduka Chuddam pretends for a while that it is a chronicle of the travails of a self-centered and naïve village girl Bhramaramba (Rakul Preet Singh) and her enduring boyfriend Shiva (Naga Chaitanya), and that works to an extent. Evidently, much of the thought has been dedicated to carving out the Bhramaramba character, and it shows potential, but when the film comes to reap from that, it employs tedious melodrama that is not helped by the overtly theatrical performances of the supporting characters.

Chaitanya oozes confidence and Singh takes quite a bite off the meaty role she is given, and just as the two are about to breathe some life into the plot, the film nips them in the bud and ditches this thread to fulfill its Ninne Pelladatha aspirations. That's a shame because the movie could have been its own story had it stuck to tell what it started to. You can see how the film at its heart is about a deluded girl who has been waiting for Prince Charming while the guy who truly loves her is by her side all along, waiting for her to get off the high horse.

The pivot results in the rest of the film turning a disjointed affair devoid of any rhyme or charm. The first hour mostly badgers you with stale humour from hyperventilating comedians and a story that goes nowhere. Having no clue of how to pull it all off, the film employs every trick in the book and imports every known comedian and character artist, and finally ends up cluttered with clichés.

The only saving grace of the film turns out to be a scene in the second hour where the leading pair vent out their mutual displeasure at each other after a prolonged silent suffering wears them off finally. This sequence walks a tightrope where it has to be hilarious and purposeful at the same time, and Naga Chaitanya and Rakul Preet Singh nail it, soaring above the mediocre plot and unremarkable narration. Sadly, it is the only part that stands out in this hodgepodge.

Devi Sri Prasad seems to have dusted off the tunes his previous directors rejected and tried his luck making money off them. Only one song is decent, and the rest hope you are a smoker. The effervescent color palette, the boisterous guitar riffs passed off as heroic soundtracks, the exaggerated expressions passed off as lively acting and a half-baked story masquerading as family drama are all in sync with the mediocre spirit of the film. Sampath Raj as Bhramaramba's father and Kausalya as her mother deliver the usual melodrama, and Jagapathi Babu as Shiva's father tries his best to stand out.

It's a bad idea to remake a classic. It's an even worse one to freemake it.

Rarandoi Veduka Chuddam doesn't quite warrant the ridicule we regularly mete out to mediocre films, for it had a heart after all. But there are not many good things you can say about it. And that makes writing a review so difficult and monotonous, as you need to resort to a tedious description of the film's promises and failings. Perhaps that way, this review is in solidarity with the film. Now you can make your decision.
Share. Save. Connect.
Tweet
RARANDOI VEDUKA CHUDHAM SNAPSHOT 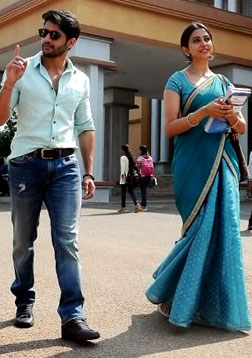 See Rarandoi Veduka Chudham full details
TOP COMMENT
The Common Movie Goer on 28th May 2017, 6:30am | Permalink
I am stealing and freeusing the Surekha joke! Source may or may not be cited.
4
0
RARANDOI VEDUKA CHUDHAM USER REVIEWS
1 - 7 OF 7 COMMENTS
POSITIVE  |  NEGATIVE |  NEWEST  |  OLDEST  |  MOST HELPFUL  |  LEAST HELPFUL
Naveed on 2nd Jul 2017, 9:58pm | Permalink
This is the reason i visit fullhyd.com every week. The reviews are always far more entertaining than actual movie. Kudos to fullhyd team.
rahulsachinsourav123 on 7th Jun 2017, 2:14pm | Permalink
While I agree on the entire review (funny and creative as well :)), not sure about the rating. I think such a negative review deserves much lesser rating as 5 is for average movie going by FullHyd standards. Also camera work and cinematography should have got a mention as they were the only saving graces which showed Vizag, Beaches, Araku, its roads, gardens and surroundings so beautifully.

Most of Chai's movies are really entertaining. Josh, Thadaka, Autonagar, Premam, SSS, Dochay (even though it's a short film ripoff) etc. Sure, he has problems with diction and dancing, but he is definitely improving every movie. Maybe not the dance, the Akkinenis aren't great dancers either way! Dude's humble, and takes criticism very well. Going by how entertaining his movies are, and how his movies are more hit than miss for me, I hope he will become an official top 4 hero soon.
Vara on 28th May 2017, 11:45am | Permalink
I hope thats a sarcastic one :)
JayZ on 28th May 2017, 7:59am | Permalink
You say he is improving every time...that means he is been given so many opportunities to improve.Would he have got so many if he was not a star son? The only " anaadha" in Tollywood today is NANI...and he needed to be crazy talented to survive...and even he doesn't get big projects from big directors...he selects a good script and makes it work..
JayZ on 29th May 2017, 10:49am | Permalink
P.S. for the PC peopl.. Anaadha here means not a star son....not the literal meaning orphan
Josh on 27th May 2017, 11:35pm | Permalink
No.
Josh on 27th May 2017, 9:02pm | Permalink
Surekha! :D
LEAVE A COMMENT
fullhyd.com has 700,000+ monthly visits. Tell Hyderabad what you feel about Rarandoi Veduka Chudham!
MORE MOVIES
Latest Reviews
Don't Worry Darling
Vikram Vedha
Ponniyin Selvan - 1
Naane Varuvean
Nene Vasthunna
more
Krishna Vrinda Vihari
Saakini Daakini
Where the Crawdads Sing
Everything Everywhere All At...
Aa Ammayi Gurinchi Meeku Che...
Brahmastra: Part One - Shiva
Oke Oka Jeevitham
Brahmastra: Part One - Shiva
Ranga Ranga Vaibhavanga
First Day, First Show
Contemporary Reviews
Wonder Woman (3D)
Baywatch
Fashion Designer s/o Ladies ...
Dobaara: See Your Evil
Baywatch (Telugu)
more
Baywatch (Hindi)
The Mummy
Sachin: A Billion Dreams
Pirates of the Caribbean: Sa...
Hindi Medium
Half Girlfriend
Keshava
King Arthur: Legend of the S...
Meri Pyaari Bindu
Random Reviews
Hadh
Mee Sreyobhilashi
Salute (Vijaykanth)
Love Today
Arjun Pandit
more
Evandoi Srivaru
Manoharam
The Forbidden Kingdom
Ganesh (2009)
Break Ke Baad
Veedu Theda
The Collection
Varna
Veera Bhoga Vasantha Rayalu
Chakra
SEARCH MOVIES
Dissatisfied with the results? Report a problem or error, or add a listing.
ADVERTISEMENT
SHOUTBOX!
{{todo.name}}
{{todo.date}}
[
ip{{todo.ip}}
]
{{ todo.summary }}... expand »
{{ todo.text }} « collapse
First  |  Prev  |   1   2  3  {{current_page-1}}  {{current_page}}  {{current_page+1}}  {{last_page-2}}  {{last_page-1}}  {{last_page}}   |  Next  |  Last
{{todos[0].name}}

ADVERTISEMENT
This page was tagged for
rarandoi veduka chudham full movie in telugu
Rarandoi Veduka Chudham telugu movie
Rarandoi Veduka Chudham reviews
release date
Naga Chaitanya Akkineni, Rakul Preet Singh
Follow @fullhyderabad
Follow fullhyd.com on
About Hyderabad
The Hyderabad Community
Improve fullhyd.com
More
Our Other Local Guides
Our other sites
© Copyright 1999-2009 LRR Technologies (Hyderabad), Pvt Ltd. All rights reserved. fullhyd, fullhyderabad, Welcome To The Neighbourhood are trademarks of LRR Technologies (Hyderabad) Pvt Ltd. The textual, graphic, audio and audiovisual material in this site is protected by copyright law. You may not copy, distribute, or use this material except as necessary for your personal, non-commercial use. Any trademarks are the properties of their respective owners. More on Hyderabad, India. Jobs in Hyderabad.