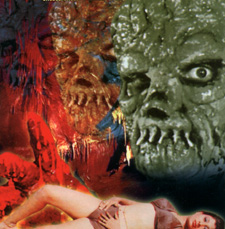 Christopher Domingo / fullhyd.com
EDITOR RATING
1.0
Performances
Script
Music/Soundtrack
Visuals
NA
NA
NA
NA
Suggestions
Can watch again
NA
Good for kids
NA
Good for dates
NA
Wait to rent it
NA
An excellent comedy! For all its supposed horror, this one will do nothing but make you laugh. It is a common fact that most B-grade horror flicks are viewed for one reason only - nudity. The rest is just nonsense, and the monsters are nothing but figments of childish imagination. These murderous creatures wouldn't scare a kid. One has seen cartoons that are scarier than these idiotic creatures. The very name Khooni Panja (murderous fist) is enough to crack you up. As for the horror, it is non-existent.

Ajit, a rich businessman, is having an affair, and one fine day is caught red-handed by his wife. Unable to take the heat, Ajit and his mistress kill the innocent wife and bury her in the graveyard. Her dying words are that she will come back to avenge her death. If you are wondering where you have heard this before, hey, it's common to every other horror film.

Time flies, and, amazingly, nobody suspects that Ajit's wife is missing. Everything is running smoothly till a group of young girls in tight uniforms decides to play volleyball near a graveyard (why there?!), and, as fate would have it, the ball lands in the yard. A young girl Pinki decides to retrieve it. The languishing soul of the innocent wife possesses our dear Pinki, who happens to be Ajit's younger brother Ajay's fiancée (how convenient).

If this film is scary, then I'm the Prince of Gwalior.
Share. Save. Connect.
Tweet
KHOONI PANJA SNAPSHOT

ADVERTISEMENT
This page was tagged for
???? ?????? nude
Khooni panja movie deleted seen
khooni panja movie
hindi.movie.khooni.panja
Khooni Panja hindi movie
Follow @fullhyderabad
Follow fullhyd.com on
About Hyderabad
The Hyderabad Community
Improve fullhyd.com
More
Our Other Local Guides
Our other sites
© Copyright 1999-2009 LRR Technologies (Hyderabad), Pvt Ltd. All rights reserved. fullhyd, fullhyderabad, Welcome To The Neighbourhood are trademarks of LRR Technologies (Hyderabad) Pvt Ltd. The textual, graphic, audio and audiovisual material in this site is protected by copyright law. You may not copy, distribute, or use this material except as necessary for your personal, non-commercial use. Any trademarks are the properties of their respective owners. More on Hyderabad, India. Jobs in Hyderabad.