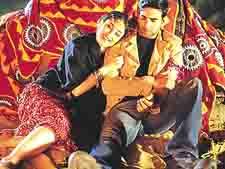 Manju Latha Kalanidhi / fullhyd.com
EDITOR RATING
1.0
Performances
Script
Music/Soundtrack
Visuals
NA
NA
NA
NA
Suggestions
Can watch again
NA
Good for kids
NA
Good for dates
NA
Wait to rent it
NA
Take a hapless Maa who screams her guts out, "Bhagwan ke liye use chhod deejiye, main aapke paav padti hoon!"; give her a daughter who screams her guts out, "Arrrjooooon bhaiyyyaaaaaaa, mujhe bachaooo, Arjoooooon bhaiyaaaaaa....aaa!"; add a bonus son Arjun who can take on anybody, jump off cliffs and save anyone while he screams his guts out "Maaaaaaa, Phooojhaaaaa, main aaarahhaaa hooooon!"; and bingo! You have the first half of Talaash ready.

Now, split the girl Pooja from the happy family, make the Maa deranged because of her daughter's loss, and we have Arjun going about the Talaash, the search for his sister. Don't forget to add a signature family tune (Zindagi ki jung, jeet lenge hum) here. 1-2-3, you have 'The Hunt Begins'.

Club the two halves and abracadabra, you have Talaash - The Hunt Begins. Oh yeah, it does. In the first half, you are busy searching for some sanity, logic and commonsense. In the second half, you are hunting for the director and his crew who brought together this agonizing search. 'Talaash - The Hunt Begins' is case of the hunter being hunted. Where the crew themselves are at the danger of being hunted by irate viewers.

The movie is so genuinely trashy that even a decent star cast like Akshay Kumar, Kareena Kapoor and Pooja Batra fails to redeem it. The movie has distinct shades of a typical Mithun Chakraborthy flick - a code song that unites the family, a hysterical and pesky Mom, a dumb sister and a dumber girlfriend. Only, this time, instead of good old Ooty, we have South Africa for the masala numbers.

After a series of very painful incidents, Arjun (Akshay Kumar) is left with a widowed and deranged Mom and a missing sister. Now in order to help his mom recover, he has to search for his sister who is in the clutches of underworld baddie Chote Pathan (Kabir Bedi). He seeks the help of the police as quid pro quo for a favor he had done them earlier, and manages to trace her. But in order to get to his sister, he needs to befriend the underworld.

He feigns love with Tina (Kareena Kapoor), daughter of an underworld don. Using them as pawns and his smart aleckiness, he rescues his li'l sis. Since the sis and bro haven't met in 10 years, they sing their code song. The movie ends with all them of them once again screaming their guts out: Arjooooon bhaiyaaaa, Phooojaaaa and Maaaaa. Oh okay, we also have Kareena joining the fray to say Maaa jeeee!

Akshay Kumar gets his bit of action - swirling cars, state-of-the-art silencers and superhuman stunts. Kareena Kapoor plays a rich and stupid girl who keeps falling all over men to show how hot she is. She sings, dances, pouts and generally succeeds in irritating the hell out of you. Pooja Batra, as the underworld moll, is far more tolerable, primarily because she gets bumped after a half-hour of her entry. Some unidentified actress plays Pooja, Arjun's lost sister, and true to her character, she also looks lost and listless.

The music is good when compared to the movie, but nothing outstanding. Kareena's 'Dil Le Ke Gaya Pardesi' reminds one of sis Karisma's Pardesi number in Raja Babu. But big deal - when we have so many déjà vu elements, what's one number?

To cut the whole damn boring story short, if you are looking for an exciting search, junk Talaash - The Hunt Begins. Try Google instead. It's fast, easy and painless.
Share. Save. Connect.
Tweet
TALAASH SNAPSHOT

ADVERTISEMENT
This page was tagged for
Columbus Talaash
talaash hindi movie
Talaash hindi movie
Talaash reviews
release date
Follow @fullhyderabad
Follow fullhyd.com on
About Hyderabad
The Hyderabad Community
Improve fullhyd.com
More
Our Other Local Guides
Our other sites
© Copyright 1999-2009 LRR Technologies (Hyderabad), Pvt Ltd. All rights reserved. fullhyd, fullhyderabad, Welcome To The Neighbourhood are trademarks of LRR Technologies (Hyderabad) Pvt Ltd. The textual, graphic, audio and audiovisual material in this site is protected by copyright law. You may not copy, distribute, or use this material except as necessary for your personal, non-commercial use. Any trademarks are the properties of their respective owners. More on Hyderabad, India. Jobs in Hyderabad.