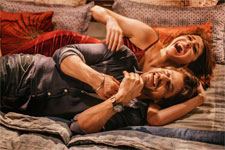 Two men who have been accused of rarely veering away from their tried and tested paths join hands with When Harry Met Sejal. Ali and his proclivity for tweaking the same basic story over and over again with every new project (except for Highway) combines with Shahrukh "please stop making romance/unfunny movies because you actually have so much more range" Khan.

In an interview, the "King" Khan (talking about his future projects) made the statement (being paraphrasing here) "I'm branching out from the so-called Shahrukh formula. Hopefully the audience sees and appreciates my efforts." Well, here we go Mr. Khan - I am a fan of most of your work (including the divisive latest ones Raees and Dear Zindagi), and was sitting amongst many other such fans hoping you'd surprise us with your latest offering. Alas.

From what I could glean (from in between the screams of a few young ladies) the movie tells the story of a Lothario named Harry - absconding from Punjab, now Canadian citizen and European tour guide - and a girl named Sejal who has lost her an engagement ring which is very important to her fiancée. The duo travels across Europe attempting to locate said ring while the film attempts to find some sort of romantic connection between the broken and distraught Harry and manic pixie Sejal.

As mentioned, this story has been done to death by Ali. The plot is so thin that even wafers would feel offended being compared to it: girl thinks a guy is awesome and is engaged to him, but runs into the guy the movie thinks is awesome, and by the end of the circumstances the film puts the duo through, girl comes to the conclusion that the guy the movie said is awesome is indeed awesome. Basic rom-com formula achieved.

I somehow secretly feel that Ali has one of those punch cards you get at McDonalds' where you get a free Coke if you eat there 10 times, with the only difference being that Ali's card promises him a pass into the pantheon of illustrious rom-com directors if he makes the same movie 10 times. You're getting close, bro - a few more whacks at the same story and you might get a chair next to the late Gary Marshall.

An emaciated plotline needs an engaging screenplay, towering performances and the pace to keep itself from being labelled banal. Sadly, Jab Harry Met Sejal drops the ball on two of those three requirements. While the lines are intermittently funny, the locales said lines are being uttered at are beautiful and one of the lips those lines are coming out of is distracting, the film slowly but surely loses steam as it tries to fill into its surprisingly long runtime. The need to move from locale to locale becomes flimsier by the minute; while each locale offers up at least a moment of genuine emotion, it is quickly subdued by an unnecessary song or a contrived plot point.

While the aforesaid locales are sights for sore eyes, they are no match for the lead actors carrying the film square on their shoulders. Shahrukh Khan, who is still struggling to find a niche for himself as he jogs into his mid-50s, is in rare form. It's performances like this one that remind you that the man has so much to offer in terms of onscreen prowess, but owing to a multitude of reasons, his talent as an actor is frugally explored. While the character written for him ails from a deficiency of character moments, the man himself adds a whole host of pain, sadness and loneliness to it with those world-weary eyes. The tender moments he shares with his co-star Anushka Sharma, while few and far between, leave you wanting more each time. There is so much chemistry in the air.

Khan's sorrow appears genuine, Sharma's self-realization comes off as profound, and the moments the film creates where these jagged edges align with each other are truly mesmeric even if these scenes are drowned in a sea of superfluous side-quests.

Their character motivations and reasons for being, while not well elaborated by dialogue, are rendered clearly by a few memorable tracks. The score is pleasant but also sets scenes up pre-emptively. This might rob an attentive viewer of any tension as he/she might know what is unfurling on screen way before the film organically reaches said juncture.

Engaging screenplays are hard to come by because an engaging screenplay needs a compelling conflict. While Ali's previous works Highway, Rockstar, Jab We Met, Tamasha etc. while imperfect had conflicts, and dramatic and thematic elements that wove their characters together, Jab Harry Met Sejal is as flimsy as its conceit.
Share. Save. Connect.
Tweet
JAB HARRY MET SEJAL SNAPSHOT 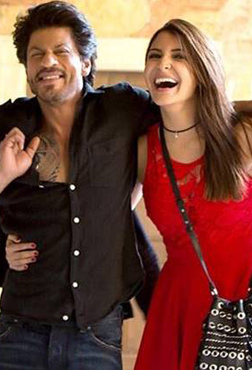 See Jab Harry Met Sejal full details
JAB HARRY MET SEJAL USER REVIEWS
1 - 2 OF 2 COMMENTS
POSITIVE  |  NEGATIVE |  NEWEST  |  OLDEST  |  MOST HELPFUL  |  LEAST HELPFUL
JayZ on 5th Aug 2017, 8:52am | Permalink
Donno why Imtiaz Ali loves coming of age films.he always makes the same films over and over...
TJ Reddy on 5th Aug 2017, 10:12am | Permalink
Guess it's his niche
Kanye on 5th Aug 2017, 2:47am | Permalink
I understand how the film is mediocre from a critic's standpoint, but my only question is if its good for the common audience? Like, would I enjoy it if I walked in with zero expectations?
Siva on 5th Aug 2017, 9:16am | Permalink
Why do you think critic goes in with "expectations"? Did you actually mean go without his brain?

Messers TJ Reddy/Swaroop/Josh may have more to add.
Kanye on 5th Aug 2017, 6:44pm | Permalink
I didn't mean it like that. The review simply implies that the movie isn't satisfactory. I want to watch the film though because I am a rom-com lover. But then again there are horrible movies such as Befikre. All I wanted to know is if the movie is worth watching once in the theaters. He didn't really address this, so I was just leaving a comment to see his suggestion. No disrespect, I still liked the review.
TJ Reddy on 5th Aug 2017, 10:07am | Permalink
Great point of view Siva. There is a lot to go into with every film if us reviewers were to dissect every aspect of it. The fact is most general audience members look for a good time at their local cinema with a bunch of friends. We do try to cater to that while trying to educate said people on some technicalities.

As you said all we want to do is have a good time at the cinema
TJ Reddy on 5th Aug 2017, 4:49am | Permalink
Well Kanye.. the thing is the film is quite enjoyable is it was playing in the background and you were watching it as priority two.. the fact is when you're applying yourself fully and watching this film, it's meandering pace and lack of genuinely good moments will have you feeling bored..

ADVERTISEMENT
This page was tagged for
jab harry met sejal movie in hindi dubbed
Jab Harry Met Sejal hindi movie
Jab Harry Met Sejal reviews
release date
Shah Rukh Khan, Anushka Sharma
Follow @fullhyderabad
Follow fullhyd.com on
About Hyderabad
The Hyderabad Community
Improve fullhyd.com
More
Our Other Local Guides
Our other sites
© Copyright 1999-2009 LRR Technologies (Hyderabad), Pvt Ltd. All rights reserved. fullhyd, fullhyderabad, Welcome To The Neighbourhood are trademarks of LRR Technologies (Hyderabad) Pvt Ltd. The textual, graphic, audio and audiovisual material in this site is protected by copyright law. You may not copy, distribute, or use this material except as necessary for your personal, non-commercial use. Any trademarks are the properties of their respective owners. More on Hyderabad, India. Jobs in Hyderabad.