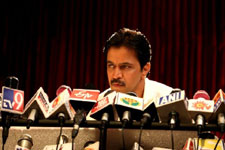 Deepti Girotra / fullhyd.com
EDITOR RATING
3.5
Performances
Script
Music/Soundtrack
Visuals
3.0
3.0
4.0
5.0
Suggestions
Can watch again
No
Good for kids
No
Good for dates
No
Wait to rent it
Yes
The one thing that stays with you once you have left the theatre after watching Jai Hind 2 is the number of clichés that the movie is full of, and a deep sigh for how good a movie this could have been. Besides the facts that the film reminds you of (Shankar's) Gentleman, and that there are a lot of unnecessary songs and comedy sequences, Jai Hind 2 has at its heart a very pertinent issue - that every child in this country should have the right to good education and the freedom to dream. Too bad the dream gets lost in the big mess of unnecessary twists and masala.

Lest we do the same, let us get to the plot. Abhimanyu (Arjun), an orphan, is a paragon of virtue - a computer engineer who teaches martial arts to the poor kids of his locality and beats up the bad guys in his spare time. Nandini (Surveen Chawla) falls in love with him, her parents follow suit, and all is well... well, almost.

Abhimanyu comes across Parvati (Yuvina Parthavi, one of the cutest movie kids ever) and her parents - carpenter Chandu (Shafi) and Lakshmi who dream of their daughter studying in a good school (read private, expensive school). The wildest dreams of the family come true when Parvati is admitted into one of the best schools in the city.

But the dream quickly turns into a nightmare, when Chandu and Lakshmi, in a state of despair at not being able to pay the school's fee even after Chandu sells his kidney, commit suicide after feeding poison to their little daughter.

This is a portion of the movie that has the potential to shake you up, though it is not executed as well as it could have been and therefore cannot be compared to Gentleman, which also spoke about the theme of education. It does manage to affect Abhimanyu, however, who commendably decides to do something about it. So he calls a press meet and speaks about the idea of nationalizing all private schools, thereby maintaining the quality of education and also ensuring that every child has access to such.

This does not go down with some of the owners of the said private institutions, who plot to get him killed or have him jailed on a trumped up murder charge. This is where the movie shifts tracks and simultaneously loses its path completely. The entry of notable actors Rahul Dev, Ravi Kale and the beautiful but blank Charlotte Claire, in pointless cameos, complicates matters further, and the "Action King" Arjun is forced to kick, punch and shoot his way through to the climax (a straight lift from Ghajini - no kidding), which brings you tears ...of relief.

Jai Hind 2 is a movie that makes you sad and glad. It gladdens your heart to see Arjun fighting fit, literally, even in his fifties. The fights are in fact among the very few good things about this film - well-choreographed and relentless. If only the same could be said about the meandering direction, the uninspired performances and the forgettable background and music track. You are really glad to see Brahmanandam make an early entry onto the screen. There are points in the movie where you yearn to get lost in one of the comedy king's flashbacks instead of staying with the film, even though these tracks have absolutely no connection with the plot of the movie.

Making an impression is actor Atul Mathur, who makes an entry as the paan-chewing villain Vikram Thakur. Hopefully we will get to see much more of him in the future, as his performance shows unexploited potential. Sadly, the build-up given to this character is rudely and quickly snuffed out at the climax.

The costume and make-up departments of this film show you that it is possible to make even attractive people like Surveen Chawla, Arjun and Charlotte Claire look cakey, wrinkly and absurd at times. The music by Arjun Janya is forgettable. The cinematography by H C Venugopal has a few moments, but they get lost in the many, many clichés which take the film far away from what it should have been, and (you hope) was probably conceptualized as.

It is sad that such an important and pertinent message should have been entrusted to such a flawed carrier. Arjun the director fails to make a mark, so Arjun the actor has to shoulder the entire responsibility of the film, which at times proves too much for even his rippling muscles.

Take a chance with this one only if you are a die-hard Arjun fan, and carry enough popcorn and soda to while away the time.
Share. Save. Connect.
Tweet
JAI HIND 2 SNAPSHOT 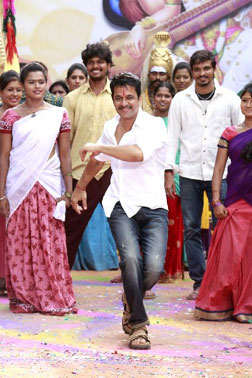 ADVERTISEMENT
This page was tagged for
Jai Hind 2 telugu movie
Jai Hind 2 reviews
release date
Arjun, Surveen Chawla
theatres list
Follow @fullhyderabad
Follow fullhyd.com on
About Hyderabad
The Hyderabad Community
Improve fullhyd.com
More
Our Other Local Guides
Our other sites
© Copyright 1999-2009 LRR Technologies (Hyderabad), Pvt Ltd. All rights reserved. fullhyd, fullhyderabad, Welcome To The Neighbourhood are trademarks of LRR Technologies (Hyderabad) Pvt Ltd. The textual, graphic, audio and audiovisual material in this site is protected by copyright law. You may not copy, distribute, or use this material except as necessary for your personal, non-commercial use. Any trademarks are the properties of their respective owners. More on Hyderabad, India. Jobs in Hyderabad.