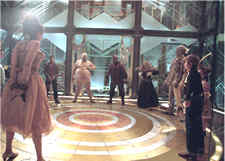 The movie tries to be doomsday-ish and ends with a whimper, but no complaints here. You have all the blood and gore you need, and some really cool ghosts, too - just the kind you would invite on Halloween. The ambience is spooky without being funny, and the music could have been composed by the specters of Bach and Stravinsky as it fits right in. And the house! A glass house with Latin curses and counter-curses inscribed all over, ghosts in the basement and machinery in the attic, and bathrooms with naked girls bathing in blood! Whoa! Could you ask for more from a horror flick?
Share. Save. Connect.
Tweet
13 GHOSTS (ENGLISH) SNAPSHOT

ADVERTISEMENT
This page was tagged for
13 Ghosts (English) english movie
13 Ghosts (English) reviews
release date
F Murray Abraham, Tony Shalhoub
theatres list
Follow @fullhyderabad
Follow fullhyd.com on
About Hyderabad
The Hyderabad Community
Improve fullhyd.com
More
Our Other Local Guides
Our other sites
© Copyright 1999-2009 LRR Technologies (Hyderabad), Pvt Ltd. All rights reserved. fullhyd, fullhyderabad, Welcome To The Neighbourhood are trademarks of LRR Technologies (Hyderabad) Pvt Ltd. The textual, graphic, audio and audiovisual material in this site is protected by copyright law. You may not copy, distribute, or use this material except as necessary for your personal, non-commercial use. Any trademarks are the properties of their respective owners. More on Hyderabad, India. Jobs in Hyderabad.