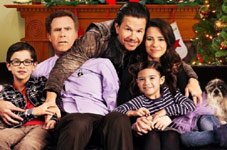 Josh / fullhyd.com
EDITOR RATING
3.5
Performances
Script
Music/Soundtrack
Visuals
7.0
3.0
6.0
6.0
Suggestions
Can watch again
No
Good for kids
No
Good for dates
No
Wait to rent it
Yes
Brad (Will Ferrell) is a stepfather. But what he truly wants to be is a dad. The difference between a dad and father, explained at the very beginning of the movie, is that any guy can be a father but being a dad is about parenting. So he slogs it out to pack lunchboxes for the kids of his wife (Linda Cardellini), takes them to aquariums, and cheerfully puts up with their drawings depicting him as a corpse or with poop on his head.

Entering the picture is the real father Dusty (Mark Wahlberg), the diagonal opposite of the meat-and-potatoes variety of dad that Brad is. Dusty is suave, built, adventurous and needlessly competitive. For no reason other than contest, he tries to win back his kids, and seems to be doing a very good job, thus unsettling Brad to his foundations. The ensuing tussle for affections is supposed to be the comedic crux of the film.

The problem with the characters is that they are about as archetypal as flip-phones are extinct. Ferrell's Brad comes across as a complete goofball with practically no redeeming features to inspire confidence, and Wahlberg's Dusty, written with the laziness of a python wrapped around a branch digesting its meal, is supposed to be the man's man with practically no flaws except that he can't handle family life.

As things go from bad to worse, the other characters all seem to live in a void which is happily unaware of the unhealthy duel between these two men. Sarah, the wife, is surprisingly blind to the circumstances, and lets them escalate when she could have ideally asked Dusty (the chief disrupting element) to leave. But of course, she can't do that because then there would be no ruse for ushering in the comic situations.

However, most of these comic situations are laboured and predictable. Ferrell and Wahlberg act like Stephen King wrote and personally handed them the script, but they can't salvage what is essentially mediocre and formulaic. The movie has troubles keeping you engaged and often loses you on the way. And for all the kids in the film, it isn't even particularly kid-friendly. What with all the penile humour. Sorry, only penile, no humour.

None of the technical departments particularly stands out. There are the standard colours of a family comedy and a nothing-to-complain-about score. And the direction often slips up some opportunities of better realisation of some good writing.

Daddy's Home would still work for the performances and occasional gag (Thomas Church is fun when he in on screen) if it wasn't such straight-faced hypocrisy. Although the final claim is that Brad is a great dad, you can see through the film that he never gets his due, and thus the film conveniently trivialises earnest parenting. His time comes when Dusty realises that he can barely take a day of heavy-duty dadding. For all the insecurity and heartbreak he has to go through, that is Brad's big success - that Dusty is no good dad.

To fully appreciate the shallowness of this plot, consider a film where a girl suffers loss of self-worth and a relationship due some other femme fatale whisking her boyfriend away. What is a happy ending for such a character? One where she overcomes the situation and nurtures self-respect, or one where the boyfriend comes back to her because the other woman opts out?

Daddy's Home doesn't make a case for involved parenting. It doesn't make you laugh for over three-quarters of its runtime. What it does amply is show you how much actors like Ferrell, Wahlberg, Church and Cardellini deserve better scripts.
Share. Save. Connect.
Tweet
DADDYS HOME SNAPSHOT 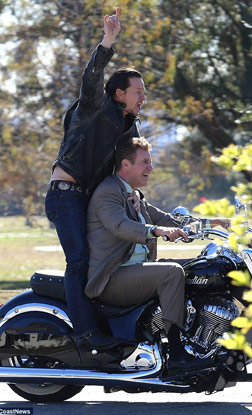 ADVERTISEMENT
This page was tagged for
Daddys Home english movie
Daddys Home reviews
release date
Will Ferrell, Mark Wahlberg
theatres list
Follow @fullhyderabad
Follow fullhyd.com on
About Hyderabad
The Hyderabad Community
Improve fullhyd.com
More
Our Other Local Guides
Our other sites
© Copyright 1999-2009 LRR Technologies (Hyderabad), Pvt Ltd. All rights reserved. fullhyd, fullhyderabad, Welcome To The Neighbourhood are trademarks of LRR Technologies (Hyderabad) Pvt Ltd. The textual, graphic, audio and audiovisual material in this site is protected by copyright law. You may not copy, distribute, or use this material except as necessary for your personal, non-commercial use. Any trademarks are the properties of their respective owners. More on Hyderabad, India. Jobs in Hyderabad.