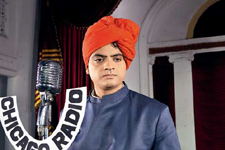 Kritika Deval / fullhyd.com
EDITOR RATING
3.5
Performances
Script
Music/Soundtrack
Visuals
3.0
3.0
3.0
3.0
Suggestions
Can watch again
No
Good for kids
Yes
Good for dates
No
Wait to rent it
No
Swami Vivekananda gets its facts right. You have to give it that. But that's about all you can give it. Not praise. Not patience. Not even your attention.

Oh, dear lord. Where do we begin?

First and foremost, casting only children was an obvious ploy to fish exactly for your praise, patience and attention. Some of these kids are obviously talented, but only some.

Master Prabhat, who plays the venerated Swami, is obviously not one of their count, as is obvious right at the beginning. The kid looks the part, but is glum and dull, without a spark of intellect to mar the uniform moroseness of his visage. Therefore, the sense of ridiculousness of the proceedings is pretty much all you have on your mind for the rest of the film.

Because it is all indeed ridiculous in the extreme, right from the forcedly adult expressions on the childrens' faces to Master Prabhat's bovine face - whether he is playing football of wondering at social iniquities even at a temple or giving a rousing speech imploring humanity to loose its hold on inertia. The excellent oration on part of the voice actors further increases the sense of disorientation.

Then comes the equally laughable cinematography and "special effects", both of which, in another movie, could've been tolerable, but in this biopic only serve to enhance the braindead quality of the rhetoric in play.

In the near-tradition of cinematic rendition of Indian mythology, the development of this film too is retarded by a retarded attempt at mingling the mythic and the factual. So on the one hand you see seemingly-realistic representations of Swami Vivekananda's trials, tribulations and achievements, and on the other you have exaggerated reactions on part of all other characters, all falling over their own and each others' feet to show how awed they are by the Swami's presence.

Why? Just why did we need to see near-orgiastic expressions on the face of a girl who is probably 11, albeit in supposed piety and not in any adult situation? Where is, if it was indeed necessary to make this a project involving only children, the need to try and bring up performances to caricaturish approximations of adulthood? The whole venture could've been utterly charming if children were allowed to be children.

This is a story that needs to be told with honesty and verve. Swami Vivekananda was an immeasurable treasure to our nation, as important spiritually as politically. Instead, it has been superficialised to such an extent as to render the character of the Swami into a caricature of himself.

It is with the uncomfortable feeling of having kicked a defenseless puppy, then, that this writes critiques this film to such an extent, by virtue of the aforementioned ploy. The whole movie has the feel of a badly-directed school play, to be enjoyed most by parents of the cast who would praise the hammiest of work, and to be ridiculed even more by parents whose children are not involved.

Either way, you can wait for a better film to be made on Vivekananda's life to educate your own children upon its vagaries.
Share. Save. Connect.
Tweet
SWAMI VIVEKANANDA SNAPSHOT 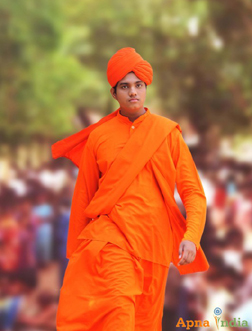 ADVERTISEMENT
This page was tagged for
Swami Vivekananda telugu movie
Swami Vivekananda reviews
release date
Prabhat, Pujith
theatres list
Follow @fullhyderabad
Follow fullhyd.com on
About Hyderabad
The Hyderabad Community
Improve fullhyd.com
More
Our Other Local Guides
Our other sites
© Copyright 1999-2009 LRR Technologies (Hyderabad), Pvt Ltd. All rights reserved. fullhyd, fullhyderabad, Welcome To The Neighbourhood are trademarks of LRR Technologies (Hyderabad) Pvt Ltd. The textual, graphic, audio and audiovisual material in this site is protected by copyright law. You may not copy, distribute, or use this material except as necessary for your personal, non-commercial use. Any trademarks are the properties of their respective owners. More on Hyderabad, India. Jobs in Hyderabad.