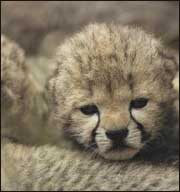 Deepa Menon / fullhyd.com
EDITOR RATING
7.5
Performances
Script
Music/Soundtrack
Visuals
NA
NA
NA
NA
Suggestions
Can watch again
NA
Good for kids
NA
Good for dates
NA
Wait to rent it
NA
Like its earlier, popular 3-D predecessor, Into The Deep, Africa - The Serengeti is a bewilderingly short film. While the former was more of a quick dip than a leisurely crawl on the ocean floor, the latter is a breathless series of panoramas rather than a down-and-dirty safari. So the more hardy wildlife enthusiasts may find their curiosity piqued to restlessness, but even they will have to admit that IMAX's latest on-screen goodie is a total stunner.

Thanks to the scale of the performance and the tightly edited 40-minute film, you are drawn in from the start and there's not a moment to look away, not a second wasted as the camera tracks the great migrating herds across the continent's most populated sanctuaries, the Serengeti plains, which cover vast areas of Kenya and Tanzania. The herd consists of almost two million animals, most of which are wildebeests, with a few zebra and antelope families tagging along for the ride. And what a ride.

Every year, the wildebeests travel from the south of the plains, their home, to the north and back again, in search for food. They follow their collective nose to where the monsoons are, because, as your narrator booms knowingly, "Where there is water, there is life".

Your eyes and ears are filled with most every detail of the journey; the sound is so perfect you can hear an antelope pulling up grass in a slow munch, your seat vibrates mildly to the satisfied snore of the lions, and your jaw gapes in horror as you hear the helpless clambering of hooves on wet stone, as a crocodile waits submerged for its meal. The camera is fearless as it locks gazes with a wild buffalo, covers the breadth of a lioness' yawn and follows a petrified antelope as it tears away from a cheetah.

Members of the audience did tend to flinch at the more carnivorous sights, like a lioness sinking her teeth doggedly into a wildebeest's jugular, or the dull thunk of bone as vultures and hyenas fought over the last morsels of a carcass. But the film is made for a general audience and explains patiently that on the Serengeti there is no malice and no remorse.

Perhaps that is the film's greatest achievement. We quote Animal Planet here with due credit, Africa - The Serengeti grabs you. You are involved, no matter how ambivalent your feelings might be toward animals in general, and Africa in particular. Your eyes widen to take in the sight of so many powerful beasts thundering towards food, water, survival. Your breath catches in your throat as you watch a baby foal, fluffy and dazed, struggling wildly to stand up, while bovine eyes watch anxiously from above.

Life happens along the way, with the birth and death of almost an equal number of animals. Balance is sustained. The weak fall prey to bad weather, starvation, drowning and, of course, fierce natural killers. Memories of other beloved movies will come to mind; Simba's land in The Lion King or Elsa's return to the wild in Born Free. Africa - The Serengeti is a film of a different place. A place that still has room for Nature to stretch languorously and watch her children roam.

ADVERTISEMENT
This page was tagged for
Africa - The Serengeti english movie
Africa - The Serengeti reviews
release date
James Earl Jones (narrator)
theatres list
Follow @fullhyderabad
Follow fullhyd.com on
About Hyderabad
The Hyderabad Community
Improve fullhyd.com
More
Our Other Local Guides
Our other sites
© Copyright 1999-2009 LRR Technologies (Hyderabad), Pvt Ltd. All rights reserved. fullhyd, fullhyderabad, Welcome To The Neighbourhood are trademarks of LRR Technologies (Hyderabad) Pvt Ltd. The textual, graphic, audio and audiovisual material in this site is protected by copyright law. You may not copy, distribute, or use this material except as necessary for your personal, non-commercial use. Any trademarks are the properties of their respective owners. More on Hyderabad, India. Jobs in Hyderabad.